Jhumpa Lahiri, in her novel, The Namesake, portrays the lives of several people within a single story. Be it the newly wed Indian Bengali immigrant couple in America, their own relationship, parenthood, and the lives of their foreign-born children. An adequate story.

The author of the novel also wrote another book with the title “Interpreter of Maladies,” for which she received the Pulitzer Prize in 2000. I’ve also read and written about that book, and you can also read my review of it here: Interpreter Of Maladies Book Review.

What is The Namesake by Jhumpa Lahiri?

The Namesake is the tale of a Bengali immigrant family from India and their life far away in America. Though the novel’s protagonist is Gogol, who was named after the Russian author Nikolai Gogol by his father. But the story also revolves around several people and their lives. Like about the protagonist’s father and his early years in the United States of America, or about the struggle of an Indian housewife to accept her new life in a different nation. And Gogol’s own quandary regarding his name and identity. 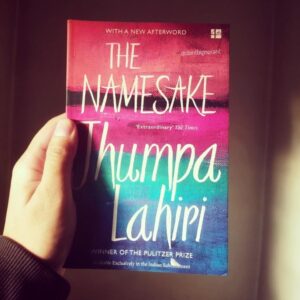 The story also portrays the concepts of fidelity and infidelity in marriage. Like Gogol’s mother, who remained loyal to her husband throughout her life. On the other hand, Gogol’s wife committed infidelity.

This book is not meant for everyone. I recommend this book to people who are no-nonsense readers. The language of the book is also not that hard.

These are the main characters of the novel:

Gogol- The protagonist of The Namesake

Sonia- The younger sister of Gogol

Maxine- The girlfriend of Gogol

These are the following points that I thought of after finishing the novel:

1. An immigrant’s life in a place far from his or her native place is a constant struggle between longing for the homeland and moving forward with life in his adopted country.

2. Staying in touch with one’s traditions and heritage in a foreign land is one of the most important parts of an immigrant’s life.

3. When an immigrant visits his family and friends in his home country, it is almost like a pilgrimage for that person.

4. It might be challenging for a woman to leave her motherland and relocate to a nation with entirely different customs and a different language with her husband (who works or resides abroad).

5. The lack of presence of an immigrant’s family and friends, especially during some important events like festivals, birthdays, the birth of a child, and others, makes them forlorn.

6. Sometimes the differences between the children of immigrants and their parents’ outlook towards life and people are so vast that it causes friction between them.

These are the following reasons on the basis of which you can consider reading this book:

• A story about one’s own identity and its importance

You can also order your copy of the book from Amazon India: The Namesake Book