Book Review, The Poison Of Love By KR Meera

The Poison of Love, and with a smile on her face she consumed that poisonous-love, while knowing very well that it was going to give her a slow and painful death. A story that reveals different facets of love and life. In fact, it’s a tale which tells that love could consume a person without their knowing in totality. The complete annihilation. That’s the power of Love. A tragic novel.

(What else is there now for me to view

I have experienced being in love with you.)

Being in love is a different feeling altogether. Either it could give you the necessary warmth to stay alive in the harshest winters or it could freeze you alive in the frost forever. Still, people search for love, while knowing subconsciously its harmful effects. That’s why love stories make people immortal. Especially, those with the tragic ending. Like the story of Laila-Majnu, Heer-Ranjha and others.

The protagonist of The Poison of Love, falls in love for someone too. But, her dreams had shattered when she encountered the reality. And that truth not only consumed her life. But, it also gave her a painful death.

What is The Poison of Love by KR Meera?

The Poison of Love by KR Meera is the tragic tale of a woman by the name of Tulsi. The latter not not only fell in love with Madhav. But she also eloped with him a few days before her marriage leaving her family, fiance, and everything else for the sake of him. Only to be betrayed by him later. 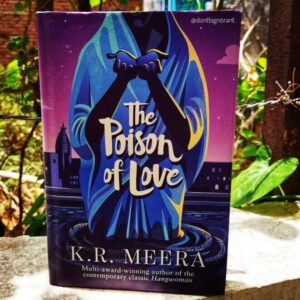 The Poison Of Love, A KR Meera Novel.

This book was originally written in the Malayalam language, titled Meerasadhu. And the English translation of the book is laudable. The language of the book is easy to read. And within a few hundred pages the author has finished the story.

She was a brilliant student of IIT (Indian Institute of Technology) Chennai, one of the premium education institutions of India. It was here that for the first time Tulsi met Madhav, a journalist. She met him through one of her friends by the name of Vinay. Slowly and steadily love brewed between the two. However, Tulsi was only seventeen years old at the time. And Madhav told her about his past relationships. In total he had twenty-seven women lovers, which was once a part of his life. Still, he said that he felt something different when he met Tulsi.

But, Tulsi’s father arranged her marriage with Vinay. In fact, Madhav also participated in the engagement ceremony. And Tulsi knew that she had feelings for Madhav, not Vinay. She was in a total dilemma about what to do and what not. Especially, when Madhav said that he couldn’t come into her marriage. Though, he wanted them to stay as friends forever.

And just a few days before her marriage with Vinay. Tulsi did the unthinkable. She eloped with her lover Madhav. Left her mother on her death-bed; her father and two sisters. She ran away with him to New Delhi as his bride. Without realising the consequences of it.

Madhav was irresistible. Like a magnet, he always pulled her near to him. She just can’t ignore him. The kisses which he gave to her. The love which he made to her. For her, it’s all surreal. But, within a few months of their marriage one of the ex-Gfs of Madhav came into their flat. She not only kissed Madhav but also hugged him tightly. Everything happened in front of Tulsi. Still, she ignored all of this. Though she showed her resentment. But Madhav always managed to persuade her.

In fact, with time she came to know about many unknown facts about her husband. That he was a womaniser. Still, she forgave him. She endured all the pain alone. She left her fiance, her mother, and father, for this man. Even her career she ruined just for him. And what she received, a man who just didn’t care about her.

In between all of this chaos, Tulsi gave birth to two children, but Madhav didn’t change. And she knew that sooner than later they would separate. That day also came. But, before that they made their last love. Tulsi knew this was her last love making. And they made love throughout the night. But, before Tulsi left everything. She gave poison to her two children. And left for Vrindavan, the city of the Lord Krishna and his infinite gopis (female lovers of Bhagwaan Krishna)

Before leaving for Vridavan (Meaning the forest of Tulsi, or Basil) , Tulsi tonsured herself. And when she entered the city of Madhav (one of the many names of Lord Krishna) she saw uncountable numbers of women like her. Some of them were abandoned by their father, husband, and family. She became one of them. Tulsi now became Meera Sadhu or Meera Mai! That’s her new identity.

With the old and abandoned widows she used to chant,

Betrayed by a Madhav, she came into the refuge of another Madhav. Days and nights went like that. But one day out of the blue, her beloved Madhav came to see his Tulsi. He came to ask for her forgiveness. But, that Tulsi now no longer existed. Only Meera Sadhu was there. Initially, she refused to meet him. But, even after going through all the unnecessary sufferings of life. She went to meet Madhav at the city hospital where he was admitted. He asked for forgiveness. He even asked her to go with him. But, she just smiled. And left him forever.

In fact, after leaving the hospital, Meera Mai deliberately made sure that the monkeys of the temple bite her ferociously. They did the same. In that way she wanted to unite with her Madhav. And with blood oozing out from her wounds, Tulsi lay down and waited for her last breath. So that she her soul became united with her beloved Madhav!

Best quotes of The Poison of love

These are some of the best quotes of the Poison of love by KR Meera.

1. In principle, love and spirit are but one. Both ache to break free from fetters and take possession of suitable bodies.

2. I never went seeking anyone. All of them came in search of me.

3. A marriage without mutual attraction is futile. It is like throwing your life down forcefully and watching it disintegrate.

4. Love has one fault. If you let go, it will fall. It will shatter on the ground. You should not let go.

5. I would teach him the meaning of beauty. With love, I would purify him too.

6. Travel can exorcise the restlessness of the spirit, as well as that of love.

7. There are no houses in Vrindavan. Every house is a temple. Krishna exists in every grain of this place.

8. Love me when you grow up. That love should be true. It should be real. Don’t betray your mother. Don’t cheat her with lies.

9. It seemed to me that a devastated woman’s grief-stricken sigh had the potential to burn down a house.

10. A flue note by the riverside! Ah, my shattered heart, what is the relevance of recognition now?

You can go for this novel, if you are interested in reading about-