The Spy; and the life of a spy is to know not to be known. Said by the founding father of India’s external intelligence agency, The R&AW. But, the protagonist of Paulo Coelho’s novel tried to live her life on her own terms. And that cost her life. A concisely written novel based on the true story of the infamous Mata Hari.

In this era of chaos, we can’t be sure who is a spy or who’s not. In fact, the world is full of contradictions and so are people. Each one of us wears several masks. And each mask reveals something new about that person. Although the majority of us claim innocence when our paradoxes come out in front of us. Revealing the multi-layered personality which we carry within ourselves.

The protagonist of The Spy by Paulo Coelho had the same traits mentioned above. Aside from that, she was a woman with her own set of rules and regulations.That’s her biggest crime. However, she was in a Cage like life, and always wanted to fly free. But her fate was destined for something else for her.

What is The Spy by Paulo Coelho?

The Spy by Paulo Coelho, is the story of Margaretha Zelle, famously known as the Mata Hari. The latter was convicted as a spy by the French authorities during the World War I. And in October 1917, she faced the firing squad and shot dead. 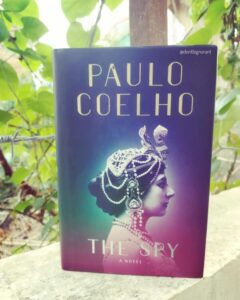 The Spy By Paulo Coelho

In fact, other than a spy she could be anything. But, a careless attitude. And my life, my rules, ensured Mata Hari’s destruction. The language of the novel is easy to read. Though the story moved in a zig-zag way. Not linear. So, maybe some readers may find the story boring. Still, within a few hundred pages, Paulo Coelho tried to tell Mata Hari’s tale in his own way of story-telling.

Margaretha Zelle was born in the nondescript town of Leeuwarden, Holland. Life treated her pretty well until she turned sixteen years old. While studying at a boarding school, she was raped by her school principal. This particular incident always remained evergreen in her memory. The wound healed but the scar remained.

She was like a bird that wanted to fly high. That’s why to leave everything behind. She married a man who was twenty-one years senior to her. He was an army man of the Royal Dutch Army. And with him, she moved to the Dutch East Indies (now Indonesia).

However, she believed that she was finally freed from her cage. But, in reality, from one cage she entered into another, which was more painful than the previous one. Her husband not only physically tormented her, but he was also a drinker and a womanizer. That made her life more painful.

Margaretha couldn’t take any of this anymore. And somehow she managed to leave everything behind and reached the city of her dreams, Paris, France. In the hope that this time she live her life on her terms.

It was in Paris that Margaretha Zelle became Mata Hari. The infamous strip-dancer of the late 19th and early 20th century. In fact, she had no shame in sharing that she had slept with some of the most powerful men of France. From wealthy bankers to senior bureaucrats. She was in bed with each one of them. And she was enjoying that attention.

But, as they say, With time, memory fades. The same is true for beauty and charm. Only personality remains. Everything else fades with time. Attention and staying in the spotlight, on the other hand, were like oxygen to Mata Hari.That’s why, before a few months of World War I, Mata Hari went to Berlin to perform there as a stripper. And it was in Berlin that her fate was sealed. She was neither a French citizen nor a German. In fact, she belonged to Holland, a netural nation at the time of the First World War. But she lived the life of a spinster. She believed that so-and-so from the power centres will always be available to her.

But, as soon as she came to Berlin in July 1914, the war sirens had already started in Europe. And because of her closeness with the elites of France, Mata Hari was hired as a spy agent by the Germans. She was given the code name, H21. And she accepted the German proposal for only 20 thousand francs at that time. But, in truth, she just needed the money and wanted to feel that she was doing something great.

In fact, she told the French counterespionage services about her meeting with the Germans. And started working as a “Double Agent.” But, in reality, she was just playing carelessly at a very dangerous time. Neither did she traded any secrets because she never had any. But she was simply caught in a web of lies that she had spun for herself.

That’s why in February 1917, she was arrested by the French authorities. And after a trial of few months in which she pleaded innocence. She was condemned to death. In October 1917, Mata Hari, the woman who once charmed the bed of the most influential men of the France, shot death by the firing squad. And at last, she was freed from this world of chaos. Though, she never thought that in that way she was going to be freed by the Almighty.

Best Quotes of The Spy Novel By Paulo Coelho

These are some of the best quotes which I come across while reading the book.

1. I have always been an optimistic woman, but time has left me bitter, alone, and sad.

2. The crimes I did commit, I escaped, the greatest of which was being an emancipated and independent woman in a world ruled by men.

3. Memories are full of caprice, where images of things we’ve experienced are still capable of suffocating us through one small detail or insignificant sound.

4. I looked only toward the sunshine and forgot the storms. I let myself be dazzled by the beauty of the roses but paid no attention to the thorns.

5. All wars come to an end. Many will profit at the expense of the dead, and, in the meantime, we will keep on traveling far away from the conflicts while the conflicts insist upon pursuing us.

6. In a war, the first casualty is human dignity.

7. Love is an act of faith and its face should always be covered in mystery. Every moment should be lived with feeling and emotion because if we try to decipher it and understand it, the magic disappears.

You can go for this book. If you want to read.
• A Paulo Coelho book
• A woman-centric novel
• A quick-to-read book

I hope you like this article. Thanks for reading. Jai Hind.