Aravind Adiga’s novel, “The White Tiger,” is a thought-provoking story about not only a village boy. But it’s also about society, the way democracy works, and the vicious system that runs in India with impunity. A must-read book.

Sometimes fiction novels tell you the real face of the nation where you live—the society, the social evils, and the people. And most importantly, it tackles the issues that, as citizens, we all know and face on a daily basis. But we try to avoid it for our own reasons, isn’t it?

The White Tiger is one of those books that contains all the things that I’ve mentioned above. In fact, it will make you think about a lot of things. Especially about India and the way it runs.

What is The White Tiger By Aravind Adiga?

The White Tiger is the story of a boy by the name of Munna, aka Balram, who was born in a nondescript village by the name of Laxmangarh in the Gaya district of Bihar. The same Gaya where Siddhartha, famously known as Gautam Buddha, received the enlightenment. 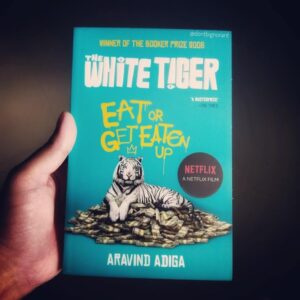 The White Tiger, Winner of the Booker Prize 2008.

But for Balram, instead of light, there was only darkness everywhere. And this virulent darkness not only made people like him as a servitor but it also killed them slowly. The story is powerful. That’s why The White Tiger won the Man Booker Prize for fiction in 2008.

The protagonist Balram shows us that to survive in the world’s largest democracy and to reach the top, you should know how to manage or manipulate the system and the people around you. And the story revolves around this. In fact, Balram admired China a lot. That’s why he narrated his story in a long letter format to the former president of the People’s Republic of China, Wen Jiabao.

The language of the book is easy to understand. I strongly recommend this book to all the readers out there.

These are the important characters in Aravind Adiga’s book, The White Tiger:

Kusum- The grandmother of Balram

These are some of my thoughts after reading the novel.

1. The protagonist, Balram, symbolizes all those Indians who are, on a daily basis, exploited to the core by their masters.

2. Making downtrodden people more vulnerable so that they can’t think other than survival is one of the heinous parts of the system that runs in India.

3. The widening gap between the rich and the poor is so vast in India that it makes a mockery of the world’s largest democracy.

4. Indian politicians are very rare breeds of humans. They start their day by invoking the name of Mahatma Gandhi, and by the evening, they had done so many things that even hard-core criminals laughed.

5. The Indian system is the perfect example of how democracy has been used to exploit and plunder the resources of the nation by a handful of people at the expense of the majority.

These are the following reasons on the basis of which you can go for this novel:

• A story that reveals the reality of the Indian system

• A novel that addresses various social evils in the society