Undocumented, but not having documents doesn’t mean that humans are going to be hound like animals. And being treated worst than slaves. Humans deserve empathy and care, especially those who are vulnerable. It doesn’t matter whether they are documented or not. In fact, sane people can’t let humanity die, because few persons are trying to kill it through their horrible acts. This book is an eye-opening and stellar work of investigative journalism. It’s a must-read book.

In the Indian Subcontinent, going abroad, especially to the Arab Gulf Countries, and working and earning there is a dream of multitudes. In fact, it’s more about the stories which people hear from their near and dear ones about the richness of the Arab world, that push them towards those Arab countries. Without realising that, all that glitters is not gold.

Though, the word ‘Globalisation’ is a recent phenomenon. But, for thousands of years, the people of Hind (India) and the Arabs have been in contact with each other. Especially, from the Indian state of Kerala, whom the Arabs call as the ‘Malabaris’. For the people of the Arab world, India is Al-Hind; and Indians are Hindi. It doesn’t matter whether you are from North India or South India. In Arab countries, Hindi means people of India.

In fact, Keralites (Those who are from Kerala) and the Arabs have been doing trade with each other for several centuries. Their relationship pre-dates the arrival of Islam on the Arabian Peninsula. Interestingly, Islam as a religion first came to India through the Malabar Coast (Kerala). The Cheraman Juma Masjid, built in 629 CE, was the first masjid in India. And it’s one of the oldest mosques in the world.

But, all of this looks good when we study history. The present reality is not better. Those workers who have migrated to the Arab Gulf in the hope of changing their lives for good, faced and still faces some of the worst things that a human could experience in his or her lifetime. So, let’s discuss the stories of those migrant workers.

Undocumented by Rejimon Kuttappan is the painful stories and struggles of the Indian migrants in the Arab Gulf, who have gone to the Arab nations to improve their lives. But, instead of betterment, they have received not only treachery; but inhumane behavior from their employers. In fact, these tales reveal about the horrible system of the modern day slavery, especially the ‘Kafala System’ that has been practiced in the Gulf Cooperation Council (GCC) countries with impunity. 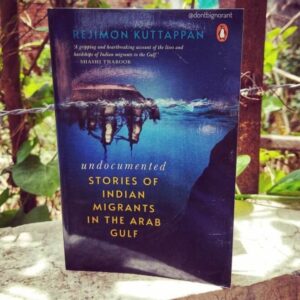 Undocumented, Painful stories of Indian migrants in the Arab world

The USP of this book is that the author himself lived in Oman for more than a decade. In fact, as a journalist he not only covered the stories of the stranded migrants. But, he also saved the lives of many Indian migrants, both men and women. That’s why in 2017, he was deported to India by the Government of Oman. Because, telling a Government that “All is not well”, is like telling a physician that instead of giving medicines for the short term, tell your patient about the root causes of the disease.

The language of the book is easy to read. I strongly recommend this book to all the readers out there, especially to aspiring students of journalism, and those who are from India, Pakistan, Bangladesh, Nepal, Sri Lanka and other Asian countries.

Other than the introduction the book has been divided into the following chapters:-

Although, we seldom hear about human slavery these days. But in the GCC (Saudi Arabia, UAE, Kuwait, Baharin, Oman and Qatar) countries, there exists a system by the name of ‘Kafala system’, that can be easily termed as the form of modern day slavery.

Any migrant worker can’t go to the Arab Gulf countries without a Kafeel (sponsor). And under the kafala system, a migrant worker’s immigration status is legally bound to an individual employer or sponsor (kafeel) throughout their contract period.

In fact, the migrant worker cannot enter the country, transfer employment, nor leave the nation without any reason, without first obtaining an explicit written permission from the kafeel. So, in a nutshell, under the kafala system, a migrant worker is like bonded labour.

In fact, all the documents and passport of the migrant worker are already under the custody of his kafeel. Because it’s the latter who visits the immigration office and renews the visa of the migrant worker. That’s why when the migrant worker fails to give their kafeel the monthly freedom fee. They not only stop their visa renewal; but because of no passport and official documents. The worker becomes undocumented and identity less. Especially those migrant workers who work as the domestic helpers. And in this case majority are uneducated women from the Asian countries.

Workers have no caste and no religion

Majeed was born as an orphan in Kerala, India. With time he also learned the skills of mechanic. Like all the other Keralites, he also heard about the stories of so-and-so gone to the Arab Gulf, earned money and came back and built their homes back in Kerala,. That’s why he also gone to Oman. Leaving his pregnant wife was not an easy decision for Majeed. But, for their future he went there.

In fact, in Oman he got a job as a mechanic. He was also earning quite decent and remitting money back home. With time he also bought the shop where he worked from his sponsor. But, things changed suddenly for him. He helped two of his employees in taking out loans from a moneylender. And those fellow migrant workers have gone to their nations and never came back.

The moneylender demanded his money back from Majeed. The latter gave him whatever he could. But, because of constant issues, Majeed ran from his shop. As all of his documents were under the custody of his kafeel. So, he can’t contact him either. And Majeed became a stranded worker in Oman. Like a beggar he roamed here and there for food.

But, luckily Majeed met the author of this book. Told him about his story. And they hatched the plan to send Majeed back to India. In this plan, Majeed crossed the mountainous border of Oman, and the UAE, and got injured. But, he was successfully reached to the UAE. In fact, he was helped by some Pakistani migrant workers. As, we all know that workers from wherever they are have no religion, no caste, and no nationality. They all suffer the same whether they are from India, Pakistan, Bangladesh, Nepal etc. That’s why during hard times they always support each other.

Though, Majeed has gone to the Arab Gulf with high hopes. But he suffered a lot there. It was his good luck that he was able to return to India safely. Though he returned with an empty-pocket.

Sushmitha Pandit, the mother of two young girls from the state of Bihar, India, thought that her family woes would be solved if she got a chance to work in the Arab Gulf. Being from a poor family, she was not aware of visas and all. She just wanted to support her family. And through an agent in India, she got the job in the UAE as a domestic helper.

But, instead of the UAE, she was sent to Oman. And for the first few days she was forced to sleep with other men in the brothel. The open and shut case of human trafficking, isn’t it? Later on, she was sold to an Arab family for domestic help. Here she was not only abused physically but also mentally. She was given leftover food to survive. With no passport and other official documents, she couldn’t do anything.

Somehow, Sushmitha contacted Mr. Rejimon Kuttappan. And the latter told her that he would help her. Not only they rescued her from that horrible place. But, they also sent her to the Indian Embassy in Muscat, Oman. From there, Sushmitha went back to India.

There are many women like Sushmitha in the GCC nations. In the name of domestic help they are suffering a lot. Some of them ran from their employers houses and saved themselves from the torture. All of this is going on with total impunity.

The agents send these women first to the UAE on a tourist visa. And from Dubai, they smuggled them to Oman and other Gulf countries. Since they come on a tourist visa, which usually expires within few months. And after that these women comes under the category of overstayers. With no passport and other official documents with them, these women are usually being exploited day and night.

Although, these stories talks about the Indian migrant workers. But, people of other nations like Pakistan, Bangladesh, Nepal, Philippines and other Asian countries are also facing the same issues in the Arab Gulf.

Every day People straighten up the hair, why not the heart?

You can go for this book if you wanna read,
• About migrants issues
• Investigative journalism
• Exploitation of workers with impunity