Cages, Kumud, And The Story Of An Indian Sex Worker

Cages, Love and Vengeance in a red-light district is not only the tale of an Indian sex worker. It’s more than that. It’s a story which didn’t shy away from calling a spade, a spade. Reality in its raw form.

Selling sex is as old as any other profession which we humans are into, isn’t it. But, those people who are associated with prostitution are not only labelled or called by demeaning names. But, the society also puts them into a category which is as worst as an animal which is being destined to a slaughter house.

Although, the tag of morality with which our society likes to associate with tends to forget that we all are naked under the shower. As, they say, Those who live in glass houses should not throw stones at others.

Especially, in a country like India, where during the Pre-modern era, we have had the concept of courtesans who not only were highly skilled in love making but they were also dancers and singers of the highest stature.

From Kings to the members of the Royal court, people of all shades used to visit them. But, as the kings and their kingdoms vanished. Also vanished with them was the respect which these women got along with the titles.

Although, that vacuum has been filled with words like whore, prostitute and in Indian language, Randi! That’s how we know about the women who are into the trade of flesh.

So, let’s see what does this story of an Indian prostitute tell us about herself and the hypocritical society which we all are part of.

What is Cages, Love and Vengeance in a red light district?

Cages, Love and Vengeance in a red light district is the story of Kumud, an Indian sex worker. Although, it’s a work of fiction, but it’s based on a real life character. 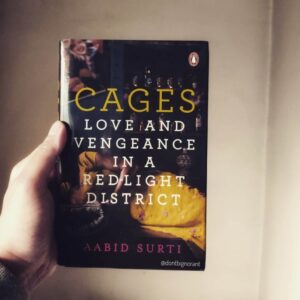 Cages by Aabid Surti, A tale of an Indian sex worker.

This book was originally written in Gujarati as Vasaksajja by Aabid Surti in the late 1970s. And I strongly recommend this book, especially to the people of India.

Kumud was born in a nondescript village of Satara, Maharashtra. Her father died before she was born. Her life revolved around her mother who also happened to be a prostitute. In fact, that’s her family tradition.

Kumud’s grandmother was one of the many concubines of the Peshwa. Although, she was a great dancer too. Kumud grew up seeing her mother. In fact, she learnt about this profession from her mom. And she had no shame in accepting that fact.

Although, Kumud didn’t enter into the world of flesh trade as long as she was in the village. But, a draught will change this too.

The draught bring not only calamities but it also changed the life of Kumud forever. Because of extreme hardship her mother sold her to a middle man for a paltry sum of ten rupees. Yeah, she was sold for only ten Indian rupees. According to that pimp no one wants to deflower a stunted girl like Kumud.

Some of you might be sympathize while thinking about the protagonist of the book. But, don’t be. And you will know why I’m saying this.

So, that pimp brought Kumud to the infamous, Kamathipura, Bombay’s sex bastion. Although, that dalal sold all the others girls which he brought with him but no one was willing to buy Kumud. So, he left her on her own in the unknown world of Kamathipura.

In the alleys of this world, Kumud started selling sex on the streets for a sum of two rupees per shot. That’s the amount which she charged when she entered into this trade.

In fact, let me quote what she said about her profession,

I am a prostitute by birth, by vocation and by religion. No man tricked me into this profession. No boyfriend dumped me here. No pimp forced me into these cages. Unlike the girls who sob every night because they were unwittingly entrapped in the flesh trade, I never shed a tear! On the contrary, I found that this ancient profession suited me. It made my soul content.

Too audacious, isn’t it. She could have chosen any profession if she wanted to. But, she knew from the starting what she wanted. A rare clarity.

Although, Kumud started with two rupees but she also observed people around her too closely. That’s why she made few rules which she won’t let anyone break.

Like she won’t sleep with more than ten men in a night. No condom, No sex. She made sure that she stayed away from venereal diseases.

In fact, she was amazed when she saw the framed photos of great men and woman like Mahatma Gandhi, Morarji Desai, Indira Feroze Gandhi on the cabins where they used to entertain their male clients.

Although, she was a whore who had slept with uncountable number of men. But, only one man entered her heart. Love can blossom anywhere.

The love that made her complete

He used to bring breakfast and tea for her. In fact, he was younger than her. That’s how Kumud met Sattar. Although, love brewed between them like tea brew slowly and steadily under the flames of fire.

Being in bed with men of all type. Kumud thought that inside she was dead. Doing an act time and again to please her audience (here clients).

But, the day she made love to Sattar, her thoughts changed. He was the one who gave her the orgasm which she never ever experienced in her life. The way he loved her was unspeakable for Kumud. A single touch of Sattar would turned her on. It was pure love for her.

Although, her love story not only ended abruptly but it also ended in a brutal way. Having a lover in the world of flesh trade is too risky.

Kumud was one of the many girls working in the cages of Kamathipura. Although, she knew her worth. But, her beloved lover was brutally killed by the henchmen of her boss whom she hated from the bottom of her heart. And she took a vow that she will destroy that man and will raze his empire forever.

The revenge of the whore

Being in the trade of flesh for long, she knew how to entice men. In fact, she said and let me quote,

Our vaginas were nothing more than cheap complaint boxes for the failures and frustrations that alcohol wasn’t able to drown.

And with her wit and charm she was able to catch the big fish in her net. Her boss. The man who was responsible for several traumas of her life.

Kumud became his mistress. He started sharing his secrets with her. Those secrets which could ruin his entire empire if they were heard by his nemesis. But, this buffoon was in love with Kumud. And the latter knew this very well.

Kumud was waiting for the right opportunity to ruin him. And it came to her when she met the author of this book. A struggling writer who was looking for a story for a Bollywood movie.

A deal was made between them. She will tell her life’s story and in return Aabid would arrange a secret meeting with the nemesis of Kumud’s boss. At the meeting the latter told about a secret deal of her boss. In return she wanted her safety and a movie production house in her name.

The nemesis who was a Pathan not only gave what she wished. But, he also shot to death the man whom Kumud hated the most. The revenge was taken by her.

Let me conclude with this bon mot –

All things that are white are not milk, and all that glitters is not gold.

Order your copy of the Cages, Love and Vengeance in a red light district from here- Cages by Aabid Surti