China : The Country Of Human Robots 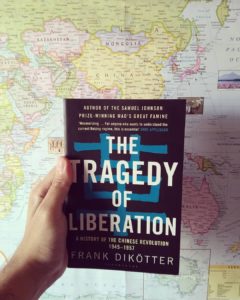 The tragedy of liberation, A history of the Chinese revolution is thoroughly researched. Although, this book is not everyone’s cup of tea.

A little bit of information about the Chinese history is required before you read this book.

In October 1949, Mao Zedong proclaimed the formation of the People’s Republic Of China in Beijing.

Mao was the leader of the communist party of China, popularly renowned as chairman Mao.

He promised freedom, equality and social justice for the inhabitants of China. And people of China who had already seen the effects of horrifying civil war readily accepted Mao’s words.

They didn’t realized that Mao Zedong was master of words, especially when it comes to the policy of ‘Divide-and-Rule’.

Under Mao’s supervision the communist’s created an one-party state in China where they sought to control everyone but answerable to nobody.

And to achieve this kind of totalitarian state, the cadres of the communist’s killed millions of people.

They had changed the thought process of ordinary Chinese people. Anything against the party was not acceptable.

Those who dared to speak were labelled as ‘counter-revolutionaries’, and they were killed mercilessly.

Mao Zedong was a loyal disciple of the Soviet leader Joseph Stalin .He copied him and the policies which the latter executed in the erstwhile Soviet Union .

That’s why Mao never hesitated to kill his own people.

The author of this book has really done a great job by exposing the reality of the communist’s of China.

Though, people like Adolf Hitler, Joseph Stalin and Benito Mussolini were considered as mass murderers but Mao Zedong was also second to none.

I will end with these lines of Gautam Buddha :-

‘Three things cannot be long hidden- The sun, the moon and the truth.’