Communist Party Of China Vs A Blind Man : An Incredible Story

Some advised me to give up my human rights work, but this I categorically refused to do; I would speak the truth, whenever I had the chance. I firmly believed- as I still do – that if you bow your head before the Communist Party, it will soon make you get on your hands and knees, and next it will stomp on your crouching body until it destroys you. 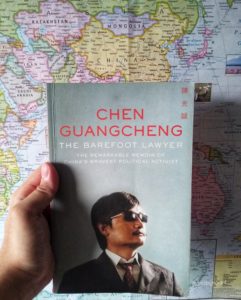 What comes to your mind when you hear, read or see the word China. Maybe some of you will think world’s most populated nation, world’s second largest economy, one of the five permanent members of the United Nations security council, manufacturing power house of the world and many more things.

But, as they ‘All that glitters is not gold’. The same goes for China. For the outside world everything is going fine inside the middle kingdom (China). But the reality is very different. Total control of human mind and body is what china is capable of, and they are doing it with impunity.

As, economic interests superceded basic human rights that’s why the Communist Party. in china is become a force to reckon with.

But there are some brave people in China who are not only raising their voices against the injustices of the communist regime against the humanity but they are also making sure that their work will not go in vain.

And the author of this courageous memoir is one of them. Chen Guangcheng was born in the countryside of China. His parents were poor farmers who supported him through thick and thin.

When he was three years old he lost his vision. But that doesn’t made him feel inferior. This brave man not only completed his schooling and graduation, but he also worked for the betterment of his village folks. That’s why from early on he became a thorn in the eyes of communist party of china.

They jailed him on fabricated charges. Forced him to live in a House arrest. And they not only mentally tortured him but they also harrassed his whole family.

But, this brave soul outsmarted his captors when he escaped from his home during house arrest, and note he’s not a sighted human. Still, he defeated all the odds and fought back.

After escaping from his home he somehow managed to reach to the most safest place in China,The embassy of the United States. And at the embassy too he showed his courage and perseverance. At last he along with his family flew away to the USA, for a normal and humane life.

This memoir not only shows that no one can defeat human will power, but it also exposed the ground reality of China and the communist party.

I definitely recommend this book to all the readers out there.

I will end with these lines of Author-

‘ If a society is to change, people must unite and demand their rights; justice will never be achieved if people wait for change to come from above.’