Dara Shikoh : The Emperor Who Never Was

The Emperor Who Never Was, Dara Shikoh in Mughal India is a meticulously researched and narratively written Biography of the Mughal Prince, Dara Shikoh. 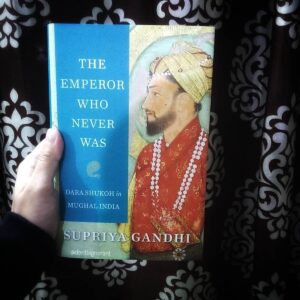 Although, it’s a book about the life and times of Dara Shikoh but it also tells us lots of things about the Mughals, especially the role of the Mughal women in administration and other important chores.

One important point before we discuss about Dara that this book is not everyone’s cup of tea. If you are aware about the Mughal history only then go for this biography.

Who was Dara Shikoh?

Dara Shikoh was brutally beheaded on the order of his youngest brother and the sixth Mughal emperor, Aurangzeb, The Alamgir.

So, some of you might be thinking that why Aurangzeb killed his own brother. In fact, he not only killed Dara but he also killed his other brother, Murad Baksh and nephew, Suliaman Shikoh to succeed the Mughal throne.

In fact, the history which we read or heard when it comes to Aurangzeb and Dara Shukoh is written from a very different point of view.

In India, Aurangazeb is presented as an evil man who killed the Philosopher-Prince, Dara Shikoh.

In Pakistan and even in Bangladesh, Dara Shikoh is considered as an apostate who had strained from the path of Islam and that’s why Aurangzeb killed him.

Mughals did not practice the concept of Primogeniture. And it’s one of the main reasons that made Aurangzeb killed Dara Shikoh and other family members.

I’m sure you’ve seldomly heard the concept of Primogeniture. Basically, it means the eldest child (here son) has an exclusive right of inheritance.

And to succeed the throne one has to wipe out the other contenders for the throne and Aurangzeb did the same.

In fact, in the Battle of Succession, Dara also did the same only to be caught and killed by his younger brother.

Because as they say,

Dara and his family :-

Dara Shikoh was the eldest son of Shahjahan and Mumtaz Mahal. He had three brothers and three sisters.

Dara Shikoh married to Nadira Bano. And they had two sons by the Suliaman Shikoh and Sipihr Shikoh.

Dara, Shahjahan and Jahanara were very close to each other. They always travelled together and Shahjahan preferred Dara over his other sons.

Unlike his other sons who were given the governorship of the various provinces of the Mughal Empire, Shahjahan made sure that Dara always remain close to him.

Although, Aurangzeb cunningly outmaneuvered his brothers to capture the throne. But, historians always speculate what if Dara Shukoh won the Battle of Succession and become the Emperor of Hindustan.

To answer this question we need to understand the complex and multilayered personalities of both Dara and Aurangzeb.

Dara Shikoh, was not only a disciple of the Sufi Saint, Miyan Mir of Lahore and Mullah Shah but he also studied the Indic thought.

Dara made a comparative study of Hindu and Islamic religious concepts and had the Upanishads, a collection of sacred Hindu texts translated into Persian.

In fact, Dara was the first Mughal royal who had translated the Upanishads into Persian.

Dara regularly used to interact and communicate with the like-minded Sufis and Hindu ascetics.

He had also written several books like, Sakinat-ul-auliya, Safinat-ul-auliya and most importantly, Majma-ul-bahrain, meaning the ”Meeting place of the two seas”.

He was a quintessential philosopher Prince who died and buried in an unknown place.

Unlike his elder brother, Aurangzeb was administratively and military more skilled. He was the governor of the Southern Mughal Province of Deccan where he shoned his skills and planned that how to capture the Mughal throne.

After the sudden illness of Shah Jahan, Aurangzeb realised that he can’t fight on multiple fronts that’s why he forged an alliance with his brother Murad Baksh.

Aurangzeb promised Murad that they will divide the Mughal Empire in between them.

Although, Murad and Aurangzeb fought together against the Mughal imperial army in the Battle of Dharmat and Samugarh and won decisively. But, Aurangzeb made Murad Baksh his prisoner and sent him to the infamous Gwalior fort where he and later Sulaiman Shikoh were executed.

In a nutshell, if Dara Shukoh was the North Pole then Aurangzeb can be considered as the South Pole.

One more important point which we need to understand that the women in the Mughal harem also played an important role in Administration and during and after the Battle of Succession, especially, Jahanara.

Jahanara was the eldest daughter of Shah Jahan and Arjumand Bano.

Jahanara, means, The “Ornament of the world”.

She and Dara had lots of similarities between them. Both of them love reading books and both had sufi inclinations.

Jahanara not only patronize art but she also wrote few books related to Sufis.

During the battle of succession she also tried to forge a compromise between the brothers but to no avail.

In fact, she spent the last years of her life by taking care of his ailing father, The fifth Mughal emperor, Shah Jahan, who was imprisoned in the Agra fort by his son, Aurangazeb, The Alamgir.

In Indian subcontinent, especially in India, Pakistan and Bangladesh, The Mughals and the history related to them are conveyed to the multitude in a skewed form.

For Indians, Mughal emperors like Akbar and to a some extent, Dara Shukoh epitomizes the Hindu-Muslim unity, unlike Aurangazeb who is considered as an evil son and an intolerant Emperor who not only demolished uncountable Hindu and Jain temples but also imposed Jaziya on the Hindus.

In Pakistan, Invaders like Mahmud of Gazni, Muhammad Ghori, Babur, Aurangzeb are not only glorified but they also named their weapons on the name of these historical figures.

In fact, jingoistic people on both sides of the border try to belittle each other by using the name of these historical personalities without even realising the context in which those people used to live.

Do you think that invaders used to differentiate between Hindus and Muslims. Their only motive was to plunder as much as they could, and during the medieval time they did it with impunity.

We need to understand that the policy of ‘Divide-and-Rule’ is not only mastered by the British when they enslaved India but ironically after the Indian independence the same policy is mastered by those people who are ruling over the masses.

Instead of fighting on non-issues we need to understand the concept of ‘Unity in Diversity’. This is the USP of Hindustan.

Because, as Mahatma Gandhi once said,

”An eye for an eye will only makes the whole world blind.”

Dara Shikoh, Aurangzeb and many more like them were people of their times. And at that time there was no concept of democracy and human rights as such. And that should be the yardstick when we judge them or any historical personalities like them.

I’ll end with these words,

“Sovereignty brooks no bonds between fathers and sons, an emperor has no relative.”