Days In The Life Of A Sufi, 101 Enchanting Stories Of Wisdom

Days in the Life of a Sufi, 101 enchanting stories of wisdom, tells us some interesting and surreal tales related to the life and times of some of the revered Sufi saints of the Indian Subcontinent. A readable book.

In fact, Look at the case of the arrival of Islam in Hindustan. The earliest Muslims came to the land of Hind in the 7th CE not as a sword carrying foot soldiers of Islam. But, as traders in the Malabar coast of India. However, the invasion of Hindustan was done with the help of the sword by Muslim rulers in the 11th century. But, they were not able to win the hearts of the multitudes of Hindustan. And that hearts were won by Sufism and the mystic Sufi saints.

So, let’s see what days in the life of a Sufi tell us about them.

What is Days in the Life of a Sufi Saint by Raziuddin Aquil?

Days in the Life of a Sufi Saint, is a concise book which is full of anecdotes about some of the renowned Sufi mystics of the land of Hindustan. 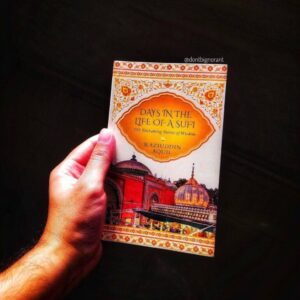 Days in the life of a Sufi, Stories of wisdom

The USP of this book is its easy to read language. And the precise manner in which the author presented the stories related to the lives of Sufi Saints.

Sufism, is a mystical movement within Islam. And the saints who associated themselves with this branch of Islam, came to be known as the Sufi Saints. Sufism originated in the 8th and 9th CE in Iraq. And love is the foundation of Sufism.

In fact, unparalleled love for God and service to humanity are the essential features of the Sufi mystic movement. There are several Silsilas, or orders, of the Sufism. And each Sufi mystic is associated with a particular Silsila.

Sufism came to the land of Hindustan in the late 12th and early 13th Century. Of the many Sufi orders, four Silsila gained prominence in India.

In the Indian context, These are the following four important Sufi orders,

Although, the Sufi orders mentioned above. The Sufi saints of the Chisti Silsila revered the most not only in India but throughout the Indian subcontinent.

The Chishti silsila was founded by, Khwaja Gharib Nawaz Muinuddin Chisti. He’s also known as the patron Saint of Hindustan. His mazar (Shrine) is in Ajmer, Rajasthan, India. His reverence is such that not only Muslims but also Hindus, Sikhs, and people of different religious beliefs throng his dargah in uncountable numbers every year. Especially, during his Urs ( death anniversary of a Sufi saint ).

In Sufism, the death of a Sufi mystic is celebrated. Because, a Sufi considers himself or herself as a lover of God. And when he left his body, it’s believed that he would unite with God, his lover.

In fact, look at the spiritual successors of Muinuddin Chishti, and their influence.

The influence of Sufism and especially of the Chisti mystic, Baba Farid was such that The First Sikh Guru, Guru Nanak was also influenced by his thoughts. That’s why the holy book of the Sikhs, Guru Granth Saheb also contains couplets of Baba Farid.

Once a disciple of Baba Farid gifted him a knife. However, Baba Farid accepted it. But, he also advised his disciple that one should give a needle instead of a knife. Because, a needle is used to stitch unlike a knife which is used to cut.

And Sufism and the Sufi saints believed in uniting people together through love. And by opening their doors for people of all religions, Sufi saints worked as a needle to unite the society.

These are the following features which I observed while reading this,

* A brief introduction about Sufism in India

* Can finished within a day or so

Let me conclude with these lines of Hazrat Nizamuddin Auliya, The patron saint of Delhi,

If anyone puts thorns on my way out of animosity, Every flower in the garden of his life remain thornless!