Didi, The untold Mamata Banerjee is a concise political biography of the first woman chief minister of the state of West Bengal, India. 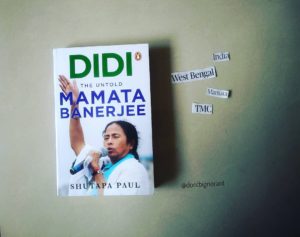 Mamata Banerjee is a true politician. It was not that she did everything casually or as per her whims and fancies. On most occasions, she was carried off by emotions. But even behind her emotional outburst, she had a cool, calculated and well worked-out strategy. All her actions are backed by very strong reasons.

That’s an accomplishment in itself, especially in the context of the male dominated Indian politics.

So, here some of the important questions arises.

Who is Mamata Banerjee Aka Didi?

Mamata Banerjee is the incumbent Chief Minister of the state of West Bengal, India. In fact, at present she is the only female CM of a state in India.

Being an Indian she also shows her Bengali identity whenever the situation demands. That’s why The Bengalis supported her through thick and thin.

Mamata banerjee was born and brought up in Kolkata, West Bengal. Her father was an Indian National Congress (INC) supporter and that’s why she also joined the INC.

The first time Mamata Banerjee came into the limelight when she defeated the CPI (M) heavyweight Somnath Chatterjee in the 1984 lok sabha elections from the Jadavpur constituency.

As a loyal member of her political party Mamata tried everything to bring her party back in power in the state of West Bengal. But due to the strong hold of the CPI (M) and the lack of discipline in her own party she didn’t prove that successful.

That’s why she started her own Political outfit in 1998 by the name of Trinamool Congress (TMC).

And it was the TMC under the leadership of Mamata Banerjee which uprooted the 37-years-long-rule (1977-2011) of the left-wing government from the state of West Bengal.

There are lots of reasons because of which Mamata Banerjee became the first woman chief minister of the state of West Bengal, India. And one of the them was the bad governance of the Left-wing government.

Although, Mamata Didi is trying very hard to portray herself as a Prime Ministerial candidate. But in the end only time and circumstances will tell that her ambition of becoming the PM of India will get materialize or not.

The author of this book has highlighted both the positive and negative sides of Didi, and within few hundred pages she unravelled the untold Didi.