Divided By Partition United By Resilience: 21 Inspirational Stories From 1947

Divided by Partition United by Resilience, 21 inspirational stories from 1947, epitomizes the phrase that says, No force on earth can stop an idea whose time has come.

The word Partition doesn’t invoke any good feelings, isn’t it. Even today it hurts when people hear about the division of a family, business or even a nation. Imagine, the pain of those multitudes who not even lost their family members but also their homes and livelihoods in the madness of the year 1947.

Some of you might be thinking what’s special about the year 1947. So, in 1947 not only India gained its Independence from the British but it was also partitioned. And by dividing India, a new nation by the name of Pakistan was born.

Although, it’s an irony that those who attacked were ordinary people and those who died were also common people. People of means reached safely towards their destinations.

In fact, the partition of India in 1947 saw the largest migration of humans in recorded history. Albeit, people of India can read about the history of partition and the pain and suffering it caused to multitude. But, now they can also relate it with another tragedy with majority of us (here Indians) experienced with our own eyes. I’m talking about the horrific second wave of the Covid-19 Pandemic. It’s the only one parallel which today’s generation can relate with those hapless people who ran from pillar to post just to save the lives of their loved ones in August 1947.

Although, this book is not about those who died about it’s about those brave souls who lost their everything in partition but still they rebuild their lives from scratch and reached to the top position (s) of their respective fields.

So, let’s see what divided by partition United by resilience tells us about these people.

What is Divided by Partition United by resilience?

Divided by partition United by resilience is the tales of those 21 Indians who have had experienced the mayhem of India’s Partition but still they overcame their sorrows and became a living epitome of success and greatness. 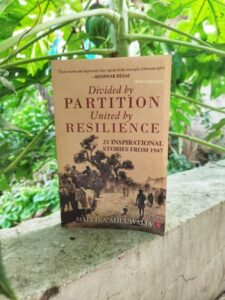 From a former Prime Minister of India to one the greatest poet’s of the Indian subcontinent, the stories of these people are awe inspiring.

Although, this book contains the stories of only 21 people but there are (were) uncountable number of people also who’ve rebuilt their lives after the partition and did great for the society. So, we can’t forget them also.

Stories mentioned in divided by partition –

The book contains the stories of these 21 people,

Although, we will discuss about five people here.

Dr Manmohan Singh, was the former Prime Minister of India (2004-14). In fact, Dr Singh was the only prime minister after Jawaharlal Nehru who has completed two full consecutive terms as the PM of India.

Dr Manmohan Singh’s grandfather was murdered in the communal violence of 1947. He came to India along with his family to start anew. And he worked extremely hard to reach to the top position (s) in independent India.

Not only Manmohan Singh became India’s first Sikh Prime Minister but he also served in different fields to serve his country.

In fact, in the year 1991, when the then Prime Minister, P. V. Narasimha Rao opened the Indian economy for the rest of the world, even at that time he selected Dr Manmohan Singh as his finance minister.

Even after experiencing the horror of 1947, Manmohan Singh didn’t lose hope and that’s why he commands authority and respect not only in India but throughout the world.

Although, several survivors of the partition visited Pakistan to see their old homes but Dr Manmohan Singh never visited his village Gah.

He said and I quote here –

I did not go there because of the memory of my grandfather and the others who were killed for no reason. All the houses were burnt anyway, so there was nothing to go back for.

Although, he experienced the worst of communalism but this man never let this scar of partition to let him promote anything which incite violence and hatred amongst the different communities of India. A feat in itself.

Indians love spices. In fact, the Indian food is incomplete without the flavours of different spices. And majority of the Indians are familiar with the brand of MDH Masala (Spices).

But do you know about the man who was behind the idea of MDH masala and its story.

The Full form of MDH masala is ‘ Mahashian di Hatti ‘. The man who built this company from scratch was Dharampal Gulati.

Dharampal Gulati was born in 1923 in Sialkot (Now In Pakistan). His family used to own a masala shop in Sialkot by the name of Mahashian di hatti. But, during the partition they also left their everything in Pakistan and came back to India.

In fact, Dharampal Gulati was not even a graduate. He was a fifth class dropout. But, still he created an empire worth crores of Indian rupees.

When he came to India as a refugee he did odd jobs to survive. He also worked as a horse cart driver to help his extended family. But, nothing worked for him. Since, his family were dealing in spices when they were living in Sialkot. So, Dharampal Gulati decided to start what he knew the best. And that’s it. Bingo.

Slowly and steadily they built their company. In fact, for a partition survivor and that too a refugee who was not even a graduate building an company from scratch is commendable.

In fact, Dharampal Gulati said in his autobiography –

We ourselves are responsible for our victory or defeat, so rather than blaming fate, we should focus on cultivating our strengths and reducing our weaknesses so that this God given mind and body can be put to full use, so that we know that all our talents and energies are doing some good in the world.

People like Dharampal Gulati is the best example for entrepreneurs. It is all about taking the risks and believing the idea which you carry in your heart, mind and soul.

The poet whose words speaks for the masses-

Gulzar, The name speaks for itself. In India, he is fondly called as Gulzar Saheb. Although, he wasn’t born with this name. Gulzar is his pen name.

Sampooran Singh Kalra is the real name of Gulzar Saheb. He was born in a Sikh family. At the time of partition he was in Delhi. He saw the killings with his own eyes. But, through his poems and songs he made sure that his words speaks for the multitude.

That’s why he wrote these wonderful lines –

( Life seems to be little bit sad, let’s leave this is not the first time.)

Kuldip Nayar was not only a fearless journalist of his time but he was also an author of some wonderful books including the most readable biography of Bhagat Singh, Without Fear, The Life and Trial Of Bhagat Singh.

Kuldip Nayar was born in Sialkot ( Now in Pakistan ). He also left his home along with his family and came to India. In fact, during that journey he escaped death and humiliation both because a mob mistook him as a Muslim. Although, he was saved but that memory sticked in his mind forever.

During his research work for one of his books he visited the man who drew a line on a map which defines the border between India and Pakistan. That man was Cyril Radcliffe. In fact, the official border of India and Pakistan is known as the Radcliffe line.

Radcliffe told very interesting fact to Kuldip, Initially the city of Lahore was to come to India. But, then Radcliffe realised that Pakistan had no big city. Even in the East, he had given Calcutta to India, and Dhaka was not ready at that time, so he gave Lahore to Pakistan.

So, People like Kuldip Nayar never let the curiosity inside them to die. In fact, through his works he made sure that even after his death he will enlighten the society. And he achieved that with utmost respect.

Milkha Singh, one of the greatest athletes that India has ever produced. Although, young Milkha Singh saw his entire family killed in front of him. They were killed in the madness of partition.

But, this great man didn’t loose hope. He fought back against the circumstances. And not only he won several gold medals for India but he became an epitome of hard work for the aspiring Indian athletes.

Although, Milkha Singh said very clearly and loudly, That Milk Singh became Milkha Singh not in a day or over a fortnight but it took several decades of hard work that he reached to the top. So, in life there is no shortcut. You’ve to work day and night for your dreams only then you will be able to achieve greatness.

The message of hope –

Out of these 21 people none of them said anything against any community. In fact, these people saw and experienced the worst of partition but still they moved on and did great in their careers.

These people not only cherish hope but they also believe in a society where people live like humans.

In fact, we Indians need to understand that uncountable number of people gave their lives for the freedom of this country. We as a nation can’t remain ungrateful towards those who gave their everything just for the sake of posterity.

It’s our responsibility that rather than creating chaos in the society in the name of this and that, we should learn from those people who’ve had experienced the horrors of partition and still they didn’t lose their hope and did great for the society.

Let’s build this ancient land which is known as India or Bharat, together.

I’ll end with these lines of the former president of India, Dr APJ Abdul kalam

And thoughts result in action.