Love and Revolution, Faiz Ahmed Faiz is the authorized biography of the legendary Urdu Poet, Faiz.

The main USP of this book is that within few hundred pages the author (Grandson of Faiz) has unravelled the life and times of Faiz Saheb. 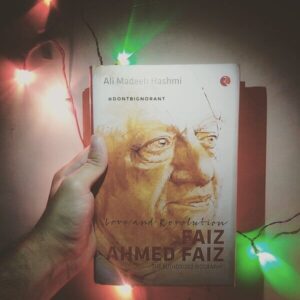 If you are from Indian subcontinent then you might be aware about Faiz Ahmed Faiz. If not then I’ll try to write about him in a layman’s words.

Before I start this piece on Faiz Saheb. I wanna tell you that poet and poetry is like body and soul, you can’t separate one from the other.

Although, poet may die but his or her poetry will remain forever like soul which is eternal and omnipresent.

Who was Faiz Ahmed Faiz?

Faiz Ahmed Faiz was the doyen of Urdu Poetry and the foremost journalist of his time.

He was born in undivided India and took his last breath in Lahore, Pakistan.

The ancestors of Faiz Saheb were Kshatriya Rajputs which later on converted to Islam.

His father was a renowned personality of his time. In fact, he worked for the then Emir of Afghanistan, Abdur Rahman Khan.

Faiz grew up in the city of Sialkot where he completed his early education and later for his higher studies he went to the majestic city of Lahore.

Faiz had an easy life during his childhood because of his father who had made a good fortune during his lifetime.

Faiz was an avid reader since his school days and later on his reading became more diverse during his sojourn in the Government College of Lahore where he completed his BA in Arabic and then MA in English.

The city of Amritsar played an important role in the life of Faiz Ahmed Faiz.

After completing his graduation Faiz Saheb was looking for a job like every other graduate.

But, it was the time of The Great depression which had started with the wall street crash in America in 1929.

Soaring unemployment and high inflation was the norm of that time.

But, luckily Faiz Saheb got the job as a lecturer in 1935 for the Mohammadan Anglo Oriental (MAO) college in Amritsar.

It was in Amritsar where Faiz Ahmed Faiz was introduced to the romanticism of the communist ideology, he became involved in the All India Progressive Writers Association.

And most importantly it was in the city of pool of nectar where Faiz Saheb met and fallen in love with an English woman, Alys, who became his wife and his ardent supporter.

Although, during the World War Second, Faiz Saheb quit his job as a lecturer and he joined the British India army and after the end of the war he was decorated with the member of the British empire (MBE) award in 1946, in recognition of his meritorious services.

Partition of India and Subh-e azadi (The Dawn of independence) –

Being a people’s poet, Faiz Ahmed Faiz composed one his best poems during that time when people were killing each other in the name of religion.

The title of his poem is, Subh-e azadi, The Dawn of independence. It was written in August 1947.

And very diligently he expressed not only his sentiments but also the emotions of the multitudes through his words.

That we were waiting for, this is not that morning.

This is not that morning, in whose yearning,

We had set out full of hope that we will surely find,

In the wilderness of the sky, the final destination of stars,

Somewhere the night-weary waves must find their shore,

Some place must be the final halt for the boat of our heart’s sorrows.

Full of youth’s passion driven secrets, on the majestic way,

When we set out, many hands tugged at us.

From the adobes of beauties and their impatient dreamlands,

But extremely dear to us was the desire to see the morning.

Very close to us was its beautiful drape of light.

Lofty was our yearning, subdued was our fatigue.

Have heard that the light has already vanquished the darkness.

Have heard that our steps have already met their destination.

Much changed are the customs of people’s suffering –

Joy of union is acceptable but the anguish for separation is banished.

The soul’s fire, the eye’s longing, and the heart’s burning –

On none of them, there is any relief from this remedy of separation.

From where the beloved breeze came, and where did it go?

The lamp by the roadside is still burning unaware.

Yet the oppression of the darkness has not been alleviated,

The moment of salvation for our sights and hearts has not yet arrived.

Keep marching, for that destination has not yet arrived.

Life in Pakistan and The Rawalpindi Conspiracy Case :-

After the creation of Pakistan in August 1947, Faiz Saheb got a job as the editor-in-chief of the Pakistan Times and Imroze.

And being a true journalist he not only highlighted the issues of the people of Pakistan but at the same time he wrote constructive criticism of the policies of the Government of Pakistan.

At that time journalism was a not a business. It was like a voice of the common man which eroded with time.

And tyrants and megalomaniacs never prefer an independent press. That’s why the then rulers of Pakistan decided to frame Faiz Saheb on flimsy charges which became famous as the ‘Rawalpindi Conspiracy Case’.

According to the government, The purpose of this conspiracy was to sow uncertainty and discord within the armed forces and spread chaos in the country.

And in the infamous ‘Rawalpindi Conspiracy Case’, Faiz Ahmed Faiz served four years in several different prisons under the threat of a death sentence for treason.

In fact, the main motive of the government behind this so-called conspiracy was to muzzle the dissenting voices within the country and to ban the Communist Party Of Pakistan (CPP).

Although, Faiz Ahmed Faiz was influenced by the socialist ideas but he was never a member of any communist party.

And, I’m amazed the way Faiz Saheb was being treated by the authorities of Pakistan.

When he was in Jail unnecessary stuff was said about him and his family. He was called as a Russian agent and his wife was labelled as the British spy.

But as they say,

‘No force on Earth can stop an idea whose time has come.’

Even after being incarcerated for several years, Faiz Ahmed Faiz was loved and still revered throughout the world.

He travelled extensively throughout his lifetime. In fact, for few years he also lived in Beirut with his wife, Alys.

Faiz and his poems were quite famous in the USSR. That’s why he was given the Lenin Peace Prize in 1962. He was a national hero in the USSR.

Faiz Saheb also worked in official or unofficial capacity to promote the art and culture for the Government of Zulfikar Ali Bhutto, The first democratically elected Prime Minister of Pakistan and the father of Benazir Bhutto.

Back to the roots :-

Although, Faiz Saheb was an ardent traveller of his time. But, as T.S. Eliot said,

We shall not cease from exploration, and the end of all our exploring will be to arrive where we started and know the place for the first time.

Because of Faiz’s unhealthy life style and the habit of chain smoking had a toll on his body.

And the revolutionary Urdu Poet enjoyed his last breath in Lahore and he died peacefully there in November 1984.

With his death an era came to an end. But, his words are alive to inspire people who are unafraid to speak against the tyrants, oppression and injustice.

This is Faiz Ahmed Faiz for you. The man who lived his life and left a treasure trove of words for the multitude.

One thing which I also wanna mention about Faiz Saheb is the importance of his wife, Alys Faiz.

This courageous woman not only accepted a different culture and country. But, during the incarnation of Faiz, she single handedly raised her two daughters.

Faiz Saheb also realised the sacrifices his wife had made for him and his family. That’s why he not only had a high level of respect for her but he also considered her as his close friend.

The secret recipe of a healthy and a sustainable relationship.

The importance of Faiz’s words in the 21st century :-

A poet or a great person is the product of the circumstances of his time.

The same we can say about Faiz Saheb. His poetry is about resistance. Resistance against the oppression, dictatorship and injustice.

Speak, your lips are free

Speak, your tongue is still your own

Your gaunt body is yours

Speak, your life is still your own.

Look, in the blacksmith’s forge,

The furious flames, the red-hot iron

Speak, this brief time is enough

Before the death of body and tongue

Speak, say what you must!

It’s an irony that people of the Indian subcontinent take freedom for granted.

Instead of asking about employment opportunities, making the government of the day accountable, majority of us are busy in belittling each other, isn’t it.

Be it India, Pakistan, Bangladesh or any other country in the neighborhood. Demagogues flames our passion in the name of religion and spread hatred.

It’s the ordinary people who always suffers instead of those who ignite the fire.

So, don’t divert yourself from the main issues and speak without any fear against the tyrants and megalomaniacs.

Don’t let the narrow minded people to rule this beautiful world of ours. Stand up and fight against the injustice.

I’ll conclude with these words of Mahatma Gandhi,