Feroze the forgotten Gandhi, is a meticulously researched biography of a forgotten freedom fighter whom people in India remember for his surname only rather than what he did during his life and times. It’s a necessary book for those people who are eager to know about the engima, i.e., Feroze Gandhi The Forgotten Freedom Fighter.

Feroze, the forgotten Gandhi is the story of a parsi boy, who was born in Bombay, but grew up with her aunt (according to rumours she was her real mother) in Allahabad. 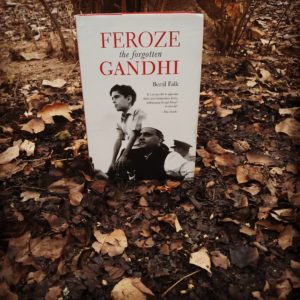 Later,he joined the ‘Indian Freedom Movement’ to free India from the yoke of British Colonialism. He was jailed by the then British India government many times. In fact during the Indian freedom movement, he came in contact with Kamala Nehru (wife of India’s first prime minister, Jawaharlal Nehru ), and he remained loyal to her at last.

When Kamala nehru died because of tuberculosis in Europe, Feroze was present there. When Feroze was in Europe he proposed Indira Gandhi (daughter of Jawahar lal Nehru and Kamala nehru ) for marriage, Indira said yes to Feroze, and they came back to India.

When the news reached to the people of India that the daughter of Jawahar lal, marrying a Parsi ( or a non-hindu ), many people in India started opposing the marriage. But the couple already received the blessings of Mahatma Gandhi. And later the marriage ceremony took place at ‘Anand Bhavan’ (Residence of Jawahar lal Nehru ).

But after few years of marriage the relationship between the two started deteriorating. Indira moved on with their children to her father’s house, and Feroze stayed at his Allahabad house.

And one of the many reasons for the separation is that Feroze was considered as a womanizer. After Independence, Feroze was elected as the member of Parliament from the Rai bareli constituency.

In Parliament, he was known as the unofficial leader of the opposition. In fact, he was the first one who called Indira gandhi a ‘Fascist ‘, at the breakfast table, because Indira had forced her father to remove the world’s first elected communist government in Kerala.

Later, Feroze Jehangir Gandhi died because of heart attack. The man who was a true democrat, freedom fighter, and a brilliant parliamentarian had been forgotten, first by his own family, and later by the People of Hindustan.

After India became independent, Nehru became its first Prime Minister, Indira also became the first lady of the house. Although, Feroze was a renowned Freedom Fighter, a good parliamentarian and a loyal Congress Party worker.

But he’s still remembered as the son-in-law of Jawahar lal and the husband of Indira Gandhi. I guess the reason for this is that his own family disowned him, and it all started when Indira moved with her children to live with his father.

Rarely someone from the ‘Nehru- Feroze Gandhi’ family mentioned about Feroze Gandhi. Is this all because of the ‘vote bank politics’? Is the members of the Nehru-Gandhi family don’t want to talk about him, because Feroze was a Parsi?

Currently very few books are available on Feroze gandhi, and kudos to the writer for writing a book on a man who is more than the son-in-law or husband of someone. He dedicated his life to free India from the British colonialism. He was a true democrat, unlike his wife who used the plank of secularism and socialism to fool the people of this great land, for the sake of power.

The writer almost took 40 years to write this book. He talked and interviewed several people who are close friends of Feroze Gandhi and also his colleague’s. He also included various photographs of Feroze which makes the book more pleasurable to read. The language of the book is very easy to read. I will recommend to readers that you can go surely for this book.