Gandhi and Bhagat Singh, the two great ingenious humans that represents the North Pole and the South Pole of the Indian freedom movement. Although, these two schools of thought are ideologically opposite. But, their end was always the same i.e. An Independent India. And for this both of them gave up their lives.

During the struggle for the freedom of India, many freedom fighters left their inedible mark in the annals of Indian history. But, two names remain evergreen to date i.e. Mahatma Gandhi and Bhagat Singh.

In fact, the admirers of these two sons of mother India are in multitudes, yet, you’ll find or experience a division between them. Either someone is a Gandhi lover, or a Bhagat Singh fan. Because, the admirers of the latter believes that the former was responsible for his death. And the followers of Mahatma counter them that he did everything to save him.

These two trends shows the black and white interpretation of the history and historical events. But, it’s the ‘Grey Area’ which gives us a clearer picture. And in this article we’ll discuss about it.

What is Gandhi and Bhagat Singh by V. N. Datta?

Gandhi and Bhagat Singh by V. N. Datta is a concisely written book that tells us whether or not Mahatma Gandhi tried to save the life of Bhagat Singh and his comrades. 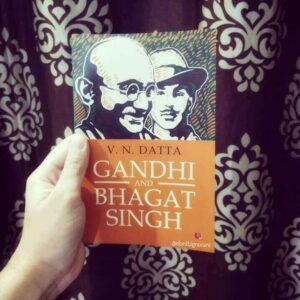 Although, it gave a good clarity about those times. But, for those people who haven’t read a single page about the life and times of Gandhiji and Bhagat Singh, this book may left them with more questions than answers. That’s why I recommend this book only to those readers who have read about these two freedom fighters of Hindustan.

Gandhi and his ideology –

What’s the ideology of Mahatma Gandhi? This is the question that requires an explanation, isn’t it. To understand this we need to read what Gandhiji himself said about his ideology.

In his book, Hind Swaraj, he clearly defined his views and the methods through which he wanted to attain freedom for his beloved nation, India. In fact, He clearly said that Satyagraha, or Passive Resistance, was his way through which he believed that India will gain her rightful freedom. And non-violence and Self Suffering are the part and parcel of his ideology.

In fact, for Gandhiji, non violence was the creed of his life. And throughout his life he remained sticked to this through thick and thin. And this put him in an exact opposite camp to those who believed in the Cult of Violence, Like Bhagat Singh and other revolutionaries like him, as a way for India’s freedom.

And because of this dogmatic view of Gandhiji towards Non-violence, the fans of Bhagat Singh believes that he didn’t try to save Singh’s life from the gallows.

Bhagat Singh and his thoughts –

To understand, Bhagat Singh, we need to understand the influences which he had on him while growing up. First of all, he was from a family of Indian freedom fighters. His father, Sardar Kishan Singh, and his Uncle, Sardar Ajit Singh, were freedom fighters. In fact, his uncle was himself a revolutionary who even spent time in jails of colonial India with Lala Lajpat Rai.

Secondly, being a Punjabi from the United Punjab, India, Bhagat Singh saw the mayhem which General Dyer did at the Jallianwala Bagh in April 1919. At the time of Jallianwala Bagh Massacre he was twelve years old.

Other than this the influence of the Ghadr Party, his own understanding of the Indian freedom movement and most importantly his disappointment with the Gandhian school of thought, made him realise that, Revolution was the only way through which Hindustan can be freed from the clutches of British imperialism.

That’s why he joined the revolutionary movement. Especially, the Hindustan Socialist Republican Association (HSRA). And even founded the Naujawan Bharat Sabha. And he showed his valour with his comrades in 1928 when in a broad day light in the streets of Lahore, he and Rajguru shot to death a senior British police officer, John Poyantz Saunders, or J. P. Saunders.

It was not only Saunders that they killed but its the direct attack on the British imperialism. By silencing him, Bhagat Singh and his comrades directly challenged the British Empire.

In fact, within a few months of this incident, in 1929, Bhagat Singh and Batukeshwar Dutt threw two bombs and leaflets in the Central Assembly at Delhi. Although, the bombs were of low intensity. Because, it’s the message which they wanted to convey. And neither of them tried to escape and showed any resistance when the police came to arrest them.

Bhagat Singh was convicted in two cases, The Central assembly bomb case and the Second Lahore conspiracy case. And in the latter case the British Tribunal gave him and his comrades the capital punishment.

One thing which we need to understand that the day Bhagat Singh joined the revolutionary movement of India. He signed his own death contract. He knew that sooner or later he will die. But, he made sure that he will die on his terms.

Mahatma Gandhi and his attitude towards the execution of Bhagat Singh-

On March 23, 1931, in the Central Jail of Lahore at sharp 7:30 pm, Bhagat Singh, Rajguru and Sukhdev were hanged to death. Even at that time people blamed Gandhiji for his death. The argument which people quote even today, that, Mahatma Gandhi could have made the commutation of Bhagat Singh’s death sentence a precondition for signing the Gandhi-Irwin Pact, or The Delhi pact of 1931. But, he didn’t.

The Gandhi-Irwin pact was a historical event in itself. For the first time in the history of the British Empire in India, an Indian was directly negotiating on equal terms with the Viceroy of British India, The representative of the British Crown in India.

The talks between the then Viceroy, Lord Irwin and Mahatma Gandhi started in Delhi in February 1931, and it ended on 5 March 1931. The pact was signed between these two people.

These are the important points of the Gandhi-Irwin pact –

1. The Indian National Congress would call off the Civil Disobedience movement (CDM) and participate in the next Round Table Conference to draw up a future Federal Constitution for Self-governing India with safeguards.

2. Release all the prisoners not charged with violence during the CDM.

4. Restitution of confiscated property and the reinstatement of government servants.

5. Salt manufacture to be permitted on the coast and to remit taxes not already paid.

Although, Commutation of Bhagat Singh and his comrades death sentence was not associated in the pact. But, Mahatma Gandhi did requested Viceroy Irwin for a reprieve in Bhagat Singh’s case on humanitarian grounds.

As, we have discussed earlier that throughout his life, Gandhiji abhorred violence. He was against the Capital punishment. In fact, point two of the Gandhi-Irwin agreement said those prisoners who are not charged with violence would be released. But, Bhagat Singh had assassinated a British official.

Even Viceroy Irwin knew that he can’t commute Singh’s death sentence. Because, the British bureaucrats in India were eyeing for his blood. He killed one of their own.

But, till the last moment, Mahatma Gandhi tried to save Bhagat Singh’s life. Even on 23rd March he dispatched an emergency letter to Lord Irwin asking for mercy for Singh and his comrades. But all in vain.

One most important point which we all need to understand is this, Bhagat Singh’s father also tried to save his life by filing a petition. When Bhagat Singh came to know about this he was aghast. From Jail he wrote a letter to his father in which he not only censured him for saving his life. But, he also said that this hurted him the most.

For Bhagat Singh, his life was not important but freedom of India was. In the altar of India’s freedom struggle he sacrificed himself so that the posterity will enjoy the freedom of free air which they didn’t.

In fact, Bhagat Singh, Rajguru and Sukhdev never wrote any mercy petitions to the British. For them that would be tantamount to treachery towards their ideals. They lived like brave men throughout their lives and they died like one.

Let me conclude with these lines,

Real revolutionary don’t beg in front of his or her opponent. In fact, they roar like a Tiger, whether in Prison or outside.