Gandhi Before India by Ramchandra Guha

Gandhi before India, is a book which everyone in Hindustan, irrespective of his/her caste, creed, religion and ethnicity should read, or i would say eat, chew and digest. 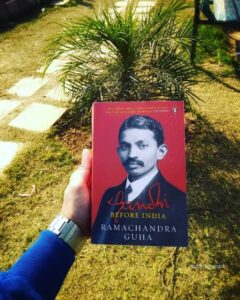 Gandhi before India by Ramchandra Guha.

Mohandas Karamchand Gandhi aka Mahatma Gandhi, was a man who was way ahead of his time. He gave the world a beautiful tool by the name of ‘Satyagraha’, or the truth force.

But, here the question arises who was M K Gandhi? And how he became Mahatma Gandhi? Who were his friends and mentors? And why he is still revered throughout the world?

To know about M K Gandhi in detail you can also read an article of mine by clicking here – Mahatma Gandhi The Apostle Of Non-violence.

His father was the diwan, or the chief minister of Porbandar.

When mohandas was only five years old, his father shifted to Rajkot along with his family, where he worked as the advisor to the ruler of Rajkot.

Gandhiji completed his schooling in Rajkot. Although, he was an average kind of student. His mother was very religious woman but not dogmatic.

During his school time a Muslim boy by the name of Sheikh Mehtab became his closest friend.

Mohandas Gandhi was married when he was a teenager to a girl by the name of Kasturba. After completing his schooling mohandas sailed to London to study law there.

But before leaving for London, mohandas promised his mother that he will not drink alcohol, won’t eat meat and no sex with the strangers.

After reaching London, he registered himself at the Inner temple, one of the four Inns of court in London.

When he was in London he joined the ‘Vegetarian society’, and discussed the topic of vegetarianism with his European friends.

And after spending two years in London, he returned to his motherland as M K Gandhi, barrister-in-law.

But one day he received a proposal from a merchant by the name of Dada Abdullah to settle his commercial dispute with his cousin in South Africa.

And it was in South Africa that Mohandas Karamchand Gandhi became Mahatma Gandhi.

In fact, when Gandhiji was studying law in London, he never faced any kind of racial discrimination. But the condition in South Africa was totally opposite.

And in these two decades in Africa, he developed the tool of passive resistance which he named as ‘Satyagraha’, or the Truth force.

He established his ashrams there, fought against the discriminatory racial laws, organized the Indian diaspora of Africa, and taught them the importance of unity.

And some of the people whom Gandhiji considered them as his mentors were – Dada bhai nauroji, Gopal Krishna Gokhale, Raychandbhai, leo Tolstoy and Ruskin bond.

And People throughout the world revered him because he fought his battle by using non-violence as his creed.

He preached only those things which he himself practiced. He had total control over his mind and body. He was Cosmopolitan in nature and for him humanity comes first.

Gandhi before India by Ramchandra Guha is one of the few good books which I recommend to anyone who is interested in reading about the life and times of Gandhiji.

I will end with these lines of Nelson Mandela-

‘You gave us a lawyer; we gave you back a mahatma’.