99 Thoughts on Ganesha, Stories, Symbols and Rituals of India’s beloved elephant-headed deity tells us about some known and some unknown facts about God Ganesha without whom any ritual wouldn’t start in Hinduism.

In Sanatan Dharam, or Hinduism, there are 330 million Gods and Goddesses, unlike other major religions of the world like Christianity, Islam, and Judaism, where there is a concept of One God and One Holy book.

Out of those 33 Crore Gods and Goddesses, each of them represent an idea. Be it the Trinity of Hinduism,

Mahesha, or Shiva ( The Destroyer)

But, there is an one particular deity without his blessings you can’t initiate any kind of ritual in a Hindu household. In fact, Hindus invokes his name whenever and wherever they start something auspicious. He is none other than, Lord Ganapati. 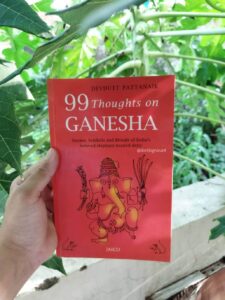 So, let’s discuss about the God who removes obstacles and bring joy and happiness in one’s life.

Ganesha is the son of Lord Shiva and Godess Parvati ( Shakti).

He is also known as Ganapati, leader of the Ganas. In fact, his mother gave him the name of Vinayaka. Because, the way he was born is quite interesting.

The Birth of Vinayaka –

Godess Shakti wanted a child but Lord Shiva didn’t want to be a father. So, Mother Parvati made a paste of turmeric and oil, and she applied that paste on her body. When the paste was dried she removed it and from that she created a baby and named it Vinayaka.

In fact, the name Vinayaka means, a child created without the help of a man. Vina (without) and nayaka (A Man).

Ganapati, The God Who Removes Obstacles

That’s how Ganesha was born. He is an organic God. Even today on the occasion of Ganesha Chaturthi, Hindus bring statutes made of clay and after one, three, five, seven or ten days they submerged it either in a river or inside their home.

In fact, how Vinayaka became Ganesha is as fascinating as his birth story.

From Vinayaka To Ganesha –

As, Mother Parvati created Vinayaka. So, she told her son that don’t let anyone inside her cave. As, neither God Shiva was aware about his son nor Vinayaka knew anything about his father.

So, God Shiva tried to enter the cave of Goddess Shakti. But, Vinayaka didn’t let him in. That infuriated Shiva. Out of anger, he threw his Trident towards Vinayaka and chopped his head off.

When Parvati came out of her cave, she saw the lifeless body of her son. She told Shiva that she will destroy the entire world if he don’t give her son back to her.

So, Lord Shiva told his followers to go towards the North direction and bring back the head of the first moving creature they encounter.

So, Shiva’s followers saw an elephant and brought his head to Shiva. The latter put that head on the lifeless body of Vinayaka and resurrected him. And Shiva also gave him the name of Ganesha, or Ganapati, leader of the Ganas.

The metaphor behind the elephant head –

In fact, some of you might be thinking that why they used the head of an elephant, isn’t it. So, the answer to this query can’t be explained in black and white terms, to understand the metaphor behind using the elephant head lies in the grey area which can be interpreted in ‘n’ number of ways.

Hinduism is all about interpretation. Each symbol here represents something. Be it the worshipping of nature, or animals. You will find creatures of all shades available in the abode of Sanatan dharam (or eternal religion).

As we all know that elephant is the most powerful animal present in the jungle. In fact, he is a beast. Nor he has any natural rivals. He also represents abundance and prosperity. Because, you won’t find an elephant at a place where food and water are in scarcity.

So, by giving Vinayaka the head of an elephant. Shiva and Shakti, created a symbol which represents uncountable number of things. Like, we all know that inside a human body there is a beast which resides within us. And the head of an elephant represents that beast and the human body symbolises the power that can overcome that beast and bring the best out of himself or herself, isn’t it.

Similarly, the elephant head also represents the material reality. And the human body represents spiritual reality. And Lord Ganapati, is the combination of both. It tells us that in one’s life a balance is a prerequisite for success.

From nowhere to everywhere –

Ganapati was not the primary deity during the ancient India. But, with time he gained
prominence and slowly and steadily his reach extended not only in India but also to countries like Nepal, Tibet, Cambodia, Indonesia and even Japan.

In fact, during the 18th and 19th century, Ganesha became the primary deity of the Peshwas (Maratha Rulers of India). And this legacy was turned into a social event of cultural gathering by one of the fierce freedom fighters of India, Bal Gangadhar Tilak.

It was Tilak who capitalised the festival of Ganesha Chaturthi which was till then not a pan Indian festival. He used this festival to spread the message of Swaraj ( Self Rule) amongst the people of Colonial India.

So, in some ways Gajanan also gave his blessings to free India from the clutches of British colonialism.

I’ll conclude with this bon mot of the The First Sikh Guru, Guru Nanak ji – –

Even Kings and emperors with heaps of wealth and vast dominion cannot compare with an ant filled with the love of God.

Order your copy from here- 99 thoughts on Ganesha