There is but One God. His name is Truth; He is the Creator. He fears none; he is without hate. He never dies; He is beyond the cycle of births and death. He is self-illuminated. He is realized by the kindness of the True Guru. He was True in the beginning; He was True when the ages commenced and has ever been True. He is also True now. 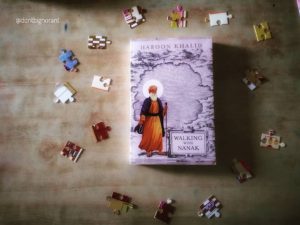 Guru Nanak, The founder of Sikhism.

Walking with Nanak, is beautifully written and a well researched religious Travelogue by a man who belongs to a country where people wears religion on their sleeves.

The country here is Pakistan, where ‘Guru Nanak’ spent most of his Life.

In this book the author visited those religious places or shrines in Pakistan, which is connected to Baba Nanak.

The most important thing about this particular author is that being a Pakistani and a muslim, he is researching and writing not about Islam but about the religions and traditions of Minorities of Pakistan. And he deserves credit for this.

So, here the question arises.

Who was Guru Nanak?

Guru Nanak was considered as the founder of Sikhism.

Although, Guru Nanak was born as a Hindu in the bedi family. His father was an accountant in the Lodhi administration.

From a very young age Nanak showed his inclinations towards the spirituality and asceticism.

One day nanak decided to leave his friends and family to find the Truth and to discover himself.

The man who accompanied Nanak in his spiritual journey was a Muslim by the name of Mardana, who used to play Rabab ( A musical instrument).

Both Nanak and Mardana travelled in all the four directions of the world.

They travelled in the north to countries like Tibet, nepal & Kashmir, in the west to Mecca and Baghdad, in the south up to the Sri Lanka, and in the east up to the Bay of Bengal.

And in this spiritual journey of his, Guru Nanak composed poetries, challenged the notions of caste, creed and unnecessary rituals and traditions.

According to Guru Nanak, God resides in the hearts of the People, not in the temples, mosques and churches, where the priestly class exploits the innocent people in the name of religion.

Connection of Baba Nanak with Pakistan :-

The connection of Guru Nanak with Pakistan. is that he was born in Talwandi aka Nankana Sahib, and he spent the last years of his life in Kartarpur Sahib, and both these places are in Pakistan.

The author also told us several stories about the life of Guru Nanak. And stories of other Sikh Gurus too.

The language of the book is very easy to be read. And I strongly recommend to readers to read this book, and enlighten yourself with the message of Guru Nanak Devji.