Mohandas Karamchand Gandhi’s Hind Swaraj tells us about the views or the methods of a man through which he wanted to attain freedom for his country, India. A thought-provoking work.

There are many  Books Written On Mahatma Gandhi. It includes several readable biographies of him. But, hind swaraj is one of those books which can’t be ignored while knowing about the man who went on to become one of the greatest personalities of the twentieth century.

In fact, this piece of work by him will supplement our understanding of him. Although, the views which Gandhiji espoused may seem to be anachronistic. However, the same ideas set him apart from the crowd.

So, let’s see what M K Gandhi shared with us in his book.

What is Hind Swaraj by M K Gandhi?

Hind Swaraj, or Indian home rule is a booklet first published in the columns of Indian opinion of South Africa. In this pamphlet kinda book, M K Gandhi introduced the readers to the concept of passive resistance and the real meaning of Swaraj. 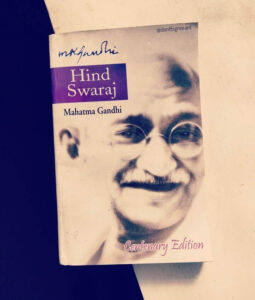 Originally, Hind Swaraj was written in Gujarati language. It was written in 1908 by Mahatma Gandhi during his return voyage from London to South Africa. In fact, hind swaraj is Gandhi’s answer to the Indian School of violence and its prototype in South Africa.

The book is written in a conversation type format, or we can say in questions and answers type. And Hind Swaraj is divided into twenty chapters. These are the following chapters-

In fact, according to Mahatma Gandhi’s own admission this book can be termed as his way of criticising the modern civilization whom he compared with the Satan.

The reader asked M K Gandhi what is Swaraj. Although, he could have said simply that swaraj means, Self rule. But, he didn’t. In fact, he shared his meaning of the real Swaraj.

According to Gandhiji, real swaraj means self control over mind. And real home rule is possible only where passive resistance is the guiding force of the people.

He also explained the meaning of Passive Resistance. According to him, Passive resistance is a method of securing rights through self suffering, it’s the reverse of resistance by arms. And he and his followers followed that through thick and thin. Even today, true Gandhian followers practices the same.

India of my dreams –

In this book, Gandhiji not only criticized the modern civilization. But, he also said that railways, lawyers, doctors, machinery and English language did more harm than good to India and its millions of people. In fact, he clearly said that if India wanna become Englistan then he didn’t want to associate with it.

He lauded the Indian civilization and its virtues and he expressed the desire that people should follow the traditions of their ancestors rather than copying the English people and its habits.

In a nutshell, he extolled the virtues of the Indian villages and its simplicity. Because according to him, India lives in its villages. In fact, an all inclusive, nonviolent, free from hatred, self-reliant, religious and God fearing India is what Mahatma Gandhi dreamt and lived for throughout his lifetime.

Let me conclude with these lines,

One who is free from hatred requires no sword.