The Girl With Seven Names, A North Korean Defector’s Story by Hyeonseo Lee tells us the harsh reality of the North Korea and especially the dark truth of the  Kim-dynasty which is ruling over there with an iron fist.

So, what comes to your mind when you hear, read or see the word, North Korea. 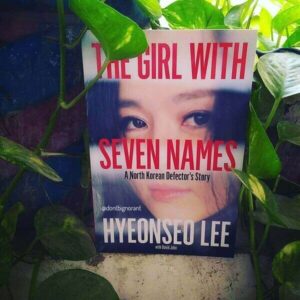 Let’s assume that you might think that it’s a country in East Asia or one of the few remaining communist countries left in the world or might be something else.

Although, some of you may have heard the term, ‘Axis of evil’. It’s one of the famous epithets given to few countries by the former president of the United States of America, George W Bush.

And North Korea deserved to be there. Now, we will come to the protagonist of this book, Hyeonseo Lee.

Who is Hyeonseo Lee?

Hyeonseo Lee is a North Korean defector and currently the citizen of South Korea. She is one of those luckiest people who somehow managed to escape from the brutal regime of the Kim dynasty in North Korea.

In fact, Hyeonseo Lee is not her real name. It’s the name she gave it to herself.

Hyeonseo Lee was born and brought up in Hyesan, on the banks of Yalu river, the ancient river boundary between China and North Korea.

She is from a well-to-do family who has a high ‘Songbun’, especially in the context of North Korea.

Being from a financially stable and a high ‘Songbun’ means a lot in North Korea.

We’ll come to the Songbun and its importance later.

Her father was in the armed forces who was tortured by the regime and later he died, and mother a clever woman who knew how to manage People in a country like North Korea.

As a child, Hyeonseo didn’t face any hardships because of her father and mother. Food was available, safety was there. It’s like a treasure trove in a totalitarian nation like North Korea.

Like every other child she also attended the school. But, wait, we are not talking about some normal country, where children will learn about the world and all. This is North Korea, a country which can be considered as a separate planet.

Indoctrination begins from the elementary school itself in North Korea. Worshipping of the Kim dynasty is what they learn throughout their life.

The so called Great leader Kim Il- Sung and the Dear Leader, Kim Jong il is like God to the people of North Korea.

You can stop breathing but you can’t say a word about the Kim dynasty otherwise you will be jailed or will be send to the gulag for all your life.

In fact, it’s mandatory from elementary school to attend Public execution. Hyeonseo Lee saw her first public execution when she was only seven years old.

This is the system which they have devised to control North Korea. They instill fear inside their hearts and minds of the Kim dynasty. That’s why they have controlled North Korea and its people for almost seven decades.

Now, we will talk about the ‘Songbun’ system of North Korea and its importance.

Songbun is a caste system that operates in North Korea. A family is classified as loyal, wavering or hostile, depending on what the father’s family was doing at the time just before, during and after the founding of the state in 1948.

Descended of workers and peasants who have fought on the right side of the Korean war are classified as loyal.

Those people whose forefathers were landlords or officials during the Japanese colonial period (1910-45) and those who’ve fled to South Korea during the Korean war (1950-53) are classified as hostile.

People of high ‘Songbun’ can study in Government Colleges and can reach to the top.

But, People of low Songbun will remain at the bottom of hierarchy forever their lives.

Hyeonseo was a curious and stubborn child. And this curiosity of her led into something which she never thought or planned.

One day, Hyeonseo decided to clandestinely visits her relatives in China. As she was from a border town and her mother was into contraband items with her Chinese dealers. So, she thought why not.

So, after having the dinner she left her home. At that time she was only a teenager. Although, she managed to cross the border safely and reached China to her relatives.

While she was enjoying herself in China. One day, out of the blue she received a call from her mother who told her that something wrong happened there and she can’t come back.

And this adventure of few days changed the course of her life forever.

Days passed into months and months into years. She was living with her uncle and aunt. But, they arranged a marriage for her. And she ran away not only from their home but she also thought that she was not ready yet for marriage.

A Girl With No Identity :-

After leaving the home of her uncle and aunt. Hyeonseo Lee changed her name again. In fact, the girl with seven names means the seven names which she used in different circumstances.

She started working in a new city of China as a waitress. And she worked hard. In fact, she was caught by the police while living there illegally but somehow she managed to convince them that she was a korean-Chinese not a North Korean.

Although, she missed her mother and younger brother a lot. But, she knew that going to North Korea is impossible for her now.

After living and working in China for several years, Hyeonseo Lee learnt about South Korea and how she can go there and asked for asylum.

One important thing, South Korea considers the people of North Korea as their citizens. And whoever managed to reach Seoul will be given citizenship and some monetary help for their better future.

So, Hyeonseo not only managed to reach Seoul. But, she did it very smartly. Majority of the North Koreans who fled from their country reach South Korea either through land route through smugglers or some other ways.

But, Hyeonseo reached Seoul by using an aeroplane. She boarded the plane by using her Chinese passport and landed on Seoul and declared herself that she was a North Korean.

When the South Korean authorities became sure that she was a North Korean indeed. They granted her citizenship and a residence in Seoul.

When she was in Seoul, she decided to bring her family to South Korea. But, it was not an easy feat.

But, somehow she convinced her mother to cross the border and reach China like she did.

Hyeonseo’s younger brother accompanied their mother to the border because he decided to live in North Korea and marry his girlfriend.

But, life is unpredictable. Hyeonseo met her mother and younger brother near the Chinese border. The trio were together after so-long. An emotional family reunion for them.

Because of some issues Hyeonseo’s brother realised that he can’t go back otherwise he would be in danger or worst killed mercilessly. So, with a heavy heart he also decided to reach Seoul illegally.

Although, her family had to face some serious troubles while reaching to Seoul. They were jailed by the authorities of Laos (A landlocked nation in Southeast Asia) when they were trying to reach the South Korean embassy there.

But, this courageous woman managed to make sure that they reach safely to Seoul. And after several months of separation they were finally together again as a family.

Hyeonseo’s story is surreal. Although, she is lucky that she made it alive and shared with us about the reality of the Kim dynasty. But, many like her never made it because either they were caught or killed mercilessly by the brutal regime of North Korea.

‘If the North Korean People acquired an awareness of their rights, of individual freedom and democracy, The game would be up for the regime in Pyongyang.’