Illiberal India: Gauri Lankesh and the Age of Unreason

When Modi mania becomes a popular mantra, when fascist fury becomes part of daily discourse, when distorted news becomes the mantra of mainstream media, when religious fundamentalism blinds people, I get disgruntled, disenchanted, disturbed, but somewhere, deep inside me hope lives. 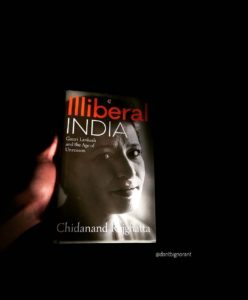 Illiberal India, Gauri Lankesh and the age of unreason is an okay kind of book which tells us in bits and pieces about the woman who was shot dead in September 2017 because of her relentless activism against injustice and bigots.

Words are more powerful than bullets and nukes. History has proved this fact time and again that whenever people tried to raised their voices against corruption, fundamentalism and other Social issues, either they were silenced, or they were assassinated.

Gauri Lankesh, the left – activist journo was shot dead in 2017 by some fanatics.

She was not the only one who was killed in cold blood. Before her people like Narendra Dabholkar, Govind Pasare and MM Kalburgi were also assassinated because of their fight against the social evils which is slowly and steadily spreading throughout India.

Gauri was born and raised in the ‘Southern Indian’ state of Karnataka. Her father P. Lankesh was a well known Journalist and a writer too. She was influenced by her father. Though her transformation was gradual.

She belongs to the influential ‘Lingayat’ community of Karnataka.

The founder of the Lingayat sect was a 12th century reformer Basavanna. He preached against the superstition, Caste, idol worship and other rituals. Gauri was also influenced by the egalitarian teachings of the Basavanna.

For Basavanna ‘Work is Worship’. That’s what Gauri followed in her life through thick and thin.

Though Gauri Lankesh fought for the rights of women, Dalits and Minorities, but she always remained a “thorn in the eyes” of those who always considered her as a part of the ‘Fifth-Columnist’.

Bharat Ratna, Atal Bihari Vajpayee once said that the answer to an article or book is another article and book. But the sad truth is that miniscule people subscribe to these noble views these days.

‘Religion is the last refugee of a scoundrel’.