Interpreter of maladies, and it’s an irony that often we ignore not only the interpreter but also the maladies, that are important part and parcel of our chaotic lives. Ordinary Bengali men, women, and their stories.

Short stories can often explain a lot about the lives of ordinary people. Especially, of those who have left their native countries. And settled far away in a foreign nation for a better future. Still, they carry a part of their culture and tradition which always keeps them tied to their motherland.

In fact, the division which we often see in our society; be it religious or class, is often blurred when the same people meet and greet each other in a far away land. And at that time they became a part of the whole. We can call it ironic. But, that’s the reality.

So, let’s see what the interpreter of maladies tells us about such ordinary people and their tales.

What is Interpreter of Maladies by Jhumpa Lahiri?

Interpreter of Maladies by Jhumpa Lahiri is a collection of nine short tales about the lives of The Bengalis who left India and settled in the United States of America. 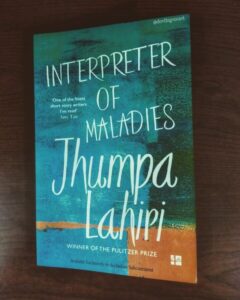 Out of the nine stories mentioned in this book; the seven tales talk about the Bengalis immigrants and their lives, and the two stories cover the lives of ordinary Bengali women.

In fact, the stories in this book cover different aspects of human behavior. Be it infidelity, nostalgia, indifference towards one’s own family, and most importantly, the sense of unity in diversity.

However, this book has won several prizes including the Pulitzer Prize for fiction for the year 2000, but according to my reading of the book. The stories are fine but not outstanding. A one time read.

These are the following nine stories of the interpreter of maladies-

1. A temporary matter
2. When Mr. Pirzada came to dine
3. Interpreter of maladies
4. A real durwan
5. Sexy
6. Mrs. Sen’s
7. This blessed house
8. The treatment of Bibi Haldar
9. The third and final continent

And out of the nine tales mentioned above, we will talk about the one which I found more fascinating than the others.

When Mr. Pirzada came to dine-

When Mr. Pirzada came to the United States in early 1971, he was a citizen of Pakistan, precisely from East Pakistan. The father of seven beautiful daughters and a lovely wife, whom he left behind. In the USA, he came across a Bengali Hindu family. And that Bengali thread connected them together.

In fact, Mr. Pirzada came for his dinner regularly at this Bengali Hindu family. And here they used to listen carefully to the disturbing news about the situation in East Pakistan (now Bangladesh). The civil war ensued between the two wings of Pakistan, i.e. West Pakistan, and East Pakistan. And Mr. Pirzada was worried about his family.

In fact, in United States, Mr. Pirzada found the necessary solace which his fellow Bengalis immigrants from India, gave him. Other than the food which they share together. And when he returned to his homeland, which had became a new nation by then, i.e. Bangladesh. Mr. Pirzada not only found his family members safe and sound, but he also wrote a letter of gratitude to that Bengali Hindu family who supported him through thick and thin.

In a nutshell, the story of Mr. Pirzada reminds us that religion can’t be the only factor which unites people. In fact, it’s the language, culture and traditions which connect people more than the respective religion(s) which they follow.

You can also check out my book page on Instagram – dontbignorant