Beyond the last blue mountain, A life of J. R. D. Tata is a readable biography of the former Chairman of Tata Sons and the only Indian industrialist till date who was bestowed with the prestigious, Bharat Ratna award. 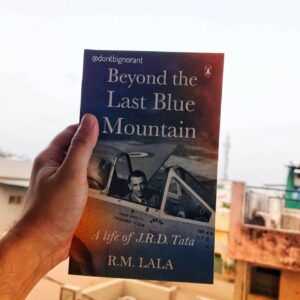 The word profit is still looks down in India, isn’t it. Especially, when we look back at the history of India then we realise that why such kind of attitude prevails.

British ruled India for almost 150 years. They came to India in the early seventeenth century as traders. These same set of people not only exploited India and its resources but they also enslaved the country with an iron fist.

Although, India gained its independence from British on 15 August 1947. But, in reality it was political freedom which we’ve had gained.

And a nation as big and diverse like India can’t prosper only on the basis of political freedom. For prosperity, economic independence is as important as any other factor, isn’t it.

And when it comes to economic independence, how can we ignore the name of the Tatas.

Although, Other than the Tatas there are few other business families also who gave their contribution in making sure that India was able to stand on her feet, economically.

But, the focus of this article is the great Tatas and the man who gave India her wings to fly as high as she wants, he’s none other than, J. R. D. Tata.

So, let’s explore the man.

Jehangir Ratanji Dadabhai Tata was not only the former chairman of Tata Sons but he was also the first man in India to get the flying license with A Grade.

In fact, J. R. D. Tata was also the founding father of India’s first airline, The Tata Airline Services which later became the infamous, Air India with its cute mascot, The Maharajah. 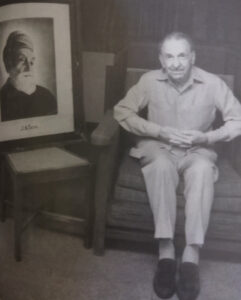 J. R. D. Tata was also the one of the eight signatories to the Bombay Plan for India.

Born in a family of wealthy businessmen from the Parsi Community the life of young Jehangir was pretty good.

Although, he couldn’t finish his graduation but he had studied in several countries like France, India, Japan and even England.

In fact, J. R. D. always regretted that he was not able to complete his graduation but he made sure that he would be second to none.

Good books and personal experience remained his guide as long as he lived.The curiosity of knowing and inquiring about a particular subject remained with him throughout his long life.

When J. R. D. was born at that time the British were ruling over India. In fact, his mother was french and until 1929 he himself was a French citizen.

At that time dual citizenship was allowed. But, in 1929 he gave up his French citizenship and retained his British India citizenship. He also served in the French army.

The House of Tatas-

Tatas are from the Parsi ( Zoroastrian) community of India. Although, the Parsis are the minority community in India but their contributions for this country is far bigger than their numbers.

Parsis were originally from the Province of Pars in Persia (Now Iran). But, their forefathers came to India and settled in the western part of India, particularly Gujarat.

The man who lay the foundation for the Tatas and for the modern India was the great Jamsetji Nusserwanjee Tata or J N Tata.

After doing well in the textile industry, J N Tata decided to execute the plan which he had for India.

So, in 1887 he established Tata & Sons along with his partners, Dorab Tata, Ratan Tata and R. D. Tata.

Dorab and Ratan were the sons of J N Tata and R. D Tata was his cousin.

In the early twentieth century, Jamsetji Nusserwanjee Tata realised the importance of heavy industries. That’s why he decided to start a steel industry in India on his own.

Although, at present it looks like a normal task. But try to imagine the conditions of the early 20th century when India was not only a British colony but it was a dumping ground for the finished British goods.

But as they say, No force on earth can stop an idea whose time has come.

The Tata Steel (TISCO) opened in 1911. And the standards which the Tatas set for their employees can be gauged from the fact that for their workers they have established an 8 hour working day.

Even in this 21st century we often see the exploitation of the employees by their employers. But, J N Tata and his successors made sure that humans should be treated with respect and dignity. That’s what made them unique.

That’s why in 1938 when J. R. D. Tata was appointed as the Chairman of the largest industrial conglomerate of industries of India. He had to make sure that he will follow the set of rules which was started by the great Jamsetji Tata.

One of the main rules which the Tatas are following through thick and thin is that they are working for the nation.

That’s why people in India says that the Tatas belongs to the country. A feat in itself, especially for a business family.

Being a brilliant aviator of his time, J. R. D. Tata saw the immense potential of the airline services in India.

That’s why in 1932, He gave India its first domestic airline services, The Tata Airlines which eventually became Air India.

He worked day and night to make sure that his dream came true. But, after the Indian independence things started to change, especially for the industry.

Jawaharlal Nehru hated the word profit and he always viewed big businessmen with skepticism. That’s why in 1953, Air India was nationalised.

The man who gave India its first Airline services knew that it was a blunder which will make the Air India redundant sooner than later.

Although, Air India was nationalised but the then Indian government knew that they need the guidance of J. R. D. Tata. That’s why they offered him the post of Chairman of Air India.

And not only Jehangir Ratanji Dadabhai Tata accepted the post of Chairmanship of Air India but he remained as the Chairman until 1978 till he was removed from the post by the then Prime Minister, Morarji Desai.

As long as J. R. D. Tata remained associated with Air India, the standards of that Airline services remained good. But, the downfall of Air India started soon after he was removed from the scene.

From 1953 to 1978, he worked for twenty five years for the government without taking any salary. And besides that he was also looking after his companies as the Chairman of the prestigious Tata Sons.

One point which proved that how the lethal combination of politicians and bureaucrats withhold India to achieve its full potential can be gauged from this story.

In the mid 1950s India was way ahead of China in civil aviation industry. In fact, when the Chinese premier, Chou En Lai came to India for the first time in 1954, he took a chartered flight of Air India because at that time China did not have the requisite long distance aircraft to carry their Prime Minister and his party.

Now, look at the difference between India and China. The latter is way ahead of the former in almost in every field.

Excessive bureaucratic control and interference of politicians in industry not only stopped India from achieving its huge potential but it also denied multitude of Indians a good life which they deserved (s).

J. R. D. Tata was a strong supporter for the cause of the family planning in India. He realised way earlier than anybody else that India needs to focus on its rising population otherwise there will be chaos everywhere.

Jobs are limited, Resources are limited. Especially, in a country like India. The only way to solve the issues is to manage things properly.

But, the politicians and bureaucrats are from other planet. They can’t see any of these things. And when someone try to change the things for good they withhold them from doing anything affirmative.

But, J. R. D. Tata knew that he can’t change the dogmatic ideology of Indian politicians but he can do in his private capacity something good from which Indians can gain.

That’s why he not only hired great minds. But, he also trusted them and their decisions through thick and thin.

He founded along with Homi Jehangir Bhabha, the cradle of the India’s nuclear programme, The Tata Institute Of Fundamental Research (TIFR) in 1945.

The Tatas knew the importance of science. That’s why they gave their contribution in whatever way they can.

India’s first cancer hospital, The Tata memorial hospital, Indian Institute of Science (IISc) and many more institutions like these were started by the Tatas.

The creed of excessive socialism which was started by Jawaharlal Nehru became infamous by the name of license-quota raj, when his daughter, Indira Feroze Gandhi became the Prime Minister of India.

It took forty four years for the government of India to realise that how lethal that License-Quota-Permit Raj was for India.

That’s why in 1991, the then Prime Minister, P. V. Narasimha Rao not only dismantled the so-called license Raj but in 1992 he also bestowed India’s highest civilian award, The Bharat Ratna (Jewel of India) to the great, J. R. D. Tata.

After living a healthy life for almost nine decades, at the age of 89, the former chairman of Tata Sons breathed his last on 29 November 1993 in Switzerland.

He’s buried in Paris along with his family. The man is no more but his deeds are everywhere to be seen.

I’ll end with these lines-

‘No System will make any difference, it’s character that counts.’