Harish Dhillon’s book, “Janamsakhis: Ageless Stories, Timeless Values,” is an enlightening book about the stories that tell us the core philosophy of the founder of the Sikh religion, Guru Nanak. It’s a beautifully written book about Nanak. A must-read one.

The book contains twenty tales about the life and times of Baba Nanak. And each story not only teaches the moral aspects but at the same time reveals the great personality of Guru Nanak and his thoughts. The language of the book is very easy to read. I strongly recommend this book to all the readers out there.

Janamsakhis are the tales that tell people about the deeds and creeds of Guru Nanak. It’s a combination of two words, i.e., Janam, which means birth, and Sakhis, which literally means the stories. 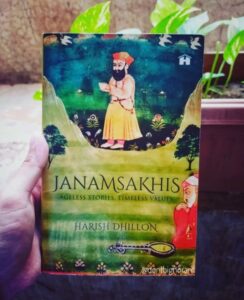 Janamsakhis, The stories of Guru Nanak.

These are some of the salient points which also deserve your attention as a reader.

1. Since his childhood, Baba Nanak challenged the conventional norms of society, whether it’s the questioning of the rituals or the caste system.

2. Guru Nanak was one of the greatest travelers of his time. He had traveled to the four corners of the world with his companion and friend, Mardana.

3. Through logical reasoning, Nanak, with utmost humility, changed the views of the people.

4. Sharing and caring are some of the important traits that Baba Nanak emphasized that humans should try to develop within themselves.

5. Universal brotherhood, love, and acceptance of others is what Guru Nanak preached through thick and thin.

6. Every religion has some good and some not-so-good elements. And Nanak took the good things not only from the Hindu sages but also from the  Sufi saints.

7. Seva, or selfless service, Kirtan, or religious singing, and Langar, or free kitchen. These three traditions, which were started by Guru Nanak in the 15th century, are still being followed by his followers.

These are some of the Quotes by Baba Nanak which I came across while reading the book.

• A man’s worth is never measured by his caste, social status, or wealth in God’s eyes. It is measured only by the nature of his deeds.

• Saints remain pure and holy even when they do not bathe, whereas thieves and murderers remain evil even if they bathe four times a day.

These are some of the reasons on the basis of which you can go for this book:

• Interested in reading about the life and times of Guru Nanak

• Have an interest in Sikhism

• To understand the core philosophy of Baba Nanak

• A biography-cum-story type book about the founder of Sikhism