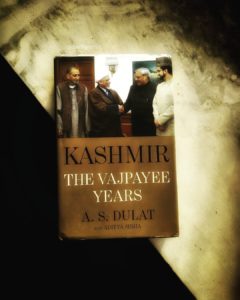 Kashmir, The land which epitomizes heaven on earth.

Kashmir, the vajpayee years, is an insider account which reveals the various initiatives which were taken by the then, NDA-1 government led by Atal Bihari Vajpayee, to resolve the complex issue of Kashmir.

And the author’s own experiences while dealing with the various stakeholders of J&K.

Although, the author of this book was the former head of the Research & Analysis Wing (R& AW) India’s spy agency.

But, I’ve to admit that Mr Dulat is very optimistic human, especially when it comes to his favorite topic, Kashmir.

In fact, throughout the book he advocated the ‘Peace Process’ and talks, talks and talks, with Pakistan as well as with the Kashmiri separatists.

Though, I don’t completely agree with the author. But one thing which he rightly said that either you can bomb Pakistan and finish them off, or you can talk with them to resolve the issue, and the latter option is more preferable than the former.

And before discussing that why the Kashmir issue hasn’t been resolved yet, it’s better to shed some light on the historical perspective that how and why the Kashmir problem started between India and Pakistan.

Pakistan was created on the basis of ‘two-nation’ theory.

According to this theory Hindus and Muslims are two different entities and they can’t live together in a single nation.

That’s why on 14 August 1947 Pakistan was created by Partitioning India.

So after the formation of Pakistan, its leaders thought that the then Maharaja of J&K will join Pakistan, because muslims constitutes the majority there.

But the naive Maharaja Hari Singh was in dilemma at that time that what should he do.

Although, after the Indian independence Maharaja Hari Singh thought that he can rule independently forever over J&K which was an anachronistic thought.

In fact, at the same time he stayed in touch with the then government of India and Pakistan. He tried to delay the issue as long as he could.

A very clever move by him at that time.

But Pakistan and its communalized leaders shattered his dreams when they decided to capture the valley by force.

And they launched the invasion of J&K with the help of tribal militia, which started the first Indo-Pak war.

After the invasion of Kashmir by the Pakistani proxies, Maharaja Hari Singh hastily decided to sign the instrument of accession with the Indian Union.

And afterwards J&K became the integral part of the Indian Union.

Though one third part of Kashmir were captured by the Pakistani army during the first Indo-Pak war.

But from 1947 to till now, Pakistan is trying to capture The Vale, with the help of jihadis.

Because after the creation of Bangladesh in 1971, Pakistan realized that conventionally they can’t defeat the Indian Armed Forces.

In Fact, other than the Muslim factor of Kashmir, there are two important things because of which Pakistan continuosly demanding the valley.

The first thing is the letter ‘K’.

As the word Pakistan is an acronym.

The original word was ‘Pakstan’, given by Chaudhary Rehmat Ali. To make it more sweet, an extra ‘I’ was added. That’s why Pakistan.

According to them without Kashmir, Pakistan is incomplete.

Secondly, The lifeline of Pakistan is those rivers which are flowing through Kashmir. And one interesting fact related to this.

The only treaty which Pakistan maintained through thick and thin with India, is the ‘Indus Water Treaty’.

That’s why we see so much of hullabaloo about Kashmir.

Those rivers are their lifeline. If India unilaterally decides to broke away with this treaty, then the consequences for Pakistan is unimaginable.

Although, Pakistan already have some portion of Kashmir with them which they captured during the first Indo-Pak war of 1947-48.

But they are gone mad for the inclusion of whole of Kashmir in Pakistan, which is unrealistic, as Gandhiji once said –

In fact, Pakistan and its ‘DEEP-STATE’ are not interested in resolving the Kashmir issue and that’s the reality.

Because for them confrontation with their nemesis, India, is necessary for maintaining the hold over their unstable country.

Though other than the Pakistani menace in Kashmir, the successive Indian governments were also responsible for letting down the people of Kashmir.

In fact, a proper dialogue is necessary not only with  Kashmiris but also with the people of Jammu, Leh and Ladakh.

In fact, Insaniyat (humanity), Jamhooriyat (democracy) and Kashmiriyat,  is the key to solve the problem of Kashmir issue.

Although talking with separatists and Pakistan is not a problem. But it would be better if the Indian government accepts its mistakes which they committed in Kashmir, and then move forward.

After reading this book, I can say that if  North Korea and USA can talk and move forward, then India and Pakistan should also talk and resolve all the issues bilaterally.

Though the author of this book showed his biasness towards the Abdullah clan of Kashmir.

But overall this book is quite enlightening. The language of the book is also not that tough.

And if you are interested in reading about Kashmir issue then you should read this book at least for once.