Khaki in dust storm, and that storm brought dust of all corners of the world, and settled in the uniform of that man who adorned it through thick and thin. And after his superannuation, that Police officer decided to share the importance of that dust which he carried with him throughout his life. A one-time read book.

Too much of water has flown through the river Ganges. But, even after that few legacies of the British Raj still remain evergreen to date in India. And one of those legacies is the institution of the Police force. In the mid 19th Century, the British created it with the sole aim of oppressing the natives. In fact, that’s how imperialism worked. Suppression and oppression of the voices of freedom at any cost.

Although, after the Indian independence few minute changes were made to the institution of police. But, they were in name only. Even today, the image of Police in India is not that good. Because, the image of baton and its use brings terror in the mind of the common people of India.

However, the same baton protects people as the first line of defense during any chaos or any unforeseen circumstances. And the author of the book also shared those experiences of his, which he saw and handled as a senior Police Officer. And the drawbacks of the institution which he served faithfully; and how one can bring good changes in it for society.

What is Khaki In Dust Storm by Amod K. Kanth?

Khaki in Dust Storm, Police diaries Book 1, communal colours and political assassinations (1980-1991), is the experiences of an IPS (Indian Police Services) officer who have had handled some of the high profile cases of the Indian Police history; and saw the horrific Anti-Sikh riots of 1984 and its effects afterwards. 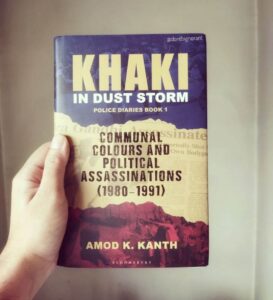 Khaki in dust storm, Memoir of an IPS officer

In fact, the main USP of this book is that Mr. Kamath was one of the senior police personnel in New Delhi, during the Delhi riots of 1984; and he also handled the case of Rajiv Gandhi’s assassination and caught several dreaded terrorists.

However, for a layman this book is not gonna help much, especially those people who are not aware about the Operation Bluestar and its horrible repercussions afterwards. That’s why, I recommend to those readers who are not aware about the history of the two most tumultuous decades (1980-1991) of Indian history, you should read about it first. Then, you can go for this book. Otherwise you will get confused.

Amod K. Kanth was born and brought up in undivided Bihar. His father was a civil servant too. In fact, he never thought during his childhood days that one day he would become a police officer himself. In fact, after his graduation he worked as a lecturer. But, as they say, No force on earth can stop an idea whose time has come. The same happened with Mr. Kanth too. In the 1970s, he qualified the prestigious UPSC, Civil Services exam. And qualified for the post of IPS. And he got the AGMUT (Arunachal Pradesh-Goa-Mizoram and Union Territories) cadre.

Amod K. Kanth started his policing career as an officer at the UT of Pondicherry (now Puducheery). And it was in Pondicherry that he learned the most underrated and neglected part of the policing, i.e. The Community-based Policing, or The People-based Policing.

In a nutshell, Community-based Policing, is like the PPP (Public Private Partnership) model. And instead of carrying on with that paternalistic colonial mindset, in community-based policing, the frequent interactions between the Police and the public generates a level of trust between them, which will not only help in combating law and order problems beforehand. But, it also serves as a model for good governance, where the citizens and the institutions contribute equally for the betterment of society and country in general.

The chaos and too powerful storm

In October 1984, India’s first woman, Prime Minister, Indira Gandhi, daughter of India’s first PM, Jawaharlal Nehru, was assassinated by her two security guards, who happened to be Sikhs. The latter were upset due to the damage done to the Golden Temple during the Operation Bluestar. So, they took their revenge by neutralising her.

Mrs Gandhi’s assassination changed the course of Indian history. Especially, it changed the communal harmony of New Delhi and Punjab, the two worst affected parts during that period of history. Within few hours of her death, like the fire in the woods. It engulfed the Sikhs of New Delhi. Anti-Sikh riots started in New Delhi and other parts of India. Hapless Sikhs were killed for no reason by the hooligans.

Two fortnights of November 1984, was a serious blot on Post-Independence Indian history. Mr Kanth also shared his views about that horrible part of our history. In fact, he was on the ground at that time. As one of the senior officers of the New Delhi Police, he saw the communal frenzy of people. And he also experienced the ineffectiveness of the Delhi Police during the 1984 riots of Delhi. Although, he saved several people. Also got a gallantry award for his services during the riots. But, no one forgets those innocent voices who were silenced mercilessly.

In fact, the pogrom of 1984, tells us that the ineffectiveness of an institution like the Police during the conflict or riot, can cause serious damage to the social fabric of a diverse nation like India. And as the world’s largest democracy, India can’t afford to repeat the same mistakes time and again.

These are the following reasons for which you can consider reading this book,

1. If you are preparing for UPSC civil services, and wanna serve as an IPS officer, then you go for this book.

2. If you wanna a glimpse of the 1984 Anti-Sikh riots and its effects afterwards.

3. The importance of Community-based Policing, especially in the context of a multi-religious and multi-linguistic country like India.

You can also order your copy of the book from here- Khaki in dust storm book.