Letters From A Father To His Daughter By Nehru

Letters from a father to his daughter, not only tells us about the ingenious way of a father who taught his beloved child about this world of ours through his letters. But, it also showed the acumen of that man who went on to become the first Prime Minister of independent India. A must read book.

Writing is a kind of joy, isn’t it. Especially, when someone pours his or her heart out in the form of a letter. But, with time and the advancement of technology, gone were those days when people used to write long letters to their near and dear one. However, even today there are people who used to write letters, but they are miniscule in numbers.

So, let’s see what letters from a father to his daughter apprise us about a father and his letters through which he introduced the mysteries of this world in front of his child.

What is Letters from a father to his daughter by Jawaharlal Nehru? 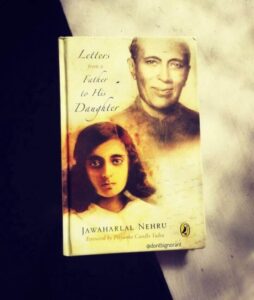 Letters from a father to his daughter, Pandit Nehru to Indira.

These letters were written by Nehru in 1928. At that time, Indira was ten years old. In fact, through these letters Pandit Nehru introduced a way to teach his daughter about the universe, the planet Earth, about nature and human civilization.

The letters were written in a layman’s language. And the way through which Pandit Nehru explained about different topics, whether it’s science, history and human civilization, is laudable.

From Nehru to Indira-

Jawaharlal Nehru, was one of the highly well read freedom fighters of India. In fact, these letters tell us a lot about his intellectual prowess. From the formation of planet Earth to the examples of ancient human civilizations. Nehru had quoted all of them in these letters to Indira.

In fact, he said this to his daughter,

I am going to write you short accounts of the story of our earth and the many countries, great and small, into which it is divided. I hope (these) will make you think of the world as a whole and of other people in it as our brothers and sisters.

The statement above sums up his staunch belief in the ancient Indian principle of Vasudhaiva Kutumbakam, which means, “the world is one big family”

These are the following reasons for which you can consider this book,

1. Shows the love of a father towards his daughter

2. An ingenious way of teaching children

5. This book shows that, Knowledge is Power

Let me conclude with these lines of Pandit Nehru,

Ignorance is always afraid of change.

You can also order your copy of the book from here- Letters from a father to his daughter book.