Whether a soldier dies in a terrorist encounter in the valley, or gets buried in snow at the Siachen glacier, or is shot down by enemy bullets or blown apart by land mines at the border- they all have one thing in common, and that is an unparalleled love for their country. 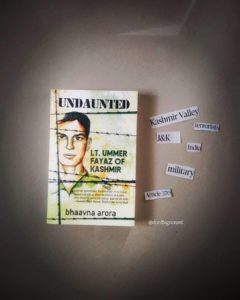 Undaunted, LT. Ummer fayaz of kashmir is thoroughly researched and written in a wonderful way by the author.

Throughout this book the author remained neutral which makes the reading more interesting.

So, let’s start with some basic questions.

Who was Ummer Fayaz?

LT. Ummer Fayaz, was a commissioned officer of 2 Raj Rif, a prestigious unit of the celebrated Rajputana Rifles regiment.

Ummer was born and brought up in the valley of Kashmir, India.

He was a bright child and a good student that’s why after completing his schooling he qualified the prestigious exam of NDA conducted by the Union public service commission (UPSC) in his first attempt itself.

After completing his training at NDA, Pune and IMA, Dehradun, Ummer Fayaz became a commissioned officer of the Indian Army.

But on May 9 2017, LT. Ummer Fayaz was kidnapped from his maternal grandparents home, and was brutally murdered by the militants.

The reason for his killing was simple, because Ummer joined the mainstream and the Indian army, instead of throwing stones like the other kashmiri stone pelters.

Ummer realized very early in his life that peace in the valley will come when you join the mainstream rather than doing things against your own country.

He was only twenty two years old when he sacrificed himself for the sake of his nation.

He showed the dedication, courage and the love for his nation. He was a Brave Soul indeed.

What the people of Kashmir can learn from him :-

People of kashmir can learn a lot from LT. Ummer Fayaz.

First and foremost is the unparalleled love which he showed for his nation.

Secondly, pen is mightier than the sword, and he proved it by becoming a commissioned officer of the Indian army.

And lastly joining the mainstream will help the people of kashmir in the long run.

Lt. Ummer Fayaz of kashmir is an idea and you can’t kill an idea. Albeit, this brave young man is not amongst us physically because he was killed by the terrorists. But this courageous soul is the best example which epitomizes ‘Kashmiriyat’.