Malala Yousafzai : The Girl Who Was Shot By The Taliban

I am Malala, The girl who stood up for education and was shot by the Taliban by Malala Yousafzai is an inspirational story which proved that the pen is mightier than the sword.

Fanatics, conservatives, and narrow minded people are more afraid of an educated person. Because they are aware that they can’t answer their meaningful and logical questions. 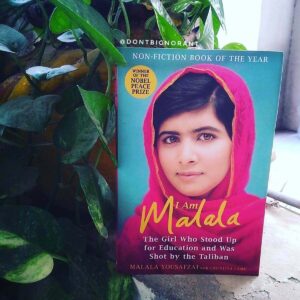 Especially, when an educated woman questions them and their heinous motives. Then, either they try to malign her character or they made sure that she will be silenced forever.

Malala Yousafzai is one of the many courageous woman out there who questioned them. And in return they tried to kill her.

So, here the questions arises.

Who is Malala Yousafzai?

Malala Yousafzai is the youngest Nobel Prize winner until now.

She won the Nobel Peace Prize along with the Child activist Kailash Satyarthi of India.

She is a vocal activist for the female education.

And according to her education is the basic fundamental right of every children out there.

Malala Yousafzai was born on 12 July 1997 to Ziauddin Yousafzai and Toor Pekai.

She is from the beautiful valley of Swat, Pakistan.

She was named after the Malalai of Maiwand, the greatest heroine of Afghanistan.

Although, Malala is a renowned personality now. But, the person who supported her through thick and thin is her father, Ziauddin Yousafzai.

Before we talk about Malala and her story let’s discuss about her father.

Who is Ziauddin Yousafzai?

Ziauddin Yousafzai is a Pashtun from the Yousafzai tribe. And the father of Malala Yousafzai.

He started the Khushal School in the City of Mingora, Swat.

And it was in her father’s school where Malala received her early education.

The curious mind, the habit of reading good books, helping the downtrodden people are some of the many traits which Malala received from her father.

This man is an example for others who think that educating girl child is not necessary. The way he supported his daughter is laudable.

In fact, the world needs more men like him. Who are brave and will stand by with their daughters.

Why Malala was shot by the Taliban?

We need to understand the context before answering this question.

I’m sure most of you have somewhere heard the name the Taliban. If not then i’ll try to explain in a layman’s words.

Those people who study in the madrasas (Islamic religious institutions) are known as the ‘Talibs’.

And the Taliban is the plural form of Talib.

I hope now you understand the meaning behind the word, The Taliban.

After the World War Second, the two eminent powers who ruled over the world were the Soviet Union (Now Russia) & the USA.

These two countries hated each other like snake and mongoose.

United States of America, Pakistan and Saudi Arabia funded, armed and trained those Afghans who later on became famous as the Taliban.

Especially, Pakistan used them as their Proxies against their arch-rival India, in the state of Jammu and Kashmir.

Although, the Soviet Union was defeated badly by the combined forces of Afghan mujhadeens and the support of the countries mentioned above.

But, it unleashed some of the forces who became beyond the control of anyone.

Especially, after the incident of 9/11, when United States launched the so-called ‘War on terror’.

Like Soviet Russia, they also invaded Afghanistan (2001- until now) to capture the head of the Al-Qaeda, Osama bin Laden.

When United States invaded Afghanistan at that time, The Taliban (1996-2001) was ruling there.

Although, they had caught and killed the man who was behind the incident of 9/11, Osama bin Laden, in Abbottabad, Pakistan.

But, the same forces had gathered in and around the tribal areas of Pakistan, bordering Afghanistan.

Around 2007, the Tehrik-i-Taliban Pakistan (TTP) was formed.

The motive of this terrorists organization is to implement the Sharia law all over Pakistan. And to Talibanise the whole country.

In 2007, The Pakistani Taliban came to the swat valley. The homeland of Malala.

Their leader was Mullah Fazlullah, also known as the Radio Mullah. Because he used to give his ludicrous sermons on FM.

Like the Afghan Taliban, they started implementing their inhumane agendas.

First they banned the music, destroyed the historical statues of Buddha (The Pride of Swat), telling men and women how to dress.

And finally, they banned the girls from going to school.

She and her father started opposing such kind of ban.

They gave several interviews to national and international media organisations about the situation in their valley.

In fact, they became Internally displaced persons (IDPs) in their own country.

Because, the Pakistani army launched the operation to remove the Taliban from the Swat Valley.

Although, their army was partially successful in removing the menace of the Taliban from the valley. But, the threat was always there.

When Malala and her family came back to the city of Mingora. She and her father started their school again.

And for Taliban, a pen, a book, is more dangerous than Kalashnikov and nuke.

That’s why on 9 October 2012, a Talib, shot Malala Yousafzai and her two friends on the school bus.

She was almost dead. But, as they say,

‘No force on Earth can stop an idea whose time has come’.

Not only her life was saved by the smart work of several doctors and nurses.

But, it also gave her mission a boost throughout the world.

The mission to make sure that every child receives a sound and just education.

Is Malala Yousafzai an inspiration or an imposter?

The beauty lies in the eye of the beholder

People like Abdul Ghaffar khan & Barack Obama are the inspiration for Malala.

Although, she wants to be an influential Politician like Benazir Bhutto.

But, being a politician is not everyone’s cup of tea. Especially, in a country like Pakistan.

The story of Malala is an inspiration for many. But, her activism is selective.

She talks about the rights of minorities of every other country.

But, when it comes to the Minorities of Pakistan she can’t spell a single word.

And selective activism is as uncool as selective humanism.

Her story not only tells us the importance of education. But, it also gave us an important message that a country without pluralism, secularism and humanism is unsafe not only for women but for every sane human out there.

And it’s our responsibility to raise our voice and protect everyone out there who is working for the humanity and planet Earth, without looking at her religion, caste, creed and ethnicity.

‘One Child, One Teacher, One Book & One Pen Can Change The World.’