Manyavar Kanshiram : The Founder of the Bahujan Samaj Party (BSP)

Manyavar Kanshiram the founder of the Bahujan Samaj Party (BSP) and the leaders of the Dalits was a self-made man. And a down-to-earth human.

That the caste system must be abolished if the Hindu society is to be reconstructed on the basis of equality, goes without saying. Untouchability has its roots in the caste system. They cannot expect the Brahmins to rise in revolt against the caste system. Also we cannot rely upon the non-Brahmins and ask them to fight our battle. 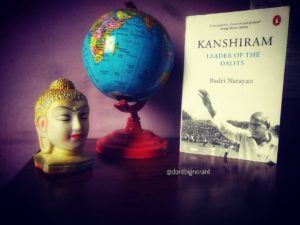 Kanshiram, The man behind the creation of Bahujan Samaj Party (BSP).

Kanshiram, leader of the Dalits is a concise and a well written biography of Manyavar Kanshiram.

So, here some of the basic questions arises.

Who was Manyavar Kanshiram?

Manyavar Kanshiram was the founder of the Bahujan samaj party (BSP).

And after Baba Saheb Ambedkar, he is the most important icon for the Dalits of India.

There are many reasons because of which Kanshiram launched the BSP.

But the most important reason because of which he started his Bahujan (Majority) movement was that after the Indian Independence there was not a single political party which represented the aspirations of the Dalits of Hindustan.

Although, Kanshiram was born and brought up in the Indian state of Punjab. But he set up his base in the state of Uttar Pradesh.

Contribution of Manyavar Kanshiram for the Dalits:-

Kanshiram’s contribution for the upliftment of the Dalits was immense, especially for the Dalits of UP.

He gave them the self-confidence to be proud of their caste and identity instead of being humiliated by it.

He popularized the local dalit icons. He also spread the message of Dr B.R. Ambedkar amongst the Dalits.

Difference between the ideology of Kanshiram and Baba Saheb Ambedkar :-

Albeit, Ambedkar and Kanshiram dreamt of a casteless society but their methods to achieve this target was very different.

The former always talked about the annihilation of caste unlike the latter.

Ambedkar was in favor of inter-dining & intermarriage as a way to remove caste from the Indian society which Kanshiram didn’t propagated.

Kanshiram reinvented and propagated the ideology of Ambedkar in his own way.

For Kanshiram the end always justified the means.

That’s why on several occasions he accepted the support of the Bharatiya Janata Party (BJP) to form his government in the state of UP.

In fact, the first time Mayawati became the Chief Minister of UP in 1995 it was because of the support of the BJP, which is very ironic in itself.

And this incident is enough to show that Kanshiram believed in capturing power by hook or crook.

Kanshiram declared mayawati as his political heir because he found the charisma and dedication in her.

But, that’s the sad reality that after his death in 2006 the ideology of the BSP has been diluted.

I will with these lines of Dr B.R. Ambedkar –

“A great man is different from an eminent one in that he is ready to be the servant of the society.”