Masih Alinejad : The Wind In My Hair

The wind in my hair, My fight for freedom in modern Iran is a courageous memoir of a Brave Woman by the name of Masih Alinejad. She challenged the unjust law which is prevailing in her country due to which she was forced to live in exile. 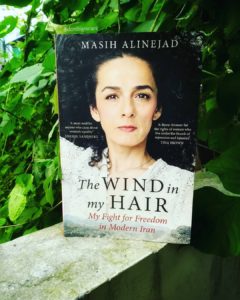 Masih Alinejad, The woman who challenged the compulsory law of Hijab in Iran.

Freedom is a seven letter word. But, what does freedom means to you?

Freedom means different things to different people, but for me ‘Freedom’ is a ‘Soul’, without which the human body is lifeless.

Freedom is the most taken-for-granted thing. People don’t realise its importance until it has been taken away from them, especially in democratic countries.

Living the life under a dictatorship is like experiencing hell without dying. So, value democracy and mostly importantly don’t underestimate the value of Freedom.

Who is Masih Alinejad?

Masih Alinejad is an investigative journalist and a women rights activist.

She was born in a nondescript village in northern Iran. She was a mischievous child, that’s why she was jailed for her Revolutionary activities.

Masih was forced to live in exile in the United States of America because of various reasons.

One of the important reasons of her exile is that patriarchal societies do not like an independent minded woman like her.

As an investigative journalist she raised several issues while covering the majlis (Parliament) of Iran, due to which she became a thorn in the eyes of those who control the reins of power in Iran.

She raised the issue of the compulsory hijab (A veil or a headscarf) law in Iran.

She was not against the hijab, but according to her let the women decide what they want to wear, or what they won’t. And because of this she became a pariah.

Masih Alinejad also talks about the gender equality, about the humane laws, and most importantly she has raised the issue of ‘Freedom’ which should be cherished and protected at all cost. This is her message which she mentioned in her book.

Women like her are the Epitome of Courage. And whenever the government of any nation or any institution tries to take away the freedom of individuals, the people of that country should raise their voice against such kind of injustice.

Because without ‘Freedom’ life is like living in a Jail. So, don’t be silent whenever you see or hear any kind of injustice.

I will conclude with these lines of her :-

I am a child of that Islamic revolution and have lived nearly all my life under its shadow. My story is the story of modern Iran, the tension between the secular tendencies of its and the forced islamification of the society, and the struggle of women, especially young women, for their rights against the introduction of sharia law, against violations of human-rights and civil-liberties.

Order your Copy from here –