‘Educationist should build the capacities of the spirit of inquiry, creativity, entrepreneurial and moral leadership among students and become their role model’. 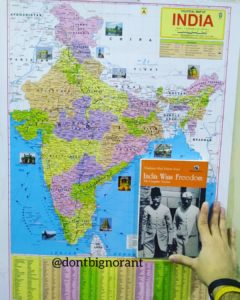 India wins freedom is the autobiography of Maulana Azad and the story of the Indian freedom movement through the words of the great son of mother India, Maulana Abul Kalam Azad.

So, here the question arises who was Maulana Azad? What’s his contribution in the Indian freedom movement? And why we read this particular book?

But before answering all these questions we have to keep in mind that although India has gained its Independence on 15 August 1947.

But in this long freedom struggle of us, uncountable number of men and women had sacrificed themselves very bravely in the ‘Altar of the Independence’.

And because of them, we the people of India, can write, speak, eat and vote freely without any fear.

Who was Maulana Abul Kalam Azad?

“Maulana Abul Kalam Azad”, was independent India’s first education minister and one of the greatest freedom fighters of India.

He was born in mecca in 1888. But later his father shifted to Calcutta in 1890 along with his whole family.

In Calcutta, he was influenced by the Indian revolutionaries, and he also worked with them.

Maulana Abul Kalam Azad, was the president of the Indian National Congress (INC) for seven years from 1939 to 1946.

He was in charge of negotiations with Cripps, with Lord Wavell and the Cabinet Mission. In fact, He was against the Partition of India throughout his life. He also tried several times to save the country from Partition but in the end India was partitioned.

Although, some of his comments in this book is very bold and controversial too. Like, according to him Sardar Vallabhbhai Patel was the real founder of the India’s Partition.

He also highlighted some of the blunders commited by Jawaharlal Nehru  and Mahatma Gandhi during the Indian freedom struggle.

And most importantly Maulana Abul Kalam Azad predicted in 1947 itself that Pakistan will be dismembered sooner or later. His prediction was accurate when in 1971 the Eastern wing of Pakistan rebelled against their own country, and a new nation by the name of Bangladesh was born.

When you will read this book you will realize that freedom comes with a cost. And the people who paid the cost for India’s freedom are our great freedom fighters.

And these braves souls are the true heroes and heroines of India. And that’s why you should read this book.

I will end with these lines of Maulana Azad-

To succeed in your mission, you must have single-minded devotion to your goal.