Muhammad Bin Tughlaq Tale Of A Tyrant By Anuja Chandramouli

Anuja Chandramouli’s book, Muhammad Bin Tughlaq, Tale of a Tyrant, is an attempt to unravel the story of one of the most loathed figures in Indian history. However, those people who aren’t aware of the Tughlaq Dynasty will find themselves in pain while reading this book. So, it’s better to avoid it. An okay kind of book.

History and historical personalities are quite fascinating, isn’t it? Especially those who, after their death, were reviled back then and even now as the epitome of evilness and cruelty. In fact, whenever people want to demean someone, they like to compare him or her with those reviled historical figures. Like Aurangzeb, the infamous Mughal Emperor and the younger brother of Dara Shikoh, who not only imprisoned his father Shahjahan, but also butchered his brother Dara.

Similarly, there is another character in the medieval history of India by the name of Sultan Muhammad Bin Tughlaq, who was renowned for his hasty decisions and brutality, due to which he was termed as the “Mad Sultan” by his subjects. In fact, in Indian politics, historical personalities like Aurangzeb and Muhammad Bin Tughlaq are too famous because whenever any political party or any politician wants to make fun of their opponent, at that time they use the names of these people. That’s why, even after their deaths, these cursed people are still alive amongst the multitudes of India.

So, let’s talk about this mad tyrant king of Hindustan.

What is Muhammad Bin Tughlaq, Tale of a Tyrant by Anuja Chandramouli?

Muhammad Bin Tughlaq, Tale of a Tyrant is a work of historical fiction based on the life and times of the second sultan of the Tughlaq dynasty. The author has tried to present the protagonist as a king who was judged too harshly by the people without realising that some of his reforms or thoughts were hasty, but they were also necessary for the greater good of the people. 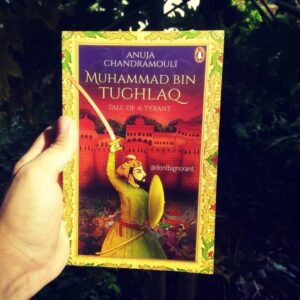 However, this book is not meant for everyone. Those readers who have no idea about the Delhi Sultanate and its history are not going to enjoy this one. So, I recommend this book to those readers who are history buffs, and even those who are preparing for civil services can consider this one. The language of the book is not that tough.

Fakhiruddin Muhammad Jauna Khan aka Muhammad Bin Tughlaq was the second Sultan of the Tughlaq dynasty and the eldest son of Ghiyasuddin Tughlaq. The latter established the dynasty in the 14th century after the Khiljis of the Delhi Sultanate.

Bin Tughlaq was given different names, like he is also known as the ‘Pagal Raja’ because of the blunders which he made in his life and times. Such as shifting the capital from Dilli (Delhi) to Daulatabad; starting a copper currency which they called the tanka; and other immature acts which made the lives of his people painful and miserable.

These are some of the important points related to the reign of Muhammad Bin Tughlaq,

• Muhammad Tughlaq ascended to the throne when his father, Sultan Ghiyasuddin, died in an accident. In fact, in a hushed voice, people used to label him as the one who committed patricide.

• Bin Tughlaq married his stepmother, Saira. And he was accused by the ulemas of committing infidelity.

• Ibn Battuta, the Moroccan traveller and author of “Kitab-ul-Rihla.” And Ziyauddin Barani, the historian and the author of the Tarikh-i-Firoz Shahi, are two important sources to understand the reign of Muhammad Bin Tughlaq.

• Bin Tughlaq had some serious issues with the ulemas (Islamic scholars) during his rule.

1. A work of historical fiction