Nehru’s India, Essays on the Maker of a Nation

Nehru’s India, Essays on the maker of a nation is a series of essays written by some renowned personalities of India.

The book is not that good and majority of the essays are very dull and boring. And I won’t recommend this book to readers.

Pandit Jawaharlal Nehru, The first prime minister of Independent India was a gigantic book in himself which needs to be read diligently before passing any kind of judgement (s).

But, the main issue in India is that without knowing anything about anyone, people like to give their ignorant views, and they feel blissful that they are ignorant. That’s an irony in itself.

Brits ruled India for almost 150-200 years with an iron fist. In fact, how they looted and divided India can be gauged by reading one of the famous books of Mr Shashi Tharoor, An Era Of Darkness, The British Empire In India.

At that time they (The British) not only widened the religious fault lines which were already there in hindustan but they also made sure that these divisions amongst the people of India because of their caste, creed, religion and ethnicity will stay there even when they are not here physically present to exploit. 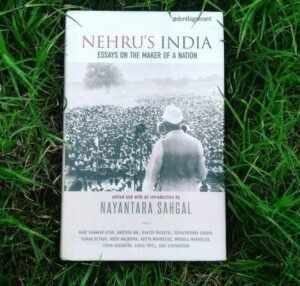 Nehru’s India, Essays on the maker of a nation.

When India gained its independence in 1947 there were chaos everywhere. The so-called pundits of ‘Geopolitics’ and history predicted that India will either collapse due to its sheer size, or Balkanize.

But, they didn’t knew that under the guidance of Mahatma Gandhi, people like Nehru, Sardar Patel, Maulana Azad and Ambedkar not only proved them wrong, but they also directed India towards a plural and an inclusive democracy.

People like Nehru not only invested heavily in democracy and other democratic institutions. But throughout his life he fought against those forces who believed and propagated ideologies of Fascism and communalism.

‘India is the world’s largest Democracy’, and this became possible because of the enlightened and democratic leadership of Pandit Nehru and other freedom fighters like him. In fact, during his tenure he built these modern institutions.

Though, Nehru did some blunders too during his life. Like, he trusted Chinese too much, and his trust was broken horribly by the Chinese in the year 1962 during the ‘Indo-Sino War’.

But, no one is perfect. Even softwares and robots can make mistakes.

Before demonizing Nehru we need to understand this fact clearly. Buying an Apple iPhone is too easy but purchasing a geographical map of India and the world is not that easy, isn’t it.

If we look at the map of the Indian subcontinent, then, we can gauge that what he did for this great country of ours.

In north we have China, a totalitarian nation with no regards and respect for individual freedom and other democratic rights which we in India take for granted.

In the Northwest we have Pakistan and Afghanistan. The former gained its independence in 1947, but since its creation half of the time it was ruled by the military generals.

In India no coup has ever occurred other than the emergency in 1975. And we all are aware about Afghanistan and the mess they are in because of the tribal divisions amongst them.

In the Northeast we have countries like Myanmar and Bangladesh ( A nation for The Bengalis created with the support of India). Though, both the nations have done quite well in the recent past but they too had seen the dictatorship of the armed forces.

Finally, in the South we have Sri Lanka which until 2009 was ravaged by the ‘Civil War’.

Nehru died in 1964. He remained as the ‘PM of India’ for seventeen long years.

Blaming him for every single issue which we are facing at present is like showing our own ignorance about our history.

In fact, Nehru’s India is all about an inclusive and a plural democracy. And we need to cherish and nurture it at all cost.

I will end with these lines of Nehru :-

The person who talks most of his own virtue is often the least virtuous.