One Part Woman, and that part reminds the people of the land of Kamasutra, that though the word sex is taboo within the society. But, there are some examples of the age-old traditions which in today’s world of the so-called morality, would be labelled as immoral. A thought provoking story.

There so many wonders to talk about, India, one of the oldest civilizations of the world. And some of these surreal traditions can be mind-boggling for some people. Especially for those who aren’t aware about the ancient Indian concept of niyog and other similar practices.

Niyoga or Niyog is an ancient Indian tradition, in which a woman (whose husband is either impotent or has died without having a child) would request and appoint a person for helping her conceive a child. According to this tradition the man who was appointed must be or would most likely be a revered person within the society. Even the Pandavas were born through Niyog.

In fact, some of the practices related to love-making are even practiced till today in different parts of the country. And the author of this novel talks about it with his own way of story telling.

What is One Part Woman by Perumal Murugan?

One Part Woman, is the story of a childless couple by the name of Kali and Poona. And the vicious struggle which they endured from society, their near, and dear ones, because of their childlessness. 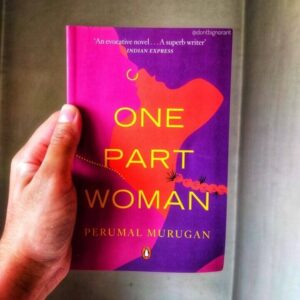 In fact, the place where both of them were born and brought up has an ancient way through which they can get a child. But for that Kali’s wife would have to sleep with an unknown man during the chariot festival of the half-female god, Maadhorubaagan. The title of the book is also inspired by the latter.

The story is not only interesting, but at the same time it also tells us about the moral degradation of the society which constantly ensured mental harassment of a couple. Because according to them, without a child, they are incomplete.

Like the protagonists of Khushwant Singh’s novel, Train To Pakistan, Kali and Poona, were two bodies, but one soul. The bond between them was so strong that sometimes through sign language they used to communicate each other’s feelings. But, even after twelve years of their marriage, they couldn’t conceive a child. In fact, they tried everything to get a child. They visited several temples and offered prayers. But, all in vain.

Whether it’s Poona’s mother, father, brother, or Kali’s mother. All of them were always worried about them. In fact, sometimes all of this murmur about the child, irritated both Kali and Poona. But, they can’t do anything. So, they just ignored what people were saying about them.

The beginning of the trial

It was Kali’s mother who brought up the topic of the ancient tradition through which Poona could conceive. Although, Kali was aware about the tradition. In fact, he himself visited the chariot festival before his marriage to Poona. But, hearing about it from his mother was surreal for him.

How could he let his beloved wife sleep with a stranger just for the sake of a child. However, according to the popular belief, those men with whom childless women cohabit during the last day of the festival, were considered as gods.

But, Kali won’t allow any of this at any cost. Even his in-laws were also ready for this. In fact, once Kali, out of the blue, asked Poona about this. And the reply which he received was in the affirmative. Although, Poona said clearly that for your happiness I can do anything, even this. But, Kali didn’t expect this answer from her. He was just checking on her to see her reaction.

It was Poona’s brother, Muthu, who hatched this plan. Muthu and Kali were close friends. That’s why Muthu asked Kali about the chariot festival. Although, Kali said that he will send Poona to the chariot festival, but he didn’t say that he will let her cohabit with another man just for the sake of the child. But, except Kali everyone else had already made up their mind.

Muthu took Kali with him far away to a distant village for drinking and food. At the same time, Poona’s mother and father, took her to the last day of the chariot festival. However, Poona thought that Kali had gave her permission for this. That’s why she decided to go to the festival.

While Kali was enjoying his drinks, Poona was lost in the melee of the festival. She met a few men there, but she ignored them. But, after a while she came across a man and they both decided to go far away. And Poona thought this man would fulfill her dream of being a mother. And he took her far away from the chaos of the festival.

In between all of this, Kali kept thinking about Poona. So, in the middle of the night he left that place for his in-laws home to meet his beloved Poona. But, when he reached his in-laws house, he saw no one. Even the house was locked. By seeing this, Kali lost his senses. He cursed Poona. He thought that she had cheated on him. And he cried while continuously abusing Poona.

The story ends here. The sequel to one part woman is written by the author in two parts. The first one is, a lonely harvest, and the second one is, trail by silence. I’ll write about it too soon.

I’ll not stay any longer in this land of injustice/I’ll go to a place where there are no hellhounds.

I hope you like this, Thanks for reading. Jai Hind.