Operation Bluestar was one of the many blunders committeed by the first woman Prime Minister of India, Indira Feroze Gandhi. 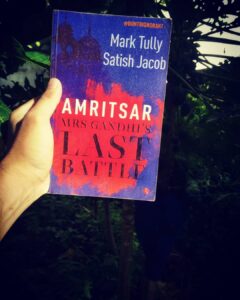 Amritsar, Mrs Gandhi’s Last Battle by Mark Tully and Satish Jacob is one of those rare books on Operation Bluestar which not only tells us about the reality of that infamous military operation, but at the same time it reveals some of the follies of Indira Feroze Gandhi and the leaders of the Akali dal.

Indira Feroze Gandhi, the woman who not only ruled India for almost fifteen years (1966-77 & 1980-84) with an iron fist during her prime ministership.

But she also committeed the most sacrilegious act of her life by sending the Indian Army in the most sacred shrine of the Sikh community, The Golden temple (Harmandir Sahib) and the Akal Takht.

This controversial decision of her not only costed her life but it had also threatened the unity of India.

What was Operation Bluestar?

On 5th June 1984, Indian Army launched the Operation Bluestar to flush out the terrorists and to capture the Sikh Fundamentalist, Jarnail Singh Bhindranwale who had occupied the Golden Temple complex and the Akal Takht.

Although, Operation Bluestar was successfully carried out by the Brave soldiers of India but in that process, the Akal Takht which symbolises the temporal power of God was reduced to rubble.

And The Harmandir Sahib (Golden Temple) also got damaged in that act.

During the execution of the Operation Bluestar not only innocent civilians died but some of the bravest warriors of the Indian army also lost their lives.

Though, Zealots like Jarnail Singh Bhindranwale and his associates were killed during the Operation Bluestar but due to this operation several units of the Sikh Regiment of the Indian Army mutinied.

This was the first time since the Indian independence that the Indian army had faced indiscipline like this in their ranks. One of the many outcomes of the Operation Bluestar.

Who was Jarnail Singh Bhindranwale?

Jarnail Singh Bhindranwale was a fundamentalist Sikh Preacher and the head of the influential ‘Damdami Taksal’.

Damdami Taksal is one of most influential sikh school founded by one of the great heroes of Sikhism, Baba Deep Singh.

Bhindranwale was an obscure preacher when he started but because of some narrow-minded leaders of the Indian National Congress (INC) party he became a force to reckon with.

To counter the Akalis in Punjab, the policy of ‘Divide-and-Rule’ was used by the Congress Party.

People like Giani Jail Singh (Former President of the Union of India) gave his support and blessings to zealots like Jarnail Singh Bhindranwale.

In fact, Bhindranwale was the creation of the Congress party. A Frankenstein monster was created by them which they thought they can control but they couldn’t.

‘Religion is the last refuge of a scoundrel.’

Throughout the 1980s, Bhindranwale spoke against the Hindus, Hinduism, and the other subsects of the Sikhism, including the Nirankari sect.

The poison which he had spread through his sermons created a reign of terror throughout the Punjab.

Daily killings of innocent people, burning of shops of people of the minority community became the law of the land in Punjab.

The state bureaucracy and the Punjab police of that time were also in bed with Bhindranwale. That’s why the killings never stopped and Jarnail Singh and his disciples committeed some of the heinous acts with impunity.

In fact, Indira Feroze Gandhi whom the people gave the title of ‘Durga’ (Indian Goddess) during the Bangladesh war of liberation in 1971 when she acted decisively and broke the Islamic Republic of  Pakistan into two pieces, became so lethargic and indecisive that people throughout the land of Hindustan began to question about her leadership.

When finally she decided to act it was already too late. Bhindranwale and people like Major-General Shabeg Singh already fortified the Golden Temple and the Akal Takht before the Indian Army started the Operation Bluestar.

That’s what the first woman prime minister of India had said during her last public speech in Orissa (now Odisha) :-

‘I do not worry whether I live or not. As long as there is any breath in me, I will go on serving you. When I die, every single drop of my blood will give strength to India and sustain United India.’

Satwant Singh and Beant Singh killed Indira Feroze Gandhi because according to them, she had committed the blasphemy by sending the Armed forces to the Harmandir Sahib (Golden Temple).

With her death, She became the first Indian PM to be assassinated.

In fact, within a span of few hours of her death, anti-sikh riots were started in New Delhi. Uncountable number of innocent Sikhs were butchered by the hooligans and Indira’s heir apparent, Rajiv Gandhi did nothing to stop the pogrom against the Sikh community.

When Guru Nanak Dev Ji Maharaj  started the movement which later on became a new religion by the name of Sikhism, he preached against the caste, creed, superstition and ignorance.

He started the concept of Sangat (Community) and Pangat (Dine together).

In Fact, When the fifth Sikh Guru, Arjun dev started the construction of Harmandir Sahib, he invited a muslim sufi mystic of Lahore by the name of Mian Mir to laid the foundation stone.

All these acts pinpoint us that, ‘Unity in Diversity’ is the foundation on which Indian civilization rests.

As responsible citizens of India, it’s our responsibility and a sacred duty that we don’t let anyone to poison the atmosphere of Hindustan by using caste, creed, religion, race and ethnicity.

“United we stand, divided we fall.”

I hope you like this, Thanks For Reading, Jai Hind.