Pakistan’s Nuclear Bomb : A Story Of Defiance, Deterrence And Deviance

Pakistan’s nuclear bomb, A story of defiance, deterrence and deviance is a thoroughly researched and judiciously written book about the making of the so-called Islamic bomb and the heinous agendas of the people behind the infamous nuclear proliferation.

It’s a must read book for those people who are interested in knowing about the history of the Pakistan’s nuclear programme and the people who made Pakistan a nuclear power. 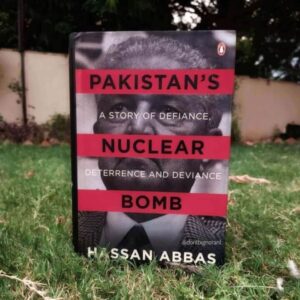 In fact, the main USP of this book is that it can be read by a layman also. Easy to understand. Although, a little bit of knowledge about the history of Pakistan will make the reading more interesting.

Homo Sapiens, that’s what we humans are. In short, Thinking People, isn’t it. Humans have developed so many good things for the development of the mankind. But, at the same time the same human beings also developed those things which not only can destroy the entire humanity but it can damage the entire planet Earth.

At present only nine countries have recognised by the world as the nuclear power states.

United States, United Kingdom, France, Russia, China, India, Israel, Pakistan and North Korea ( The Kingdom of Kim Dynasty ). are those nine nations which have the nuclear weapons at their disposal.

Although, nuclear weapons were used in a war and against the humanity only twice. It was the United States of America who used the nuclear weapons against Japan during the World War II.

In fact, US is the only country who had used nuclear weapons in a war. In August 1945, they have had dropped two nuclear bombs on the Japanese city of Hiroshima and Nagasaki.

Little Boy and the Fat Man that were the names of those two nuclear bombs who killed multitudes in Hiroshima and Nagasaki.

Although, the world has moved on but the destruction can’t be forgotten. But, that doesn’t stopped countries from making nuclear weapons. In fact, even today arms race is going on amongst the big powers. That’s an irony in itself.

The case of how Pakistan became a nuclear powered state and how they have indulged in nuclear proliferation tells us the risk and pitfalls when a fragile nation possesses the know-how of nuclear technology.

So, let’s explore Pakistan’s nuclear bomb case and its repercussions.

The Birth of an insecure nation –

On August 14, 1947, World’s first Islamic nation was born. The state was none other than Pakistan. It came into its being by dividing India.

Mohammad Ali Jinnah was the founding father of Pakistan. He created a separate homeland for the Muslims of South Asia by believing that in a United India they can’t do well.

Although, it’s a tragedy that he died in 1948. In fact, the first prime minister of Pakistan, Liaquat Ali Khan was also assassinated in 1951 unlike India where Jawaharlal Nehru remained as the Prime Minister of India for 17 years.

The ingrained fear that one day India will capture the territory of Pakistan and unite it with the rest of the India gave rise to birth of an insecure nation state or we can say the formation of a ‘National Security State’.

In fact, Pakistan inherited one third army of the British India and almost 70% of its first budget goes to the army also gave phillip to the national security state.

Here, national security state means, A state where the army is the supreme and all powerful.

Although, at that time Pakistan and its establishment didn’t thought about pursuing nuclear weapons. But, it changed when India conducted its first nuclear detonation and the religious zeal of Zulfikar Ali Bhutto towards acquiring nuclear weapons anyhow.

The fear of India breaking Pakistan into several pieces came true when the Eastern Wing of Pakistan rebelled against the brutality of the West Pakistan. This uprising gave birth to a new nation by the name of Bangladesh. A country of The Bengalis.

In fact, When India conducted its first nuclear test, The Smiling Buddha, in May 1974, Zulfikar Ali Bhutto ( The first democratically elected prime minister of Pakistan and the father of Benazir Bhutto ) said famously,

Pakistan will eat grass or leaves, even go hungry in order to develop a nuclear programme of its own.

Although, developing nuclear technology is not everyone’s cup of tea. Well educated and highly skilled people is a must in this technology. Albeit, Pakistan had few highly skilled scientists in this field but the things changed for Pakistan when a man by the name of Abdul Qadeer Khan ( A. Q. Khan) entered into this foray.

Abdul Qadeer Khan (A. Q. Khan), The Father of the Pakistan’s Nuclear Bomb –

Abdul Qadeer Khan was born in 1936 in Bhopal, British India. With the partition of India, he along with his mother and siblings migrated to Pakistan where they settled in the first capital of Pakistan, Karachi.

Although, it’s an irony that his father decided to stay in India. A. Q. Khan’s father died in India in 1956.

When Abdul Qadeer migrated to Pakistan he saw death and humiliation. In fact, that Anti-India or I would say anti-hindu feeling developed in him at that time which he carried in his heart and mind forever.

So, A. Q. Khan gave his services to Pakistan in developing the nuclear weapons. In fact, during the tenure of Zulfiqar Ali Bhutto (1971-77) and the dictatorship of General Zia Ul Haq (1977-88) Khan became larger than life.

Although, during the late 1980s and early 90s Pakistan had acquired the nuclear technology but due the international pressure especially from the United States they avoided conducting the nuclear tests.

But, when India conducted its second nuclear tests in May 1998, Pakistan decided to detonate its own and gave a strong message to its nemesis India. That’s why Pakistan carried out six nuclear test explosions between 28 and 30 May 1998 at the Chagai hills in Balochistan.

With the nuclear explosions Pakistan showed its power. And A. Q. Khan acquired a cult like status in Pakistan. He became a larger than life figure. And acquired the status as the father of the Pakistan’s nuclear bomb.

In fact, not only he helped Pakistan in developing nuclear weapons but he also became a source of shame when he was caught in the illicit transfer of nuclear technology to rogue States like Libya.

Although, he also shared nuclear technology with countries like Iran and North Korea. But, the last nail in his coffin was laid when he shared nuclear secrets with Libya.

Although, majority of the people in Pakistan believes that he is innocent and he was framed unnecessarily by the authorities.

Nuclear proliferation and its repercussions –

Although, Pakistan is a nuclear powered nation but it also carries a tag of the illicit exporter of the nuclear technology to countries like Iran, North Korea and Libya.

Iran became the first client of A. Q. Khan in sharing the nuclear technology. Although, the authorities in Pakistan was also involved in this act.

North Korea, One of the most secretive nations on this planet earth. With North Korea, Pakistan arranged a technological barter arrangement. The latter helped them in nuclear enrichment technology and the former gave them the designs of the delivery systems i.e. The missile system which can carry the nuclear payload.

The delivery systems is as important as acquiring the nuclear technology. Because, without it you can’t use it. Either you deliver a nuclear weapon through air, sea or land. And with the help of North Korea, The Islamic Republic of Pakistan developed its missile systems.

We all are aware about the destruction that nuclear weapons can cause. Although, people like A. Q. Khan was caught but imagine if terrorists outfits acquire nuclear weapons then the results would be unimaginable for the humanity. That’s the most dangerous thing about the nuclear proliferation.

This world of ours can’t afford another Hiroshima and Nagasaki. Rogue States and non state actors should be stopped at all costs from acquiring nuclear weapons at anyhow. That’s should be the motto of the world powers and the international organisations.

I’ll conclude with these words of Mahatma Gandhi –

An eye for an eye makes the whole world blind.