Portrait Of A Martyr, The Life And Times Of Syama Prasad Mookerjee

Portrait of a martyr, but instead of telling about the life and times of that martyr. The author consciously demeaned the other martyrs of the Indian freedom movement. Especially, the first PM of independent India. A hagiography.

Leftist, Centrist and Rightist. The majority of the people will find themselves in either of these three categories, isn’t it. The same can be said about those people who led the movement to free India from British colonialism. In fact, the doyens of the Indian freedom struggle, be it Mahatma Gandhi, Jawahar Lal Nehru, Sarojini Naidu, Maulana Azad, and even Sardar Patel can fit into the Centrist category of the political thoughts.

Even today this Centrist approach remains quite popular and acceptable to the multitudes of India. But, those who find themselves on the opposite side of the spectrum, i.e. The Rightists, were also there during the independence movement. And the man who became a leading light for those who professed a rightist ideology was none other than, Dr. Syama Prasad Mookerjee.

So, let’s see what this book apprises us about him and his thoughts.

What is Portrait of a Martyr by Balraj Madhok?

Portrait of a Martyr is a hagiography written by Balraj Madhok of the founder and the first president of the Bharatiya Jana Sangh, Dr Syama Prasad Mookerjee. 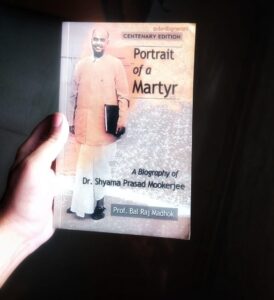 Although, there is nothing wrong in expressing one’s admiration and love for someone. But, it should not come at the expense of others. Especially, when you are writing a book.

In his biography of Dr. Mookerjee, the author got carried away because of his hatred towards Pandit Jawaharlal Nehru, Mahatma Gandhi, and others. In fact, for a reader who hasn’t read about the freedom struggle. This work can only prejudice him or her towards those who don’t subscribe to the ideology propagated by Dr. Mookerjee and others like him.

I recommend this book only to experienced readers. Especially, to those who don’t read with a glass of an ideology.

The son of a great educationist-

Syama Prasad Mookerjee was born to Sir Ashutosh Mookerjee and Jogamaya Devi, on July 7, 1901, Calcutta, British India. Sir Ashutosh was not only the former Vice chancellor of the Calcutta University; but he was also a great educationist of his time.

Being the son of a man whose room was full of books, young Syama Prasad, received not only a sound education. But, he also followed in the footsteps of his great father. During his schooling and graduation, which he completed with flying colours, he also assisted his father in his university work. This gave him not only the necessary exposure of such kind of work, but it also proved useful to him in his later years.

Although, Sir Ashutosh Mookerjee wanted to join politics but he couldn’t because of his sudden death in 1924. But, this dream of his was fulfilled by his son, who went on to become not only the founding father of an all-India political party; but also a Union Cabinet minister of independent India.

Education and entry into politics-

It’s an irony of irony, that Syama Prasad Mookerjee started his political career in 1929, when he was elected to the Bengal legislative council as a Congress candidate from the University constituency. However, later he quit Congress and won as an independent from the same constituency.

Later on in 1939, Dr. Mookerjee joined a right wing organization by the name of Hindu Mahasabha, and became its acting vice-president. He could have joined the Indian National Congress (INC). But, he was disillusioned with the policies of the Congress party vis-a-vis the Muslim League. And he was also inspired by the thoughts of the then president of the Hindu Mahasabha, V. D. Savarkar.

In fact, Dr Syama Prasad Mookerjee himself answered to his critics who questioned his decision to join the Mahasabha. He said,

So long as communal considerations loom large in the field of Indian administration and sinister Anglo-Muslim conspiracy continues, the Hindu Mahasabha must function as an active and fearless political organization which can both defend the rights of the Hindus and of India as a whole. So long as a third party remains in India and an aggressive anti-national and anti-Hindu Muslim league party holds its sway over the Muslim masses, enjoying the favours of the British Government, and planning to veto the elementary rights of the majority, Hindus for their sheer existence must have their own political organization to fight for their own rights and liberties. The political goal of Hindu Mahasabha is complete independence of India. It stands for joint electorates, if necessary with reservation of seats. It asks for no special favours for Hindus in any part of the country. Its aim and policy are consistent with the welfare and advancement of India as a whole.

The above statement by Dr. Mookerjee sums up his political thoughts and the kind of India he wanted to be after its independence.

In fact, in 1941, he joined hands with the founder of the Krishak Praja Party, A. K. Fazlul Huq, to form the provincial government of the United Bengal. And he became the finance minister of the United Bengal. To stop the Muslim league from forming a government in Bengal, Dr Mookerjee, at the behest of V. D. Savarkar, allied with Krishak Party, which also happened to be the party of Muslims.

Moth eaten Pakistan and the fight for West Bengal-

During the 1940s, the communal frenzy was at its peak throughout the length and breadth of undivided India. Especially, in the two provinces of British India. The first is Punjab and the second one is Bengal. Dr. Mookerjee was more concerned about the fate of the latter.

Being a staunch Bengali Hindu, he realised that if the whole of Bengal was awarded to the fancy land of Jinnah. Then, the situation of the Bengali Hindus would be like second class citizens. So, he along with several other stalwarts of the freedom struggle including some Congressmen, started demanding for the partition of Bengal.

And this continuous struggle bore its fruit when the United Bengal was divided into West Bengal for the Hindu Bengalis and other non-Muslim minorities. And East Bengal for the Bengali Muslims. Although, Dr Mookerjee played a leading role in this. But, those Hindu families who stayed in East Bengal remained in his thoughts too, even after independence of India.

In 1947, Dr Mookerjee was invited by the first Prime Minister of independent India, Jawahar Lal Nehru, to join his cabinet. However, the latter did this at the behest of Mahatma Gandhi. Because according to Gandhiji, not only Congress party but several others too also contributed in the Indian struggle for Independence. And the first Union Cabinet of independent India should be all-inclusive.

Dr Mookerjee accepted this proposal of Pandit Nehru and became independent India’s first industry minister. He wanted to keep an eye on the policies of the Union Government vis-a-vis Pakistan, especially towards the attitude of the latter towards the Hindu minorities of East Bengal (then East Pakistan, now Bangladesh)

Inside the Government, he regularly raised his voice for the Hindus of East Bengal. In fact, for two and a half years he remained as the minister of the Union Government. But, he’d had enough when PM Nehru and the first PM of Pakistan, Liaquat Ali Khan, signed the Delhi pact of 1950. And he resigned from his post showing his disapproval for this pact, which he knew that Pakistan wouldn’t follow, neither in letter nor in spirit.

Although, in 1948, Dr Mookerjee disassociated himself from the activities of the Hindu Mahasabha. The latter didn’t want to change its all-exclusive membership for Hindus only, and the former wanted that the membership should be opened for all Indians. And to face the all powerful INC, another political party was the need of the hour. That’s why in 1951, Dr Syama Prasad Mookerjee with the support of the Rashtriya Swayamsewak Sangh (RSS) founded the all India Bharatiya Jana Sangh.

As, Dr. Mookerjee laid the foundation and the guiding principles for the Jana Sangh. The issue of Kashmir also demanded his urgent attention. The people of Jammu under the leadership of Prem Nath Dogra of Praja Parishad, wanted the integration of Jammu and Kashmir with the Constitution of India. But, at that time the Kashmir issue was handled by none other than Nehru Ji.

And according to Jawahar Lal Nehru, No one knows more than him. I know everything. In fact, I, Me and Myself. That’s what he did when someone countered him with diverse views. And Dr Mookerjee was a fearless man. He not only met with the leaders of Jammu; but he also wrote several letters to PM Nehru and the then head of the Government of Jammu, and Kashmir, Sheikh Abdullah. But all in vain. At last when he realised that they were not paying heed to his calls, he decided to visit Kashmir. And in May 1953, he went there. However, he was arrested and put under house arrest. While there he had suffered a mild heart attack. But out of the blue on June 23, 1953, Dr Syama Prasad Mookerjee breathed his last in the valley of Kashmir.

His sudden demise from the Indian political scene was a serious blow to his newly created party. But, the fire which he rekindled in the hearts of his workers made him and his memories evergreen to them even today.