The Sensational life and death of Qandeel Baloch by Sanam Maher is a book which not only tells us about the tumultuous life of the first social media star of Pakistan and her brutal murder.

But, it also put forward several important questions related to the women safety. Especially, in the context of the online harrassment of women. 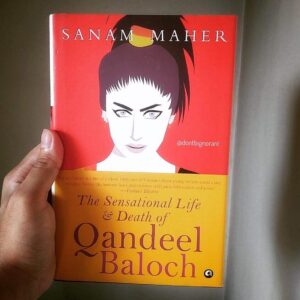 Although, the protagonist of this book was from Pakistan. But, her life will resonate with lots of women out there. Especially, those women who are challenging the patriarchy and the misogynistic notions about women.

So, let’s start by asking some important questions related to this person who is no more with us.

Who was Qandeel Baloch?

Qandeel Baloch was the first social media celebrity of the Islamic republic of Pakistan.

In fact, her real name was Fouzia Azeem. She was from a nondescript village by the name of Shah Sadar Din, Punjab, Pakistan.

She was married when she was only seventeen years old to an unlettered man.

She ran away from her in-laws home. Because, she saw a dream. A dream where she can live her life on her own terms.

She defied the so-called cultural and religious norms that’s why she was murdered by her brother in the name of honour. She was only twenty-six years old.

If you are from Pakistan then I’m sure you are already aware about this person which I’m writing about.

But, majority of the people, especially from the Indian subcontinent seldomly heard about Qandeel Baloch and why she was murdered.

Why Qandeel was killed?

The same society which leaves no stone unturned when it comes to the safety of women. But, they raise their voices selectively, isn’t it?

Qandeel Baloch was the victim of ‘honour killing’. And she was not the only one who killed in the name of so-called honour.

Although, Qandeel’s father compared his daughter with Benazir Bhutto, The first woman Prime Minister of Pakistan.

But, the same hypocrite People and society who enjoyed the videos and photos of Qandeel made her a ‘Pariah’ when she was alive.

Honour Killings and the online harrassment of women –

Lots of women in Pakistan were the victims of ‘Honour Killings’. And many more will die in the near future. Because, you cannot change a society by using a magic stick.

Although, being an Indian I can belittle Pakistan and say uncountable number of bad stuff about them.

But, only a jingoistic person can do such kind of things. Because, India is also not a safe heaven for women.

Be it Pakistan or India, honour killings are common in both the countries.

But, what kind of honour will a person or a society get when it kill someone.

Only God can answer such kind of question. Because even animals don’t kill each other in the name of honour.

The online world is too deep and the same time it gave you an anonymity to do uncountable number of things. That’s what makes it more dangerous.

The death of Qandeel opened the Pandora’s box in Pakistan.

Prior to her death the law in Pakistan allowed the family members of the deceased person either to Pardon or to accept the ‘Blood money’ as a compensation payment for the crime which shows that what kind of ludicrous laws they are following in the name of religion.

Although, they had rectified the loophole on the existing laws but how can you change the misogynistic mindset.

Crime against women is not restricted to India or Pakistan. It’s a global phenomenon.

Acid attacks against women are common. In India we have acid-attack Survivor like  Reshma Qureshi.

In Pakistan, women like Malala Yousafzai were targeted because they raised their voices for the girl child education.

Although, we need innovative methods and solutions to tackle the rising crime against women.

But, we also need to understand the reality. And the sad truth is –

‘The biggest enemy of the women is women’.

It all starts with the birth of girl child. Female infanticide is common throughout the Indian subcontinent.

The concept of ‘Paraya dhan’ (Other’s Property) is the notion which needs to be challenged through thick and thin.

Need of the hour –

A collective effort is what we need to solve any serious problem (s). And it requires the support of each and every person out there.

And when it comes to online harrassment of women. We need gender sensitive people not only in our institutions but also near the local thana (Police Station).

Because, people are not comfortable sharing their issues with the police officials as long as they remain insensitive.

We also need to spread awareness about the laws regarding online harrassment.

It doesn’t matter from which country you are from, but somewhere down the line we all are ignorant about the laws.

Proper seminars, debates & discussions, and People-to-People contact needs to be encouraged throughout the world.

Especially, in the context of online harrassment.

And we also need to keep in mind that no one is a saint out there. There are people who also misuse the laws for their heinous motives.

But, in general we need a change. But how. I’ll quote what Mahatma Gandhi said once :-

Start with your family. Support your sisters, daughters, mothers and your female friends.

Society cannot change within a day or two. It requires a constant effort day and night.

Although, we can’t bring Qandeel Baloch back to life. But, at least we can save the life of many more women like her.

A woman is like a tea bag – you can’t tell how strong she is until you put her in hot water.

Order your copy from your here –