Reimagining Pakistan, Transforming a dysfunctional “nuclear state”, is another well-written book on Pakistan. 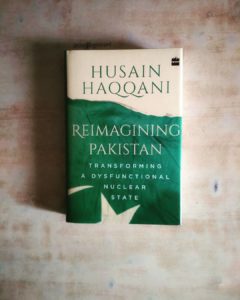 Pakistan, The jelly state and the most fragile nuclear power.

The USP of this book is that other than highlighting the serious problems which Pakistan is facing since its inception.

The author of this book also offered the solutions of these grave mistakes, which I hope Pakistan and its so-called ‘Deep-State’ will apply in letter and spirit.

If they really interested in removing the tag from Pakistan as a ‘Pariah-State’.

Pakistan and India gained their Independence at the same time on 14 & 15 August 1947.

But unlike India, Pakistan is either famous for harbouring terrorism or as the most unsafe nuclear state.

In fact when the Al-Qaeda chief “Osama laden was killed by the United States “navy seals”, in Abbottabad, Pakistan, then the world realized the hypocrisy and double dealings of Pakistan.

Why Pakistan sponsor and support terrorism and considered as the most unsafe nuclear-state?

And for finding the answers of these questions we have to travel back to the 20th century when Pakistan was formed.

Pakistan was created on 14 August 1947 by Partitioning of India.

And it was formed on the basis of religion, and in Pakistan’s case it was islam.

The founding father of Pakistan, Mohammad Ali Jinnah, demanded Pakistan on the basis of his ‘Two-Nation’ theory.

According to this theory, Hindus and Muslims are two different entities and they can’t live together.

Although, Jinnah succeeded in getting his dreamland Pakistan.

But his so-called ‘two-nation’ theory failed in 1971 when the Eastern wing of Pakistan rebelled against their own country.

And a newly created nation by the name of Bangladesh was born.

In fact, after the creation of Bangladesh, the hatred for India increased manifold amongst the Pakistanis, especially in the Pakistani army because of the humiliating defeat they received from the  Indian Army.

Although, Pakistan realized way back that they can’t defeat India in a Conventional warfare.

That’s why they started working on unconventional ways.

This method of Pakistan received the boost during the 1979-89, ‘Afghan-Jihad’ when Uncle Sam, Saudi Arabia, and Pakistan, trained and funded the “Mujahedeens” against the Soviets, which resulted in the Soviet Union withdrawal from Afghanistan in 1989.

And from 1989 to till now Pakistan is using these proxies against their arch-rival India.

Though these terrorists are now targeting Pakistan itself, and as the latter was created on the basis of islam.

So some of these terrorist organizations like Pakistani Taliban declared that either Pakistan enforce the Sharia law throughout the Pakistan or prepare for the fight.

That’s why Pakistan is considered as the most unsafe nuclear state.

Because by harbouring terrorism as a state policy, now these terrorists turned against their own state, and who knows that one day maybe any of these terrorists organizations will capture the nuclear weapons from Pakistan.

If that happens then the results will be disastrous for the humanity.

That’s why the author of this book hope that Pakistan and its all powerful army will shed its anti-india attitude.

And rather than considering themselves as the ‘citadel of Islam’ they will work towards the betterment for their nation.

Though it requires a thorough reinterpretation of the so-called Pakistani ideology, which is anti-india, and nurtures the conspiracy theories that whatever is wrong in Pakistan is either because of India or Jews.

After reading this I can say that if you are interested in reading about Pakistan only then go for this book.

For beginners I don’t suggest this book. The language of the book is also not that simple.

I hope you like this, Shukriya for reading, Jai Hind.