Sardar Vallabhbhai Patel, The Man Who Unified India by Balraj Krishna is a book which deserves to be read by every Indian irrespective of his caste, creed, religion and ethnicity. 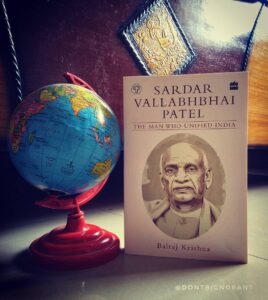 The main USP of this brilliantly written book is that within a few hundred pages the author told us about the immense contribution of Sardar Vallabhbhai Patel for the land of Hindustan and its people.

So, let’s ask some questions related to Sardar Patel.

Who was Sardar Vallabhbhai Patel?

Sardar Vallabhbhai Patel was the first ‘Deputy Prime Minister’, home minister and one of the most important founding fathers of Independent India.

Sardar Vallabhbhai Patel was born on 31 October 1875 to Zaverbhai Patel and Ladbai at Nadiad in the Kheda district of Gujarat, India.

His father, Zaverbhai was belonged to the class of cultivators, and his mother was a housekeeper.

One of the most important trait which Sardar Vallabhbhai Patel inherited from his father was the spirit of rebelliousness. And the quality of being humane from his mother.

In fact, during the first war of independence in 1857, Zaverbhai Patel travelled all the way from Gujarat to Central India to support the Rani of Jhansi, Laxmibai.

So, we can gauge that the spirit of serving the motherland is quite visible in Sardar Patel’s family.

Sardar Patel completed his schooling from Gujarat itself. He was always a leader from his school days.

Later for his higher education he went to London where he completed his degree in barrister in law, and came back to India.

Before meeting Mahatma Gandhi, Sardar Vallabhbhai Patel was a successful lawyer and a highly anglicised man who used to smoke heavily.

But as they say, ‘Destiny governs the lives of individuals and nations’.

And the fate had different plans for Sardar Patel.

In fact, the magnetism of Gandhi not only influenced Sardar Patel but he also discarded his anglicised lifestyle and adopted the frugality of Gandhi.

And he dedicated himself at the ‘Altar of Independence’ to free India from the yoke of British Colonialism.

Sardar Patel was the backbone of Gandhi’s Satyagrahas.

Be it Kheda Satyagraha, Nagpur Satyagraha, Bardoli Satyagraha and the famous Dandi March of Mahatma Gandhi, he lead from the front like a leader.

That’s why in the 1928 Bardoli Satyagraha movement the womenfolk of that place gave him the title of Sardar (leader).

Relationship with Gandhi and Nehru:-

Sardar Patel, Mahatma Gandhi and Jawaharlal Nehru were the most important founding fathers of India.

This triumvirate not only guided India rightly towards the path of freedom but they also made sure that the people of India always respect diverse views and accept others without being getting prejudiced towards any community, religion and ethnicity.

The relationship of Sardar Patel with Mahatma Gandhi and Jawaharlal Nehru was quite unique.

They not only respected each others diverse views but at the same time they balanced each others by acting on consensus no matter how small or big issues they had to face for their beloved motherland.

Contribution in the Indian Freedom Struggle:-

The contribution of Sardar Patel in the Indian Freedom Struggle and afterwards is not only immense but it’s unmatchable.

Sardar Patel not only stopped the Balkanization of India. But he also foiled the nefarious plans and agendas of people like Winston Churchill and Mohammad Ali Jinnah which they had for the people of India.

Before Indian independence the British divided India into two parts.

One is ‘British India’ and the other one is ‘Princely India’.

British India comprised of eleven provinces which were under the direct control of British administration.

These were the following eleven provinces of British India which were under the direct control of the Governor-General.

The Princely India consisted of more than 560 States. Some of these states were as small as a village and some as big as a country of size like France and Spain.

And states like Hyderabad, Jammu and Kashmir were the biggest Princely States of India and the most troublesome.

Sardar Patel not only assimilated these Princely States into India. But, at the same time it was a ‘bloodless revolution’ against the princes and their kingdoms.

In fact, During his visit to India in 1956, Soviet leader Nikita Khrushchev felt so overwhelmed by Patel’s achievement as to observe :

“You Indians are an amazing people. How on Earth did you manage to liquidate the princely rule without liquidating the princess.”

A Strong and an United India is the biggest gift which Sardar Patel gave to the people of Hindustan.

And to administer a country which is as diverse as India he created ‘All India Services’ which not only prevented the chaos after the departure of British from India, but at the same time it acted as a steel frame of the Indian administration.

What we can learn from the Iron Man Of India:-

People of India can learn lots of things from Sardar Vallabhbhai Patel.

The first and the foremost is the unparalleled love which he showed throughout his life towards his motherland.

Secondly, he was a patriot who never shied away from criticizing his country and people when needed.

And most importantly throughout his life he lived for Hindustan and he died for India. A rare quality indeed.

That’s why the ‘Statue Of Unity’ is erected to commemorate his achievements.

Sardar Vallabhbhai Patel was a patriot, a great administrator and a great man.

‘No Force on can stop an idea whose time has come’.

I strongly recommend this book to all the readers out there.