Set At Odds, Stories Of The Partition And Beyond

Set at odds, stories of the partition and beyond tells us that history is not only linear it’s circular too. As, they say, what comes around goes around. Those who left the land of their forefathers came back again in one way or the other. Some of them felt nostalgic and some realised that they were not only identityless but also stateless. Storytelling at its best.

When partition of India took place in 1947, there were chaos everywhere. Hatred, malice and distrust became the law of the land. Even at that darkness there were some people who made sure that evilness won’t triumph over goodness. Through their good deeds they made that possible. And these people were not politicians or bureaucrats, they were common people who bore the brunt of the horror of partition.

In fact, History which we all read seldom talks about such kind of people, isn’t it. But, in reality these were the people which we can relate with easily, because they were part of that society from which we all associate with.

So, let’s see what set at odds tells us about such people.

What is set at odds by Prafulla Roy?

Set at odds, Stories of the partition and beyond is a collection of twelve short tales related to India’s partition. The majority of the stories in this book talks about the people of Bengal and the experience (s) of the Bengalis of partition and thereafter. 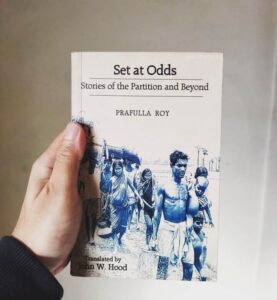 Originally the book was written in Bengali language. But, it’s translated in English by John W. Hood. And I enjoyed reading this book. I also recommend to you as a reader that make sure you should read this book too. Although, make sure you read this book slowly and steadily. Each story has a particular message to convey. So, read it diligently.

The book contains the following stories,
. The boatman
. One king goes and another king comes
. The island in the river
. The dream train
. Unlawful entry
. The destination
. For a little while
. Where there is no frontier
. The father
. The foreigner
. Roots
. Stateless

And we’ll talk about two stories out of the twelve mentioned above.

Farid was born in East Pakistan (Now Bangladesh). His forefathers came from Bihar, India at the time of partition and settled in and around Dhaka. They all were urdu speaking bihari muslims who bought the dream of a fairyland by the name of Pakistan. But, things didn’t work out as they thought.

Within a few decades of formation of Pakistan, civil war broke out in its eastern wing i.e. East Pakistan. And a new nation by the name of Bangladesh was born. The Bengalis of East Pakistan chased away the urdu speaking muslims of bihar.

So, another exodus began. This time in reverse direction. Although, Farid had heard stories about the land of their forefathers from his family but he never thought that one day he will go back there on his own. But, destiny had planned something else for him.

So, in the darkness of night, farid along with his family members and others, entered into the border town of Bihar, although, illegally. Isn’t strange that few decades ago his father who was a British Indian citizen, opted for Pakistan then became a Pakistani and then a Bangladeshi. And now his son came back again to the land of his forefathers in search for an identity.

Although, farid and those few hundreds who came from East Pakistan after the formation of Bangladesh, were scared that they will be chased away from here too. But, in independent India they found that the only people who can save them from this mess were politicians.

In fact, luckily it was the time of elections. And they found the most powerful politician of that town of Bihar. Farid and others kowtowed in front of him. And the latter knew the importance of these illegal people. He took a promise from farid and others like him that they will vote for him in the elections and he will make sure that no harm will come their way.

Within a few days of their arrival, Farid and others received their new identity. Indian ration cards. With that they became one of the many multitudes of India. Thanks, to democracy!

When there is no frontier-

Adbur Hussein was only nine years old when he along with family left India for Pakistan. They were among the many urdu speaking families of the state of UP (then United Province, now Uttar Pradesh) who had settled in and around the first capital of Pakistan, Karachi. They were given the tag of Mohajirs (Urdu speaking muslims from India who came to Pakistan after its formation) by the aboriginals of Pakistan.

Although, Abdur had his family home in Azimabad, UP. But, there was another connection which made him think about India. And it was his elder sister who stayed in India after her marriage. She and her In-laws decided to stay in Hindustan even after the partition.

But, with time memory fades. And after few decades the young Abdur became himself quite old. He was quite contained with his life in Karachi. But, he decided that not only he visit the shrine of Muinuddin Chisti, in Ajmer Sharif, but he’ll also visit his elder sister in Azimabad.

Although, before leaving for India, his neighbors had cautioned him that in India being a Pakistani and a muslim he should remain vigilant all the time. And with all of this in mind, Abdur came to India.

As soon as Abdur landed his feet in India, he noticed nothing different from the country from which he came. In fact, no one even noticed him.They were all like him. Speaking the same language.

In fact, when he came to Azimabad, his experiences made him feel numb! In the town not only he met his childhood friend, Dhanua but he also met Dhanua’s father who at the riots of partition torched his home. And because of that they had left for Pakistan.

Although, Dhanua’s father said to Abdur with a very heart that during the time of partition they were not in right frame of minds. And he was sorry for his act. In fact, when Abdur’s family left for Pakistan, it was Dhanua who at the behest of his father took care of the elder sister of Abdur and also settled her son.

For Abdur it was all surreal! He thought that before leaving he had heard so many strange things about the country where he was born. But, the kind of love which he received made him realise that there are good and bad people everywhere.

And with good memories, Abdur left with a promise that he will return soon.

Let me conclude with these words,