Shoes Of The Dead, A Kota Neelima Novel

Shoes of the Dead is among those few Indian novels which possess the power to rattle the conscience of a sane reader, especially those who are from India. A story which tells us the plight of the Indian farmers, and the disdain of the lethal combination of politicians and bureaucrats towards them.

Several decades ago, Mahatma Gandhi said that, India lives in its villages. In fact, the profession which he himself used to associate with was farming. He considered himself a farmer first, rather than anything else.

In fact, he couldn’t have imagined that the situation of the farmers would remain so deplorable even after seven decades of Indian Independence. But, that’s the horrific reality which any sane and self aware Indian can vouch for.

Although, it’s an irony that you will also come across people in India who says shamelessly that ‘Sab Changa Se’, ( Everything is fine), isn’t it? These people are those who are either born with silver spoons in their mouth or they are the new age Kumbhkarns (A character in Ramayana), who can even deny the existence of the sun and moon just to keep their masters happy.

But, the ground reality is totally different. In shoes of the dead we’ll see it in its pure form.

What is shoes of the dead by Kota Neelima?

Shoes of the dead by Kota Neelima is the story of an Indian farmer who committed suicide due to crop failure and debt. And the justice for which his brother fought valiantly and died not only for his family but also for others like them. 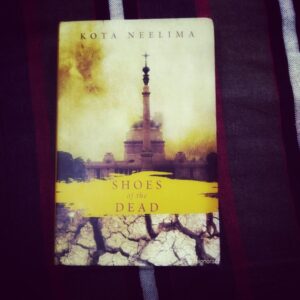 Shoes of the dead, Kota Neelima

The others like them were those farmers who also killed themselves due to constant humiliation and debt.

I strongly recommend this novel to Indian readers. In fact, it will also apprise you about the vicious and inhumane Indian system, which we all (laypersons) face in one way or the other in our lifetimes.

And more importantly this story proved that if media and journalists remain true to their profession. Then, a common person can challenge anything unjust. Because, anything without an agenda could be productive.

The death of a farmer –

Sudhakar Bhadra, an ordinary Indian farmer killed himself by consuming pesticide. The father of two young children gave up his life. The constant humiliation from the moneylenders and the successive crop failures led him towards this path.

The district committee of suicide which awards One-lakh Indian rupees as compensation to widows of those farmers whom they think committed suicide due to debt declared the case of Sudhakar as ineligible. That’s not enough. In fact, according to them he was an alcoholic and due to depression he killed himself. That’s their official statement.

Majority of the members of the committee always voted against the farmers until Gangiri Bhadra came to the scene and it changed everything.

The battle for justice –

Gangiri, the younger brother of Sudhakar came to his native village, Gopur, after the death of his brother. He left his job as a teacher when he came. He was a well educated young man who spoke both Hindi and English fluently.

Being a son of a farmer, Gangiri knew that life hasn’t been kind to him and his family. Still, he fought against the odds and educated himself. In fact, he wanted to bring Sudhakar and his family to the city but now he know he couldn’t.

But, Gangiri took a vow, that he will fight for the justice, the rightful justice not only for his brother but also for other farmers whom the world considered dead even when they were alive.

So, first Gangiri got himself appointed as a member in the district suicide committee against the wishes of the majority of the members. The district collector had to appoint him even though personally he was against it.

As a member of the district committee, Gangiri noticed several loopholes in the cases and he also came across that the government officials were in cahoots with the maha sarpanch Lambodar and the money lender, Durga das.The latter always voted against the farmers. Neither they had any sympathy towards their families nor they care. What they care was the interest they charged on the money which they lend to the farmers and how they can grab their land after their death.

But, after the inclusion of Gangiri in the committee the numbers of farmers death started being counted as eligible for the compensation. He used his brain when it comes to handling the corrupt bureaucrats. Although, this made him a thorn not only in the flesh of Lambodar and Durga das but also the Member of Parliament (MP) of that district. The son of a well known Indian politician.

And in India, we all are aware that how politicians treat their rivals. Especially, when someone raise their voice against the tyranny of the system. A rumour would’ve been enough to finish them for good, isn’t it.

Although, a man or a woman who grew up against the odds in India and achieved success, knows how to handle the situations and rumours. Especially, when they are against those who inherited power I.e the sons and daughters of politicians who considered that it’s their divine right to rule over the multitudes of India.

As the cases of farmer suicides started being labelled as eligible, the pressure on that MP of that district also increasing. Although, being the beloved son of a national politician, his father saved him from the hard reprimanding from his political party. But, his father knew he had to do something to save his son from this mess.

He gave his son few advices that how to kill two birds with a stone. But, neither of them worked. Because, Gangiri was a smart man whom they can’t outmanoeuvred. Although, they tried to intimidate him. In fact, they took his signature that he was resigning from the district committee. But all in vain.

Although, Gangiri could’ve sold their land and home and went back to the city with his sister in law, his nephew and niece. But, he decided that he’ll stay and fight. He wanted to set an example for other farmers. That if he can do it then they can also.

But, in this battle of truth and justice, his sister in law, nephew and niece suffered a lot. And he couldn’t control his tears when he saw them in a deplorable condition. Although, through his efforts he changed the hearts of even those who used to vote against the farmers for no reason.

Widows and family members of deceased farmers thanked him for his continuous struggle for them. But, he couldn’t save the life of his nephew. Because of malnutrition and tuberculosis he died.

Gangiri, the man who fought so bravely against those powers of India, who can do anything to crush a voice. But, the guilt that his nephew died in his arms made him to do something unthinkable.

Let me conclude with these words,

I don’t want them to lose. I want them to change. If I am forced to quit, I can be replaced by any one of the deceased farmers kin. None of us can match the powers we challenge. It is an unequal fight, but we have the death on our side.