Siddhartha, but this Siddhartha is completely different from the world-famous and enlightened Siddhartha. Yet, he was like him, the exalted one. Even in contradictions they were like the same. Unity in diversity. A really thought-provoking novel.

The thrist for the eternal truth forces a handful of people to search for the meaning of life, people, surroundings and most importantly, about themselves. In the process of understanding all of this they wander from one place to another. They try to quench their unquenchable thirst for wisdom, so that they can attain the enlightenment.

But, the process is arduous; it’s full of challenges. It’s not everyone’s cup of tea. And those who pass the trials and tribulations of this process gain the eternal truth, become one with the infinite Brahman (Universe). And discovers an inner peace within themselves. They freed their atman, i.e., soul, from the cage which they themselves brought for them unconsciously.

When they freed themselves from the various cages of life. They realises that life is not linear; it’s circular. Things are interconnected. It’s just that they were not aware of it. And when they gained the wisdom from then onwards, life seems to them as it is, without ifs and buts. They accept it the way it is, without being affected by it. The same, the protagonist of this novel felt and went through. And became an enlightened soul.

What is Siddhartha By Hermann Hesse?

Siddhartha by Hermann Hesse, is the story of a young Brahmin boy, and his quest for gaining the true essence of life without being affected by it. And in this process he not only gained the eternal bliss; but he also met the ever-great, Gautma Buddha, the exalted one, the Shakya Muni. Though, he didn’t become his disciple; but the wisdom which he gained on his own made him like the enlightened, Gotama. 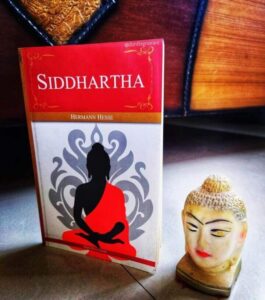 This novel by Hermann Hesse is of a few hundred pages. But, these few pages are heavy. Each page contains something in it. So, make sure you read this with peace of mind. Slowly and diligently try to understand what the author and the protagonist are trying to convey through this story.

Siddhartha, the son of a brahman (Scholar or priest), was well versed with the knowledge of Vedas and Upanishads. As a young and knowledgeable student, he was liked by his teachers and father a lot. Yet, even after knowing all of this, Siddhartha felt a void within him. And the teachings which we learned from his teachers were not enough for him.

So, one day, he asked his father that he wanted to become a Samana (wandering ascetics). He told him that he wanna go with the ascetics to the forest. So, that he will fill that void which kept bothering him and his thoughts time and again.

The same, thing he told to his beloved friend, Govinda. And the latter loved him a lot. So, Govinda said that he would go with him to. And become a Samana like him. However, Siddhartha’s father didn’t want his son to become a Samana; but he realised that he couldn’t stop his son either. So, he gave his permission. And Siddhartha bowed to his beloved father and mother before leaving his home forever for the search of eternal truth!

In the woods, young Siddhartha, learned several things from the ascetics. He mastered a few things. Especially, thinking, fasting, and waiting. Even after that the void in him remained. In fact, he even met and talked with the exalted, The Shakya Muni, Gautam Buddha!

But, even after that, that emptiness remained deep buried inside him. So, one day, Siddhartha told his friend, Govinda, that he’s leaving the woods and the Samanas. And going for the search of enlightenment towards a different place, far away from the woods.

The two friends bowed to each other. And Siddhartha went his way. And Govinda accepted the ways of none other than, Gautam Buddha. And became one of his many disciples. In fact, Govinda was amused when Siddhartha refused to become a disciple of the exalted one. For him it was all surreal. Still, being his beloved friend, he wished Siddhartha attain what he wished for.

The courtesan and the life

Siddhartha wanted to learn the art of love making from her. After leaving the woods, he reached the nearby town. And when he saw her for the first time, he decided that he would become her student. And gain knowledge of love making from this beautiful woman.

She accepted Siddhartha when the latter fulfilled certain demands of the former. He adorned new clothes and started earning money. And they started making love to each other passionately. They both made love. She taught him different forms of love making. Yet, they remained detached from each other. However, Kamala wanted to bear Siddhartha’s child.

Siddhartha, who a few years ago laughed at people because of their constant suffering due to their uncontrollable desires. And now he is doing the same. Money and lust overcame his learnings of the past several years. But, one day before making his last love to Kamala, Siddhartha decided he had had enough. He had to act before it’s too late. And so he disappeared from the town like a ghost. However, Kamala realised that she was pregnant with Siddhartha’s child. But, she also couldn’t stop Siddhartha. He was always like a free bird, isn’t it.

After leaving Kamala and his hedonistic lifestyle, Siddhartha, met several people. He met with his childhood and beloved friend, Govinda. He met a wise ferryman and became his assistant. In fact, after a few years, he even met Kamala and his son, who was named after him.

Siddhartha realised that all things are interconnected. Things which he once envied became a part of his life. Whether it’s lust, money, and jealousy. It was he who was running away from the life without accepting it in totality. And in that way, Siddhartha, the Brahman, who once left his home for the eternal truth; gained the wisdom of life through life’s experiences. And finally he became the enlightened one. The man who found peace within himself, and became one with the Brahman, the blissful Universe!

You can read this book for the following reasons,

2. If you wanna read a thought-provoking book.

3. A short book yet enlightening novel.

I hope you like this. Thanks, for reading. Jai Hind.

Let me end with this bon mot of Mahatma Gandhi,

You must be the change you wish to see in the world.