Sikkim: Requiem for a Himalayan Kingdom

Sikkim, Requiem for a Himalayan kingdom, is a very well written book on a topic which very few people in India are aware of. 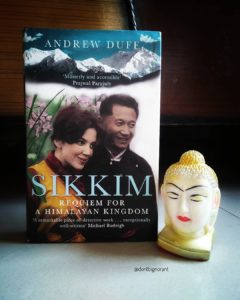 Sikkim, Requiem for a Himalayan Kingdom by Andrew Duff

So, before we start discussing about this book it would be better if we talk about this beautiful Himalayan state.

Sikkim, is one of the eight northeastern states of India. Its capital is Gangtok, and the world’s third – highest mountain, Khangchendzonga is located there. The people of this beautiful state worship this mountain.

It is also the ‘First fully organic state of India’. And it’s the only ‘Indian state’ which is exempted from paying income tax.

But do you know that Sikkim joined the Indian Union in the year 1975. Prior to that it was an autonomous Buddhist kingdom which was ruled by the ‘Namgyal Dynasty’.

So, here some of the important questions arises.

There were lots of reasons due to which this Frontier State had joined the ‘Indian Union’ in the year 1975.

But, one of the main reason because of which the people of this state had voted in the referendum of April 1975 to join the Indian Union, because they didn’t preferred the rule of a monarch (Chogyal or King), who was heavily biased towards his ethnic community rather than considering the people of his kingdom as a whole.

When India gained its Independence on August 15, 1947 at that time Sikkim was a ‘Protectorate State’ of the previous British India government. But after Independence rather than assimilating it in the Indian Union, the then Prime Minister Of India decided to maintain the same ‘Protectorate’ status of Sikkim which the latter had with the British.

That’s why India and Sikkim signed a treaty in 1950. According to this treaty Sikkim will remain as an autonomous Buddhist monarchy. But the subjects like defense, telecommunications and foreign affairs will be handled by the Indian government.

In short, from 1947 to 1975, Sikkim was a ‘Protectorate state’ of India and afterwards it became a part of the Indian Union as the ’22nd State of India’.

And yes the Chinese factor was there because of which the then Indian government decided to assimilate Sikkim as a new Indian state.

In short, this was done by the then Indian government because of the Geopolitics.

Importance of Sikkim from the security point of view for India :-

Sikkim is important for India because of its location. If you look at the Indian map you will realize the importance of this State.

When the Chinese invaded Tibet in 1950 then Sikkim became the ‘Frontier-State’ between the two Asian Giants, India and China.

For so many years Tibet acted as the ‘Buffer Zone’ between India and China.

But after the invasion of Tibet by Chinese, the geopolitical situation changed dramatically. That’s why this ‘Himalayan State’ became very important for India and its security.

Although, the author of this book showed his sympathy towards the last Chogyal (king) of this Himalayan Buddhist Kingdom. According to his viewpoint India had annexed the himalayan kingdom by using Carrot-and-Stick policy.

But overall this book is enlightening. I strongly recommend to readers to read this particular topic thoroughly.