Star Of The North: A North Korean Thriller

Star of the North by D. B. John emitting light on a country which can be termed as a planet within a planet. The nation is none other than  North Korea. The bastion of the infamous, Kim dynasty.

Although, officially North Korea is known as the Democratic People’s Republic of Korea. But, neither this East Asian state is democratic nor a republic. In fact, it’s a monarchy precisely a hereditary Marxist monarchy headed by the Kim Family.

Since, its formation in 1948, North Korea remained under the iron fist of the Kim-Il-sung clan. It’s an open air prison. A gaol where human beings are turned into living robots.

In fact, the words like human rights, freedom of speech, religion and expression have no place in this bizarre nation.

So, let’s see what the star of the North reveals about North Korea in this article.

What is the star of the North by D. B. John?

Star of the North by D. B. John is a thriller book about North Korea. Although, it’s a fictional novel but it’s based on the stories of those North Koreans who years ago defected to United States or South Korea. 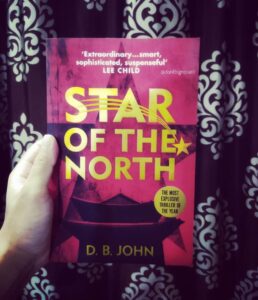 Star of the North, A Thriller book about North Korea.

From the first page of the book to the last, the story is not only intriguing but it’s full of twists and turns. A must read.

In fact, the author of this book himself visited North Korea.

Williams Soo min, a Korean-American was enjoying the calmness of the beach and the coolness of the sea water in an island of South Korea. Although, this island was nearby to North Korea but for Soo it didn’t matter.

As a teenager she was enjoying her time with her male friend. They kissed each other and enjoying their time together. She thought that she will tell about this experience to her twin sister who is faraway in the United States of America.

But, out of the blue she saw something strange. A flash of a light. And they were gone. Nowhere to be seen. Just their belongings were left on the seashore. Nothing else.

After few days of searching here and there, the police authorities declared them dead. They thought they were drowned in the sea.

For Soo’s family this news can’t be true. Her twin sister, Jee Min was shattered to the core after hearing about this incident. She can’t believe that her sister was gone.

Being twins they were so close to each other. Like two bodies but one soul. A magnetic connection between them. In fact, just to convince themselves about this incident Jee min along with her mother went to South Korea but to no avail.

They accepted the fact that Soo min is no more. In fact, their father also passed away after few months of this incident. Only Jee min and her mother left to look after themselves.

But, Jee min knew inside her heart that Soo min is alive. She can’t leave her alone.

Endurance and the will to survive –

Jee min carried on with her life. She started teaching as an assistant professor in one of the universities of the United States. In fact, she was a brilliant woman with radical ideas, especially her report on the North Korea advocated removal of sanctions.

But, one day she met a man who said that her sister maybe abducted by the North Koreans. For her this news was surreal. Although, she ignored that man but somehow she couldn’t ignore the words that man said about her sister.

That man was a CIA officer. He wanted Jee to join them. In fact, after thinking a lot especially about her sister, Jee gave her nod to join them.

After an intense training, Jee min became a CIA sleuth. Her expertise on North Korea was the reason of her induction.

Although, North Korea is inaccessible for the world. But, even after shutting itself from the world, the Kim-Il-sung clan can’t hide the vastness of the sky and the space above them, isn’t it.

Jee min saw what others ignored. With the help of powerful satellites she started monitoring North Korea. In fact, she found the location of a notorious compound known as the Camp 22. But, they can’t tell what’s inside the camp other than its remote location and the vastness.

But, this will change too. You just need a right person at the right time and the secrets will be revealed.

The Colonel and the Sleuth –

The relationship of North Korea and the United States could be best described as a love affair between a snake and a mongoose. The former like to test missiles and the latter love to impose sanctions. That’s how they treat each other, isn’t it.

But, in between all of this they also talk. These tete-e-tete is all about telling the Kim clan that they should stop testing the nukes and in return the Yankees will remove sanctions and also provide them some necessary aid.

Colonel Cho, A high ranking officer of the North Korea visited United States. Here, he not only delivered the message of the Kim dynasty but he also met Jee min. Although, nothing substantial came out from the meeting. But, when Colonel Cho returned to Pyongyang he was not only given a grand welcome but he was also bestowed with a prestigious award.

But, in Pyongyang no one is immune from the wrath of the Kim dynasty. And Colonel Cho will face this too. But, as of now he is safe.

As the meeting with the North Koreans didn’t go well so the Americans decided to send a peace mission to Pyongyang. Jee min was part of that mission too.

In Pyongyang with the help of Colonel Cho she not only saw her sister. But, she also came to know about some of the notorious programs of the Kim dynasty. Like the abduction program and the seed bearing program. In the former they used to abduct citizens of the countries like South Korea and Japan and by torturing them either they turned them into spies or they use them for other things. In the latter, North Koreans used to send female spies abroad where they find men of different races. And after having sex with them they came home to deliver the baby. These babies of mixed races will be nurtured and then they will be send as spies to different nations, especially the Western countries.

Although, Colonel Cho helped Jee min but he knew that sooner than later he will be caught and killed. In fact, being from a low songbun somehow he managed to reach to one of the top posts of the North Korea.

Some of you might be thinking what’s this Songbun. It’s basically a caste system that operates in North Korea. In fact, Hyeonseo Lee in her book, The Girl With Seven Names mentioned about that system too. I’ve written an article about her book also. If you wanna read then you can check out my article.

Albeit, that peace mission which brought Jee min and other Americans to Pyongyang also ended abruptly. But, this time Jee got too much of information. In fact, she saw her sister alive and healthy. But, for Colonel Cho it’s the starting of something dangerous and painful.

As, Jee and others reached safely to America. But, for Colonel Cho its the beginning of a life full of hell. He was tortured and declared as a traitor. The officers of the Kim dynasty wanted him to confess that he is a spy. But, he was not.

In fact, after beating him black and blue. They sent him to a gulag. Precisely to the infamous Camp 22. In this camp the regime used to conduct inhumane medical experiments on the human prisoners. No one could escape alive from his hell of a camp.

At the camp Colonel Cho met his real mother. She was working as a cook there. In fact, she helped Cho so that he can escape from the camp which he successful did.

In China, Cho called Jee min. And after a lot of deliberations it was decided by the US authorities that Jee will go undercover and bring Cho to the states.

Although, she reached China. But, they were busted by the Chinese state security. Jee min was taken to a nondescript place. And cho managed to escape only to be jump off from a bridge after realising that at least he helped someone whom his state considered as a citizen of an enemy country.

Jee min was taken inside a train. The name of the train is the, Star of the North. This train belonged to none other than, Kim Jong Il, the so called Dear Leader and the son of the Kim-Il-sung.

Jee was shocked to see Kim Jong il in person. The latter called Jee’s sister. She was there again in front of her. This time Jee told herself that she will take her away with her.

Within a few minutes the pandemonium broke out in the train. Jee was using all the arts which she learnt during her training as a CIA agent. Kicked, killed and maimed several North Koreans guards. And she took the hand of her sister and they jumped off from the moving train.

Although, she couldn’t save the life of Cho but she managed to track and save the life of her beloved sister. In fact, she knew that Soo min became a different person. But, she hoped that time will heal her too.

As, they were leaving for home. Jee asked Soo, why she jumped off from the train with her. In a nonchalant way, Soo said, because my son is in America.

As, I’ve said in the starting of my article that North Korea is a planet in itself. The only rule and the only regulation is the decree of the Kim-Il-sung clan. Nothing else matter in that country.

Not only they control the lives of their citizens but they also made sure that they don’t think anything other than the Kim dynasty. The propaganda machinery is so strong that none could escape from it.

In fact, dictators and even democrats-cum-dictators have copied so many tricks of the Kim-Il-sung clan. The first and foremost is the image of theirs which they post all of their country. You just need to look around your surroundings and you will find many Kim’s here and there, isn’t it.

A child educated only at school is an uneducated child.