Throughout our struggle I have not been concerned for myself but for the rights, welfare and freedom of my fellow countrymen and women. My reason for this is not simply a concern with borders and so forth. It is because I believe that the most important thing for humankind is its own creativity. I further believe that, in order to be able to exercise this creativity, people need to be free. I have freedom in exile. And, as a refugee for over sixty years, I have learned something of its value. Therefore, it would be wrong for me to return to Tibet before all Tibetans enjoy similar liberty in their own country. 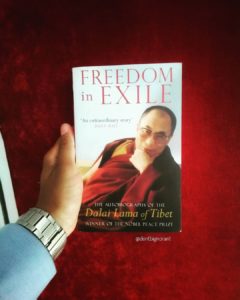 His holiness, The laughing Buddha.

Freedom in exile, is the autobiography of the 14th Dalai Lama of Tibet. And it is one of the few good autobiographies which I’ve read in recent times.

As his holiness, The incumbent Dalai Lama is a renowned personality and he doesn’t need any introduction.

But there are few important questions which arises when you read this book. 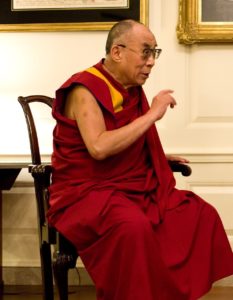 The Dalai Lama of Tibet, Sitting.

Who is Dalai Lama?

Dalai lama, is the spiritual and the temporal leader of the people of Tibet.

The word Dalai Lama means ‘Ocean of wisdom’. And it is basically a title.

The 14th Dalai Lama is considered as the reincarnation of each of the previous thirteen Dalai lamas of Tibet, who in turn considered to be manifestations of Avalokiteshvara or Chenrezig, Bodhisattva of compassion, holder of the white lotus.

The 14th Dalai Lama of tibet was born on 6 July 1935 in north-eastern Tibet. His parents were farmers.

The Chinese invasion of Tibet :-

Historically speaking, Tibet, was one of the most isolated places in the world.

That’s why when the Chinese invaded the land of Tibet in 1950s very few countries raised their voices against this Chinese aggression.

In fact from ages Tibet remained as the Buffer Zone between the two Asian Giants, India and China.

But with the occupation of Tibet by Chinese, the land of snow (tibet) became the direct border between the two countries.

The incumbent Dalai Lama was only fifteen years old when the Communist China invaded Tibet.

And the absurd reason which the Chinese gave for their occupation of Tibet was that they were liberating Tibet from the hands of imperialist powers.

Although, the people of Tibet resisted the Chinese occupation of their homeland but it didn’t proved successful because of various reasons.

The relationship of Dalai Lama with the Chinese government :-

With the occupation of Tibet by the Chinese, His holiness realized that it would be better if they co-operate with the Chinese Government.

That’s why he sent his representatives to the Peking (Beijing).

But very early he realised the Chinese way of handling the issues.

Deception, lies, double dealings are one of many ways which the chinese uses against their opponents. And the same they did with the people of Tibet.

On various platforms his holiness has raised his voice against the Chinese atrocities on the people of Tibet.

Against the ecological destruction of tibet by the Chinese.

And most importantly the lack of freedom of religion and speech which the people in Tibet is facing since the Chinese occupation of their homeland.

That’s why the Chinese government considers the 14th Dalai Lama of tibet as a rebel and a secessionist.

As the people of Tibet showed great amount of courage and dedication to save their country from the Chinese onslaught.

But sadly no one helped the people of the land of snow, and that’s why they became minority in their own homeland.

I will end with these lines of Gautam Buddha :-

Three things cannot be long hidden: the sun, the moon, and the truth.