Terror In Islamabad: A Thriller Novel By Amar Bhushan

Terror in Islamabad is a short read. But, each page of this novel tells us that being a spy is not everyone’s cup of tea. Only the bravest of the brave and the patriot of patriots would be willing to do a job which no one else could do.

Technology, a term which we all know how important is. But, even after the availability of different kinds of spyware gadgets no one could beat the intelligence of human operatives on ground, isn’t it.

Especially, while working in an enemy turf and not only gathering important information but also developing assets for his or her country is a task which only handful of people could do successfully.

In fact, those who people who works for the intelligence organisations are well aware that one mistake could take their life away from them. And worst they are not even recognised by their respective nations if they are caught alive.

So, Let’s see what the Terror in Islamabad tells us about a brave man, his story and the pain and torture which he had gone through in his lifetime.

What is terror in Islamabad by Amar Bhushan?

Terror in Islamabad by Amar Bhushan is a work of spy fiction. It’s based on a real story of an Indian spy who was brutally tortured in Pakistan. And the disdain which his own department showed towards him after he came back from the enemy land. 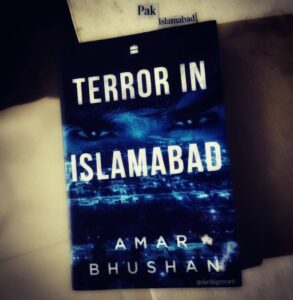 This novel is written in a easy to read language. And even a layman can finish it within a day or so. A good one indeed.

Veer Singh, an officer of the India’s external intelligence agency, R&AW was on a holiday with his lovely wife and children. Out of the blue he received a call that the Chief wanted to see him immediately. He had to follow the orders. No other choice.

Veer Singh never expected this news. The Chief told him that he had been posted to Islamabad as a cultural attache for a secretive operation.

His new name would be Amit Munshi. He had to raise the networks of informants deep inside the territory of Pakistan.

So, Veer Singh aka Amit Munshi gave a farewell bid to his wife and landed in Islamabad, Pakistan.

Amit was highly effective in his work in Pakistan. He used to follow a monotonous life while living in Islamabad. Neither he talked about politics nor about anything else while working there.

In fact, as soon as he landed in Pakistan, the surveillance agencies of the latter country started monitoring his each and every activity.

Although, his tenure in Islamabad would be for two years but it extended for almost three and a half. And for that long he worked under the nose of the Pakistani organisations and successfully fooled them.

In fact, he was about to leave Pakistan within a few days. As, his tenure had finished. But, he didn’t knew that the sleuths of Pakistan had planned something else for him.

Torture and the resilience –

Amit had received his farewell from his colleagues and most importantly before leaving he met the Ambassador of India to Pakistan, Mr Suri. The latter valued and admired the former a lot.

As soon as he left the Ambassador house, Amit was kidnapped by the ISI and its men. He was taken to an interrogation centre.

For the past three and a half years, Amit did his work judiciously. He never left his guards loose not even for a moment. But, why they took him when he was about to leave Pakistan for good. Amit said to himself.

As soon as they led Amit into the interrogation centre they started beating him mercilessly. They told him that he should confess that he was a spy and involved in subversive activities against the state of Pakistan.

But, Amit told them he was a cultural attache not a spy. His interrogators wanted him to kill brutally. So, they started giving him the torture of the worst kind.

They gave him electric shocks, burnt his thigh with a hot iron rod, urinated on his bruised face and punctured his foot with a nail.

But, even after this relentless torture, the men from the ISI were failed to extract any information from him. Although, Amit realised that he had to buy time. That’s why he told them he was from the agency but his work limited to administrative files. But, the Pakistani sleuths were so frustrated that they keep beating Amit. He became unconscious uncountable number of times during his interrogation.

Although, his agency had abandoned him but the ambassador made sure that Amit stayed alive. He did whatever he could to save him from the clutches of the ISI.

In fact, because of his relentless efforts the ISI had been forced to release Amit. Although, Amit had been declared as a persona non grata. But, he was alive and handed to the officials of the Indian embassy.

Although, Veer returned to India but for several months he remained in bed. No one from his department came to ask about his whereabouts and the pain which he had gone through in Pakistan.

The same people who once lauded his work started a conspiracy against him. He even thought of taking the voluntary retirement. But, he didn’t.

In fact, with the help of the Ambassador Suri he gained his confidence back and started his work for his motherland again.

A patriot can take a break but they don’t quit while serving their motherland.

Order your copy from here – Terror in Islamabad by Amar Bhushan