These are some of the best quotes which I came across while reading, Letters from a father to his daughter by Jawaharlal Nehru.

You can also read about my review of the book from here- Letters From A Father To His Daughter By Nehru.

Letters from a father to his daughter quotes-

1. We have rocks and mountains and seas and stars and rivers and deserts and fossils of old animals. These and other like things are our books for the earth’s early story. 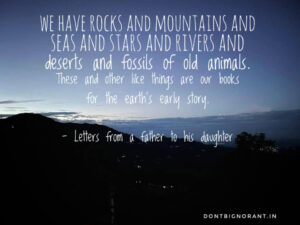 2. But it is good to remember that we are cousins of the ape and the monkey, and even now many of us, I am afraid, behave like the monkeys do. 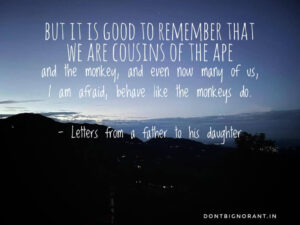 3. Indeed, it is intelligence that separates man from the other animals. There is practically no difference between a man without any intelligence and an animal. 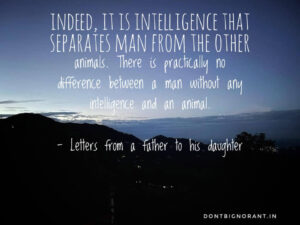 4. As, man’s intelligence grew, so also his power. 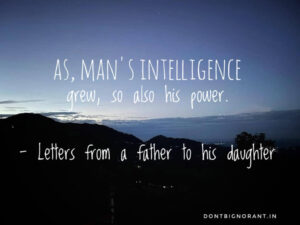 5. Everybody wants to think well of himself and his country. But really there is no person who has not got some good in him and some bad. And in the same way there is no country which is not partly good and partly bad. We must take the good wherever we find it and try to remove the bad wherever it may be. 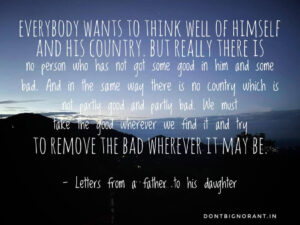 6. As Indians we have to live in India and work for India. But we must not forget that we belong to the larger family of the world and the people living in other countries are after all our cousins. 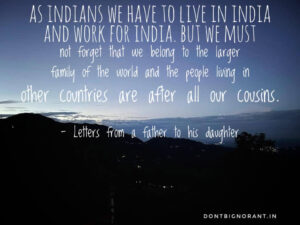 7. Fine buildings, fine pictures and books and everything that is beautiful are certainly signs of civilization. But an even better sign is a fine man who is unselfish and works with others for the good of all. To work together is better than to work singly, and to work together for the common good is the best of all. 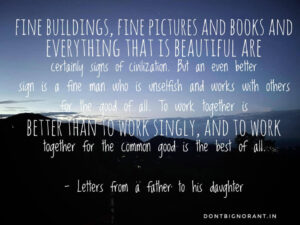 8. I am going to write you short accounts of the story of our earth and the many countries, great and small, into which it is divided. I hope (these) will make you think of the world as a whole and of other people in it as our brothers and sisters. 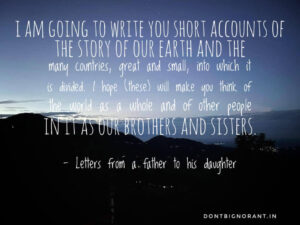 9. Trade can only exist when people are civilized. 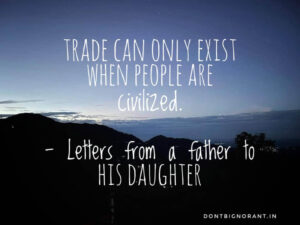 10. Every little stone that you see lying on the road or on the mountainside may be a little page in nature’s book and maybe able to tell you something if you only knew how to read it. 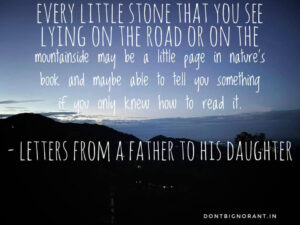 I hope you like these quotes of letters from a father to his daughter. Thanks for reading, Jai Hind.

You can also order your copy of the book from here- Letters from a father to his daughter book.