The 12 Best The Tattooist Of Auschwitz Quotes

The Tattooist Of Auschwitz by Heather Morris tells us that how Lale Sokolov, and other Jews like him suffered at the hands of the Nazis. In fact, their stories are just surreal. But, even after suffering a lot, Lale and other survivors of the Holocaust remained hopeful towards life and people. And that’s why some of the quotes of the Tattooist of Auschwitz also deserves to be looked at.

The Tattooist of Auschwitz Quotes

1. They’ve been warned, say nothing, do nothing.

2. Tattooing the arms of young men is one thing; defiling the bodies of young girls is horrifying.

3. We stand in shit but let us not drown in it.

4. What they all share is fear. And youth. And their religion.

5. We’re all in the same filthy boat.

6. I will live to leave this place. I will walk out a free man.

7. If there is a hell, I will see these murderers burn in it.

9. To him, all women are beautiful and he believed there was no harm in telling them so.

10. Be attentive, Lale; remember the small things, and the big things will work themselves out. 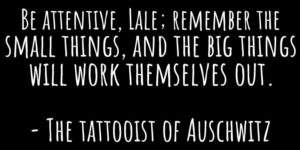 12. As long as we are alive and healthy, everything will work out for the best. 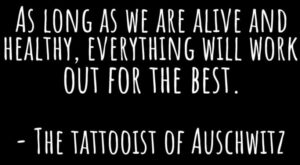 I hope you like these quotes of the tattooist of Auschwitz, Thanks for reading, Jai Hind.